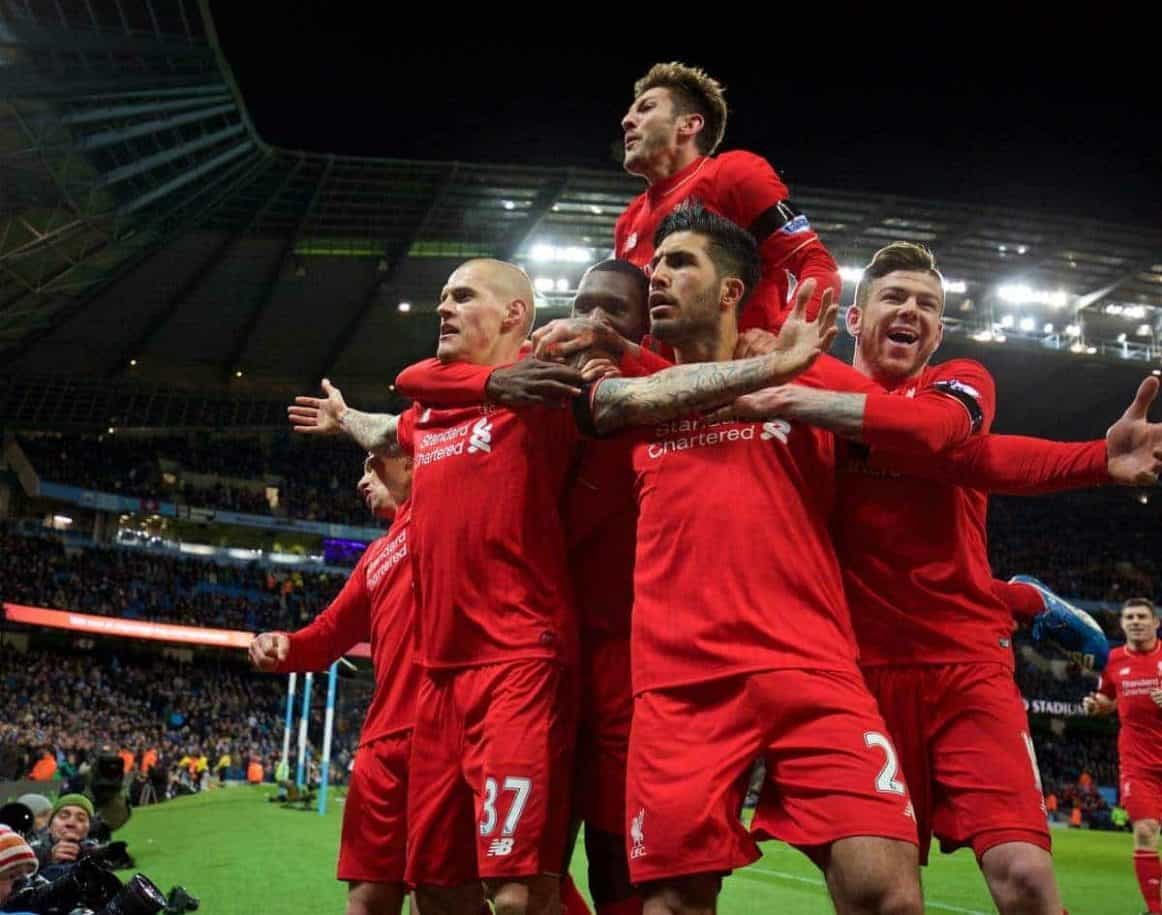 Every Liverpool player impressed in the Reds’ dominant defeat of Manchester City on Saturday evening.

The Belgian actually had very little to do; astonishing considering who Liverpool’s opponents were.

The 27-year-old did make a vital stop to deny Sergio Aguero in the second-half, though, and his handling was good from start to finish.

Clyne was probably one of the Reds’ least effective players, but he was still as solid as ever.

The England international showed great energy up and down the right flank throughout, but his error led to Aguero’s goal just before half-time.

A fantastic performance from Skrtel, who is capable of producing displays likes this now and again.

He was dominant defensively, both aerially and in his reading of the game, and his stunning strike put Liverpool 4-1 up to send the travelling fans wild.

The Croatian was under a lot of pressure to perform in the absence of Mamadou Sakho, but he produced a display full of heart.

Lovren was faultless for much of the game, and only a slightly nervy spell in the second-half prevents him from getting a higher rating.

Like Clyne, Moreno was probably more solid than spectacular. That’s a promising sign for the young Spaniard, however.

Defensively he did very well against Jesus Navas, and numerous lung-busting runs down the left gave Liverpool a constant outlet.

Lucas is arguably enjoying the finest spell of his Liverpool career, and he was again the glue that held the Reds together at the Etihad.

So much of what the 28-year-old does goes under the radar, but his use of the ball and expertise defensively were pivotal to the outcome of the game.

The 21-year-old has received some flack of late, but he was brilliant against Manuel Pellegrini’s side. His back-heel in the lead-up to Firmino’s goal was a delight.

The marauding midfielder showed boundless energy and class in possession, but there was also a maturity about him defensively that has been lacking recently.

Milner continues to look a little out of tune with his more creative attacking teammates, but he put in an incredible shift against his former club.

The Englishman never stopped running, and while a lack of quality on the ball was sometimes evident, his desire to win was second to none.

Lallana divides supporters, but this was a day when he showed exactly how good he can be.

Roberto Firmino and Philippe Coutinho will deservedly receive lots of praise, but Lallana was almost on a par with them. Creativity, movement and work-rate galore.

When Coutinho is at the top of his game, there are very few players in the Premier League with more influence on a game.

He was remarkable against City at times, scoring his side’s second goal and playing a key role in two others. A joy to watch. A potential hamstring injury picked up in the second-half is worrying.

What a performance from Liverpool’s other brilliant Brazilian, who came of age as a Reds player at the toughest ground to visit in the Premier League.

The 24-year-old was effortlessly brilliant, creating the first two goals- his pass to Coutinho was majestic- and opening his Liverpool account to make it 3-0. A wonderful player.

The 19-year-old was a lively presence when he came on, and played with great maturity.

Missed a good chance to score late on, but put himself about well.

This was a perfect managerial performance from Klopp, who continues to be worshipped by the Liverpool fans. It’s understandable.

The 48-year-old got everything right in his tactics, most notably his decision not to play a natural striker, and the team spirit he has created is fantastic. Everyone is in it together.

It’s easy to love Klopp as a person, but his magnificent management is the main reason for his popularity on Merseyside right now. Chelsea and City destroyed on their own patch within the space of a month.