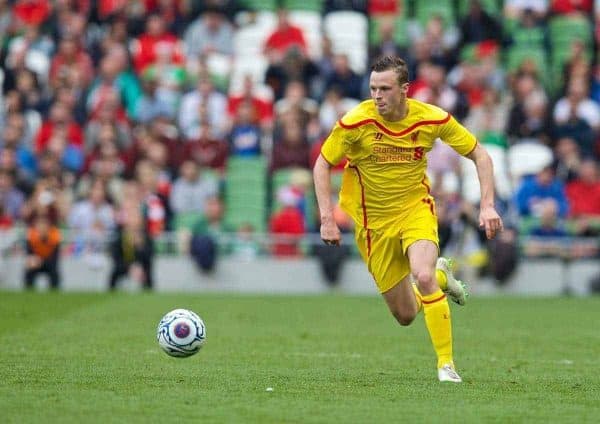 Brad Smith: Liverpool’s academy full-back coming back from the brink

Marking his first appearance for Liverpool in almost two years with an assist in Wednesday’s 6-1 win over Southampton, Brad Smith capped a remarkable comeback.

A surprise inclusion on Jurgen Klopp‘s substitutes’ bench for the Reds’ League Cup quarter-final away to Southampton, Smith will have been as staggered as the travelling Kop when he was brought on in place of Alberto Moreno with 77 minutes on the clock.

Liverpool were 5-1 up and cruising, but Smith’s introduction saw him make his first appearance for the first team in almost two years.

So as his inch-perfect cross was nodded home by an emphatic Divock Origi nine minutes after his arrival, Smith will have been elated.

The journey Smith has taken since his debut under Brendan Rodgers in 2013, a 2-1 loss away to Chelsea, has been long and arduous, and this was the most unexpected of comebacks.

The Australian-born left-back could be another welcome addition to Klopp’s fledgling squad.

A Summer in Purgatory

Brought on as a late substitute in place of Joe Allen at Stamford Bridge, Smith’s first touch as a senior Liverpool player was a deft flick with the outside of the boot around Cesar Azpilicueta.

Fielded as a makeshift left winger, Smith’s introduction came as a resourceful roll of the dice from Rodgers as Liverpool chased an equaliser.

But as Gary Cahill calmly mopped up this bold piece of trickery to clear out of the Chelsea defence, Smith’s bright start quickly faded—an encapsulation of his Liverpool career to date.

After signing for the club as a 14-year-old, on his move from Australia to England, Smith spent eight years working his way through the club’s academy ranks, turning out for England youth sides before becoming a full international with his home country in September of last year.

A key member of Michael Beale’s U21s side, Smith racked up considerable youth experience, as well as making seven appearances on loan with Swindon Town in 2014/15.

But with his contract expiring at the end of the campaign, Smith entered an unwelcome purgatory.

The 21-year-old spent the summer on Liverpool’s books, but able to negotiate with other clubs in search of a move away from Merseyside.

This took in trials with Norwegian Tippeligaen side Rosenborg and League One outfit Barnsley, to no avail.

Despite spending the summer out of action, Liverpool saw fit to bring Smith back to the club on a permanent basis, signing a new deal in November.

Strengths, Weaknesses and Style of Play

Smith has stood out within Liverpool’s academy sides due to his supreme physicality—something that has provided him with the platform to dominate through all age groups to this stage.

This is likely what drew the Reds to Smith in 2007, as this athleticism was key to his development.

“He was very athletic, very fast and committed to sport in general,” Troy Taylor, Smith’s former coach at Lennox Head in New South Wales, recalled in 2013.

“Brad held state athletic records and I’m just happy he stayed in the game. He could have played other [sports] with his ability. Lennox Head is a small town and it’s easy to cruise around, which is why some kids don’t reach their full potential.”

Taylor played Smith two age groups above his own age due to his quality and physicality, and believes the left-back stood out from the offset:

“The age group he played in was really talented. There was Jai Ingham, who’s on the books of Brisbane Roar now, and Jesse McDonald, who got to the final of the Football Superstar competition on SBS.

“Brad was twice as fast as all the other kids, and he was destined to get to where he is now.”

As Taylor attests, Smith is strong, quick and determined, providing Liverpool’s U21s with an invaluable option on the left flank.

Despite being only 5’8″, Smith’s stocky physique allows him an advantage over his marker, bulldozing down the touchline beyond backtracking defenders, and as he proved on Wednesday night, his end product can be of the highest quality.

Despite this, Smith’s inexperience at senior level is a major weakness, with the timing of his runs, the variety of his delivery and his covering in defensive areas still in need of work.

Turning 22 in April, he is at a crucial stage in his career—if he is to establish himself at Liverpool, it is now or never.

Can Brad Smith Become a Regular Fixture at Liverpool?

When Klopp arrived at Liverpool, his assessment of his inherited squad could have been gloomy: a patchwork of top-level stars meshed together by adequate squad players, with several glaring holes.

It was a thin squad, but the ever-positive German has taken an optimistic slant despite this.

Perhaps the weakest position on his arrival was left-back, with Alberto Moreno his only credible option on this crucial defensive flank.

Moreno has started in all but one of Liverpool’s 11 games under Klopp so far, and while the Spaniard is performing to a high standard, he is in desperate need of cover.

This may well have prompted Smith’s decision to sign a new deal last month, with Klopp’s focus on youth development and a paucity of options at left-back suggesting that he could carve out of position under the 48-year-old.

A substitute’s appearance at St. Mary’s may not have been the most significant, with Liverpool having already secured a comfortable victory, but it will have give Smith hope.

As a 21-year-old, the Australian will soon become a luxury at U21 level, so he must set his sights on a position in the first team.

This will no doubt come as Moreno’s deputy, as on the former Sevilla man’s form there is no usurping him within Klopp’s starting lineup.

But after coming back from the brink, and the desperate climes of Barnsley and Norway, Smith will be eager to grab this opportunity.

At this stage at least, Smith could well take up a place on the bench in the Premier League and in Europe.

Connor Randall, who improved as the night went on at right-back, offers a similar proposition on the opposite flank, and suddenly Liverpool look to have two reasonable options behind Moreno and Nathaniel Clyne.

Were it not for Klopp’s timely intervention, Smith may not have been a Liverpool player today.

But after a promising cameo in Wednesday night’s League Cup win, he can now dream of a future on Merseyside.

OPINION: Joe Allen makes his case to replace suspended Emre Can vs. Newcastle