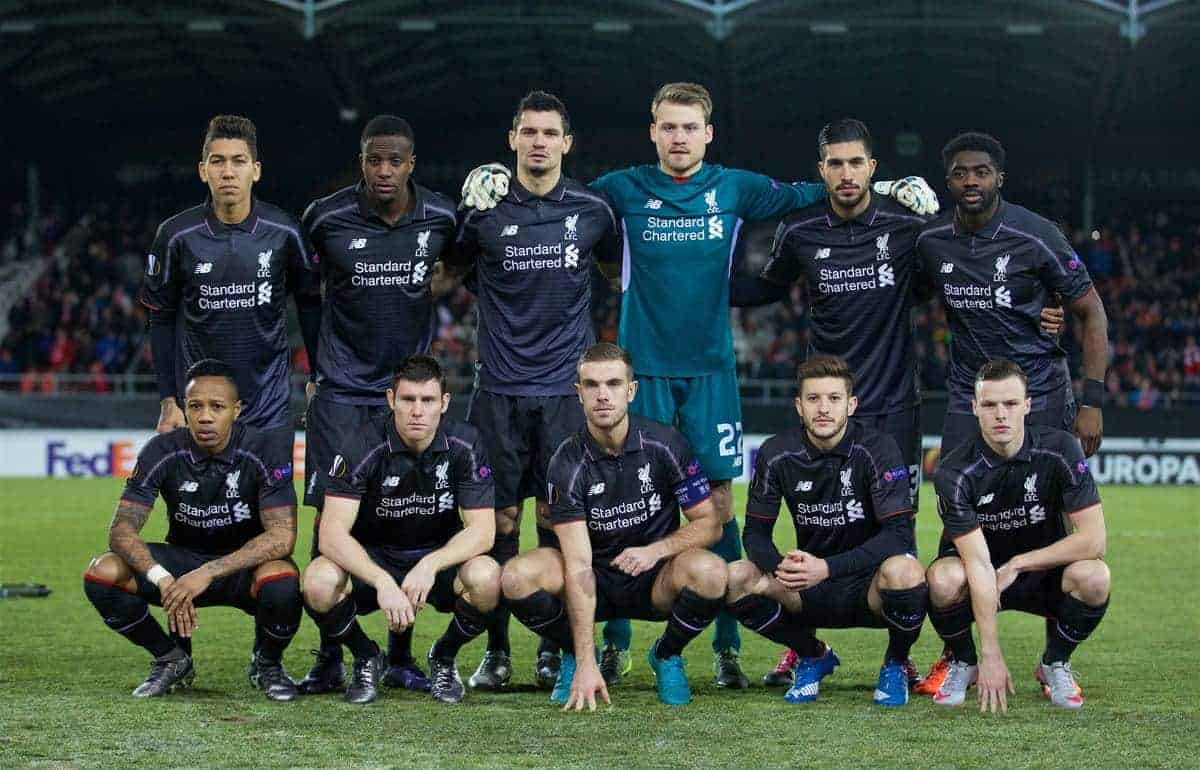 After Liverpool topped Group B with a bore draw against FC Sion on Thursday night, we assess the Reds’ performances in Switzerland. The Belgian ‘keeper enjoyed a comfortable evening in Sion where he was rarely troubled.

He was assertive when called upon though to balls over the top, reading situations well, and caused no reason for panic, dealing with what he had to decisively.

Clyne produced a solid if unspectacular display in his familiar right-back role, where he was booked for a rash challenge second half.

Negotiated the awful near side of the pitch well in the first period and was defensively strong and reliable in possession throughout.

The experienced Ivorian did what he had to at the heart of Liverpool’s backline where he defended solidly.

He took no risks, competed wholeheartedly and cleared his lines well which was all he was required to do on the night.

The Croatian centre-back has made a welcome improvement in recent weeks, but he wasn’t as commanding or composed in Sion where he turned in a sloppy performance.

His distribution was wasteful all evening and he was unconvincing in his defending at times which was slightly disappointing considering there was little to do.

Making his first Liverpool start marking an incredible turnaround of fortunes at Anfield, Smith was undoubtedly the Reds’ man-of-the-match on the night.

Strong, direct, and defensively sound, the Australian provided some excellent crosses from wide, and he was an unexpected but huge positive in Switzerland where he showed his capability to step in when needed going forward.

Another typically selfless and industrious performance from Liverpool’s vice-captain in the hour he played on the left of midfield.

He proved frustrating once again though with a real lack of quality, but can perhaps be forgiven for that due to the rock hard pitch.

The Reds’ captain produced an encouraging night on his first start since Bournemouth’s visit to Anfield in August.

He showed some nice distribution at times on a difficult surface and worked hard throughout in a positive 75 minutes on his return.

Can came straight back into the side after his one-match ban, taking up the holding role in Liverpool’s midfield.

He was tidy and composed with the ball as he tried to instigate some attacking play into a nothing match, and he dealt with danger well, competing fiercely in the middle of the park.

Taking his place in attacking midfield, Lallana turned in a hard-working performance off the ball and deserves credit for his attempts at producing when on it.

He was neat and tidy in possession, looked to join in with the isolated Divock Origi at times, and when moved deeper following Philippe Coutinho’s introduction he competed well in the middle.

It was a night of absolute nothingness from Firmino who turned in a really poor performance in the Reds attack, doing nothing to help Origi.

The Brazilian looked disinterested – shown as he ducked out of two second half challenges – and his link-up play and touch was dreadful; summed up by a woefully heavy piece of control after being put through by Coutinho in the second 45.

Credit must go to the Belgian youngster who worked tirelessly for absolutely no rewards in Liverpool’s attack.

Could have done better with Smith’s cross first half – going with his head rather than trying to volley home at an awkward height – but overall did what he could in a thankless task.

The Brazilian showed some nice touches on his return and released Firmino in on goal which his compatriot should have done better with.

A helpful and productive half hour run out for Coutinho as he seeks to return to fitness.

Coming on into the holding midfield role, the young Scouser broke up play well on a couple of occasions and used the ball intelligently and reliably when he had it.

The German named a very strong XI in Switzerland to ensure his side bounced back and topped Group B, and it did the job which must be commended.

But it was an unnecessarily strong selection for a game of little of significance for the Reds, and the chance to rest key men for a far more important visit of West Brom on Sunday should have been taken full advantage of, especially with Liverpool’s struggles post-Europa activity.

It’s frustrating Klopp passed this opportunity up by playing key personnel – especially with the difficult pitch which helped not one bit – and it remains to be seen at what cost the over the top selection comes at.