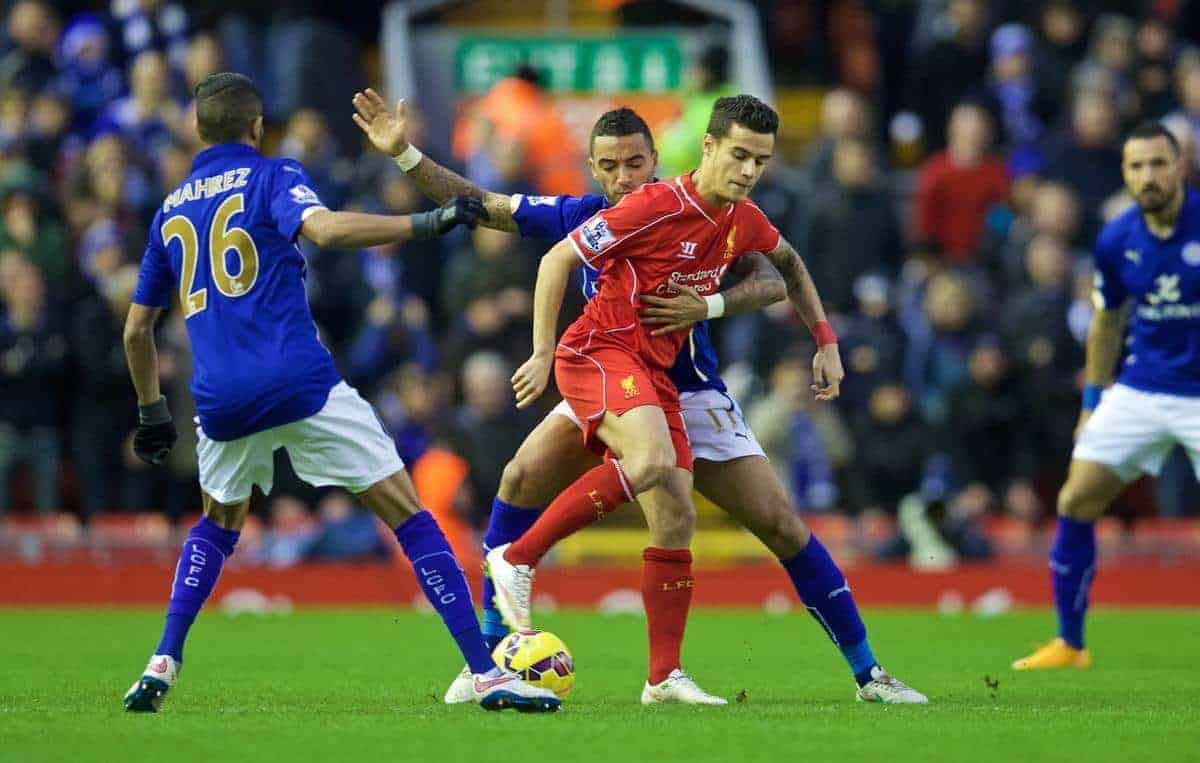 Jurgen Klopp’s side return to action at Anfield on Boxing Day with table-toppers Leicester City the visitors as the Reds look to end their winless run.

After an appalling start to the festive period, Liverpool look to end their four game winless run and put themselves back on track against Claudio Ranieri’s men.

Klopp’s side continue to make a terrible mess of a run of fixtures that should have seen Liverpool really progress after finding positive form, and the Reds need to begin reversing the damage immediately at an expectant Anfield.

Doing so will prove an extremely difficult task against the Premier League’s surprise package, and Klopp’s men will have to improve immeasurably from front to back to avoid finding themselves cut further adrift of the Champions League chasing pack.

Boxing Day will see the 103rd meeting between two sides and the 51st fixture at Anfield, where Liverpool have beaten Leicester on 27 occasions.

The Foxes are without victory on Merseyside in 15 years, having won on three consecutive visits before that winless run – the last being a 2-0 victory in May 2000.

Liverpool are unbeaten in six matches against Saturday’s opponents and have won three of the last four meetings, with the last clash a 2-2 draw on New Years’ Day when Nigel Pearson’s side sat bottom of the league.

Two first half penalties from Steven Gerrard – who announced his intention to leave the club at the end of the season after the stalemate – put the Reds ahead.

But a spirited second half performance and a quick-fire double courtesy of David Nugent and Jeffrey Schlupp denied Brendan Rodgers’ men three points to open 2015.

Ranieri knows what it takes to win at Anfield – he claimed a 2-1 win on his last Premier League visit with Chelsea in 2003 – and the Italian looks to repeat that to become the first side to defeat the Reds at Anfield in a Boxing Day fixture. The Foxes are enjoying a truly remarkable campaign, sat top of the Premier League with 38 points from 17 games, and they arrive at Anfield full of confidence and in excellent form.

Leicester have won their last three in a row and are unbeaten in their last ten games, having lost only once all season to title rivals, Arsenal.

Ranieri’s side have won seven of their last eight outings and have picked up the most points on the road in the league, posting six wins and three draws.

They are also the only side in the division unbeaten on their travels and have scored more goals away from home than Liverpool have managed all season.

In contrast, Liverpool’s form has nosedived rapidly after winning seven of eight games.

The Reds are on a miserable run, winless in their last four matches in all competitions, and have picked up just one point from the last nine available in the league.

A return to winning ways for Klopp’s side at Anfield is priced at 10/11, with a draw available at 11/4 and a fourth straight win for Leicester valued at 14/5.

Ranieri has a strong squad at his disposal, but the Italian does have a couple of injury concerns.

Goal machine Jamie Vardy isn’t one though, with the striker – who suffered a slight hamstring issue in the 3-2 win over Everton last time out – set to be fit to take part.

However, Jeffrey Schlupp, Matt James and Daniel Drinkwater will all definitely miss the Anfield trip.

Andy King – who Ranieri praised for his form since coming in – is likely to deputise again for Drinkwater, and the Foxes boss could name the same XI that won at Goodison Park.

Along with Vardy, the visitors boast numerous dangermen, and the Reds must keep a close eye on partner-in-crime Riyad Mahrez, who has been a revelation this season.

Klopp’s men will have to tighten up at the back to guard against Leicester’s blistering pace on the break, and dominating central areas to allow for instant pressing to keep the visitors on the back foot could prove key.

Klopp said prior to his first Boxing Day fixture:

“Ranieri is one of the most experienced and successful coaches in the world. There is big respect from both sides.

“You can lose football games but you have to take the right information from it. We must start better and be aware of counterattacks.”

Ahead of the Anfield trip, Ranieri said:

“In Liverpool, there’s a very good atmosphere and we’ll have to show our very best if we want to win there.

“I appreciate Jurgen Klopp a lot. I watched him in last season’s winter break and saw how he worked. Liverpool have a very good manager.”

The Anfield clash will not be shown for live television broadcast in the UK but can be found on NBCSN, FoxSports, beIN Sports and SuperSport around the globe.