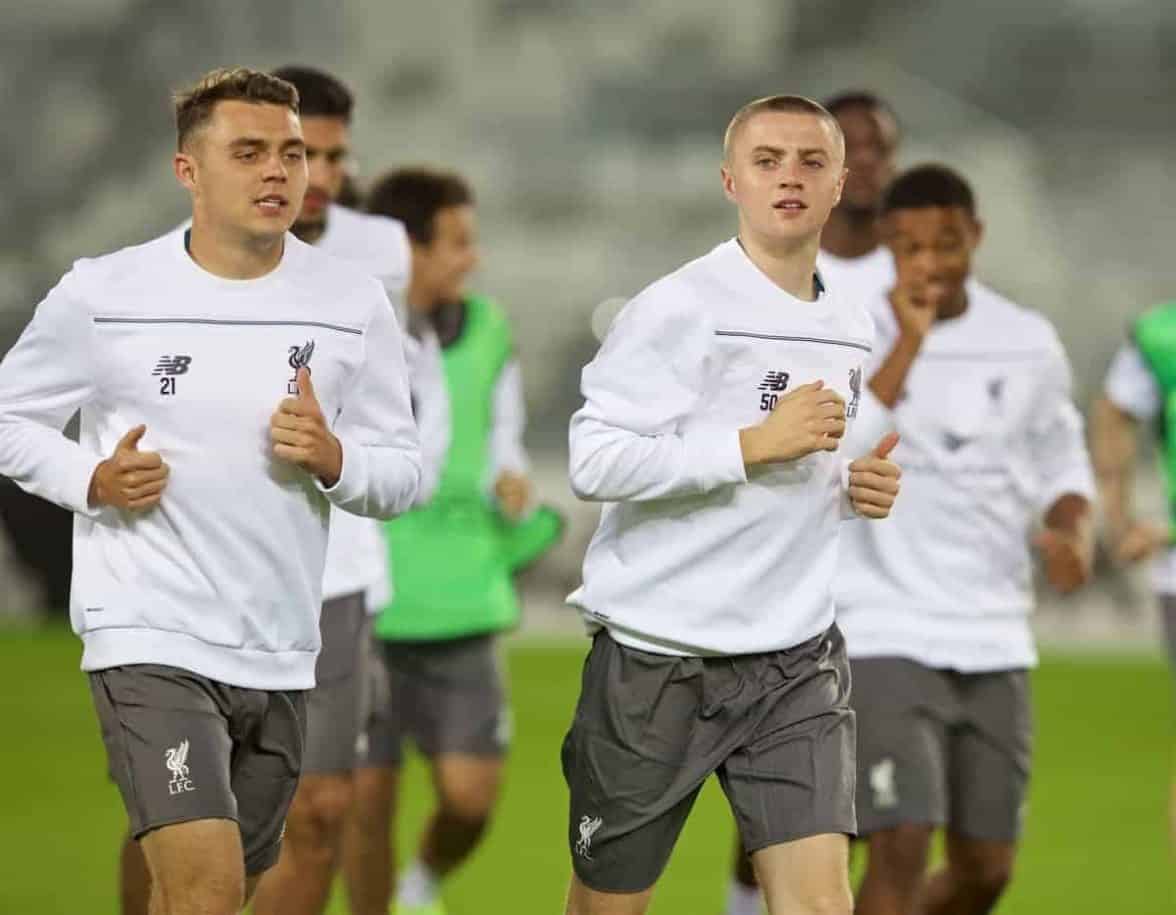 With Liverpool already qualified for the Europa League knockout stages, Keith Jowett takes a look at three Reds’ youngsters he’d like to see start in Sion on Thursday night.

Rossiter hasn’t featured heavily this term so far, mostly due to injury. Before Klopp’s hiring he made three appearances under Brendan Rodgers. His first Premier League appearance came as a sub in the 0-0 draw against Arsenal.

He made his European debut starting in the 1-1 draw away to Bordeaux in September. He then held his place in the starting eleven for the next Europa League match against Sion at Anfield.

In an unfortunate turn of events, Rossiter suffered a hamstring injury on England U19 duty in October meaning he’s yet to feature under Klopp. He returned to fitness with a strong outing for the U21s last week.

Rossiter provides a solid, tenacious base in midfield and will undoubtedly be looking to impress Klopp when given the chance.

Randall has been a part of Liverpool’s academy since the age of eight, making the step up to U18 football in 2012-2013. Since then Randall has risen through the ranks steadily.

In the latter of the 2013-14 season Randall began to appear frequently for the U21s, making 7 appearances. He has appeared twice for the first-team this season; starting in the 1-0 home win against Bournemouth in the League Cup and in the 6-1 thrashing of Southampton at St. Mary’s.

While he looked nervy at the start of the Southampton match he improved over the 90 minutes, growing in confidence throughout. If he does in fact start on Thursday it would offer the chance to rest Alberto Moreno. Moreno has featured heavily this season making 21 appearances. Nathaniel Clyne could play in the left-back role with Randall slotting in at right-back, as they did against Bournemouth.

Randall offers a strong, steady option at fullback. This match could provide him with valuable European experience.

Origi had a frustrating beginning to his Liverpool career. He had just come off a very poor season with Lille, having been named in Ligue 1’s worst team of the season.

Origi was handed his first start against Sion in a 1-1 draw at Anfield in early October. Things weren’t pretty after the match, with Brendan Rodgers seemingly blaming Origi for missing key chances. This did nothing but lower Origi’s confidence as he continued to struggle.

However, supporters have definitely seen an upturn in Origi’s game of late. He helped the side to a 6-1 win at St.Mary’s last Wednesday, bagging a hat trick. The Belgian showed us his finishing ability. His raw talent is coming to the fore. Klopp will surely look to use his pace and power in attack on Thursday night.

This match can be seen as a valuable chance for Klopp to evaluate the young players within his squad. Through this game he will be able to see the talent that these players possess when given the opportunity to shine.

I’d have included Joao Carlos-Teixeira in this list, but unfortunately he’s not registered in European competition (thanks Brendan!).