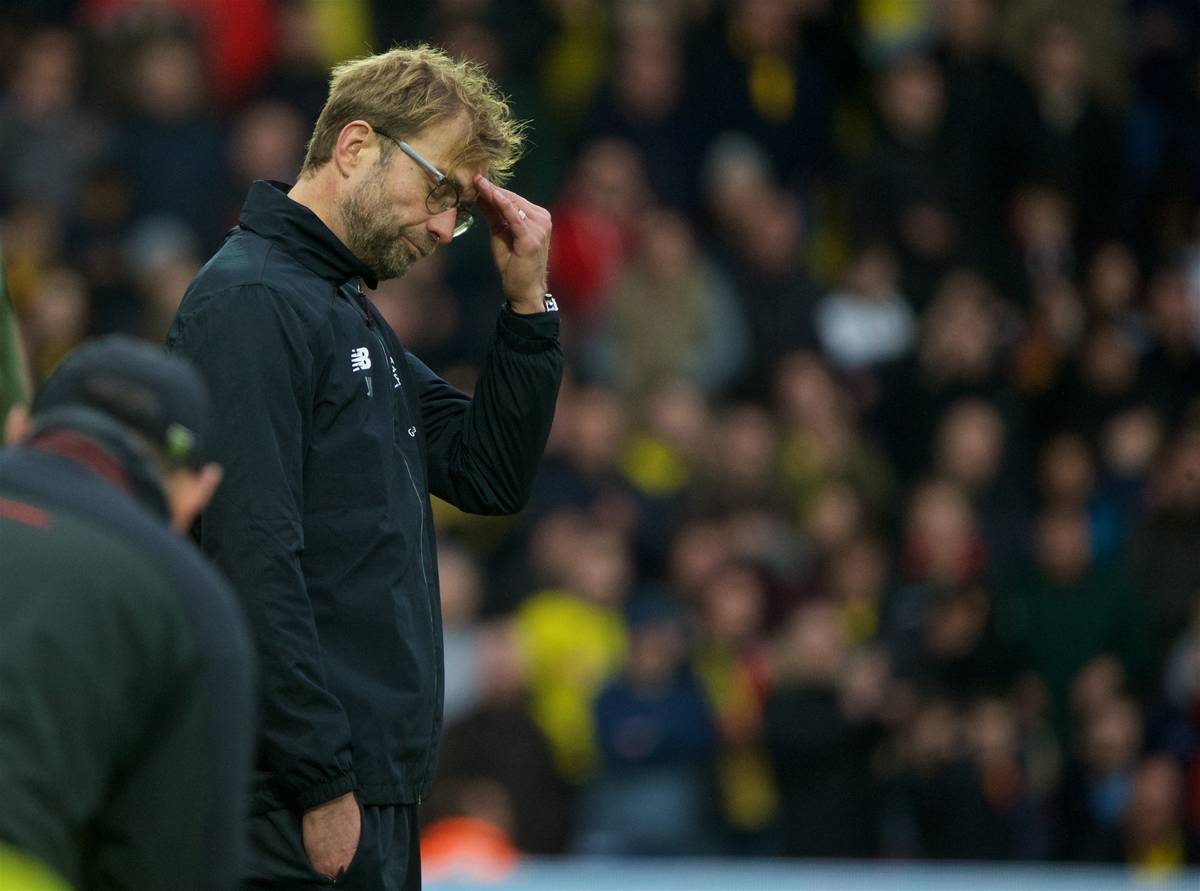 Jurgen Klopp hopes Liverpool’s 3-0 drubbing at Watford will prove the low point of his Anfield career.

The Reds boss admitted “we lost our minds” after Nathan Ake picked goalkeeper Adam Bogdan’s pocket for the opening goal at Vicarage Road.

The German boss admitted it may have been a mistake to leave Christian Benteke on the bench in north London, but downplayed rumours the Belgium striker could join Chelsea in January.

“The pitch isn’t the best one, but it’s possible to play if you play easy football, you have to use the wind, not play against the wind.

“That’s what Watford did with the second goal.

“We made bigger faults than the ref today.

“He (Bogdan) had both hands on the ball, so it’s a foul. I think that’s the situation, but that’s what happens – mistakes, faults, refs, players, that can happen, that’s football, the reaction has to be better.

“I would say hopefully it’s the most disappointing moment in my whole Liverpool FC life.

“We don’t feel good today of course. We came here to do something really different from what you saw.

“Between what we wanted to do and what everybody could see, there’s a big gap.

“After Southampton everyone thought ‘wow’ and after Man City. But that’s one part of what we can do. “Today we saw the complete other side and maybe the truth is somewhere in the middle.

“I know how strong this team can be and it’s my job to help them show it much more often than we have.

“It’s not that bad. Today was bad.

“The result is very bad, but I’m really disappointed about the reaction on the first goal because things like this can happen.”

Liverpool were rendered toothless in attack by Klopp’s decision to field Roberto Firmino as a false nine.

Divock Origi replaced the injured Martin Skrtel in a total formation re-jig just before half-time, but not even adding a focal point could alter the outcome.

Klopp conceded that with hindsight he may have selected a different starting line-up, but in the same breath defended his right to rotate his squad.

“That’s the next problem. If you lose the games everyone is allowed to ask why this player didn’t play, when they wouldn’t after you win,” said Klopp, when quizzed on why Benteke was on the bench.

“So okay maybe it was not the best decision, I don’t know. We will never find out.

Chelsea are reported to be targeting a January swoop for Benteke, who only joined Liverpool from Aston Villa in July, but Klopp attempted to dismiss such talk.

“If there’s the same probability in all the other transfer rumours I’ve heard since I’ve been here, then I’m pretty cool,” said Klopp.

“All I’ve read until now was nil per cent and I haven’t heard about this.”

“The impression I have now is that the ball was live,” said Flores, denying accusations of a foul on Liverpool keeper Bogdan.

“Ake was very clever, because he was in the right position to claim the ball.

“He’s always ready for everything and focused on the play.”