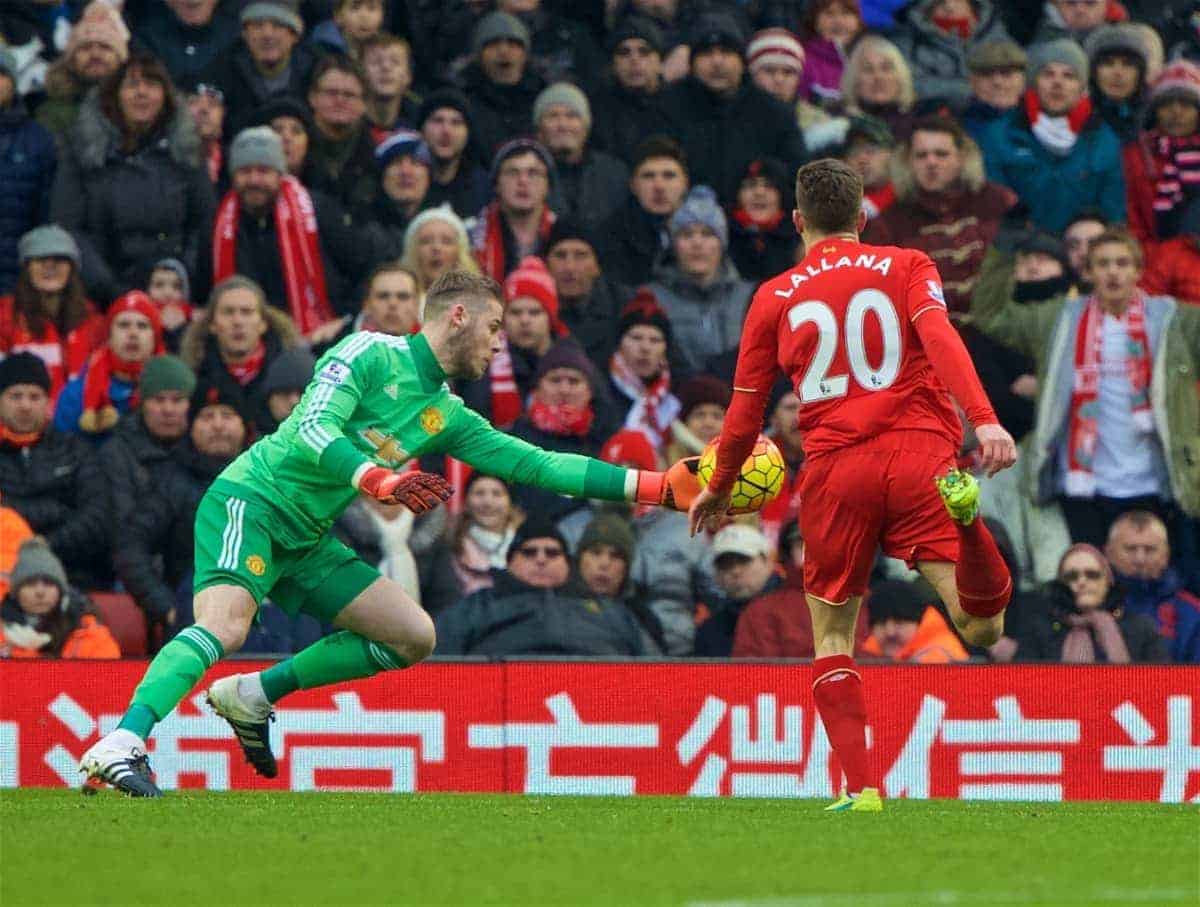 A lack of quality in the final third saw Liverpool fail to capitalise on their dominance in Sunday’s 1-0 defeat at home to Man United.

The scene was set for a positive performance from Liverpool.

Jurgen Klopp had summoned his side’s fighting spirit in his pre-match press conference, hailing the atmosphere of the north-west derby, and the Reds were entering this Anfield clash buoyed by a late equaliser from Joe Allen in Wednesday night’s 3-3 draw with Arsenal.

But, as the German found out over the course of 90 minutes against his old adversary, Louis van Gaal, his side’s inability in the attacking third remains their biggest flaw.

Setting his side up in a 4-3-3 formation, Klopp made just one change from the side that held Arsene Wenger’s Gunners.

This saw Lucas Leiva come in for Jordon Ibe, with the Brazilian playing a bullish role at the base of the midfield.

Lucas’ most unlikely of qualities, creating opportunities from deep, set the tone in the first half, with Liverpool utilising direct passing play to look to damage the United defence.

Joining Lucas in midfield were Emre Can and Jordan Henderson, supporting James Milner and Adam Lallana on the flanks.

Milner and Lallana interchanged with Roberto Firmino in between the lines, but in a side including six natural midfielders, the Reds were unable to truly test an impressive David de Gea in the United goal.

Liverpool had 19 shots to United’s seven, with 12 of these coming from outside the area—in short, Klopp needed a natural No. 9.

It wasn’t until Wayne Rooney’s powerful second-half strike that Klopp rolled the dice however, bringing on Christian Benteke for Kolo Toure, having introduced Jordon Ibe in place of Lallana five minutes earlier.

This saw Liverpool adopt an attacking 4-2-4 shape, with Benteke joining Firmino in attack and Milner and Ibe occupying the wings.

Lucas dropped into defence, and Liverpool desperately sought a leveller.

Lumping direct passes into the United penalty area, the Reds looked to replicate their heroics from Wednesday night, but having dominated their rivals with fluid attacking play throughout, this proved ineffective.

With only Benteke available, Klopp is without a suitable striker to suit his high-tempo attacking system, and this was clear in Sunday’s defeat.

So often the likes of Lallana, Milner, Henderson and Firmino created positive openings in the final third, but without anyone to send to ball beyond De Gea, this proved fruitless.

By switching his tactics in search of a winner, Klopp acknowledged his side’s need for an added presence in attack.

Unfortunately at this stage, it seems that doesn’t have one that he truly trusts.