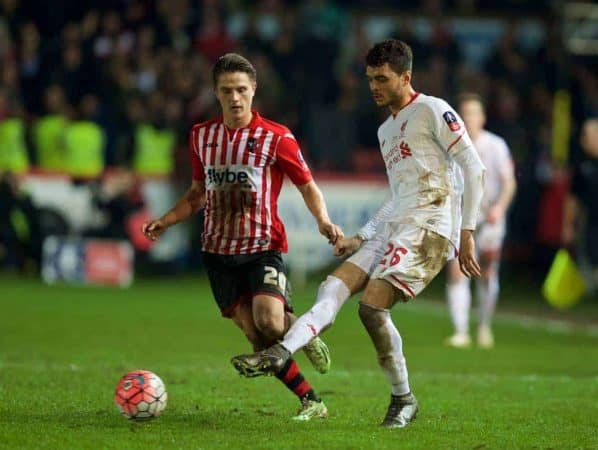 Liverpool’s FA Cup third round replay against Exeter City has been confirmed for next Wednesday, 20th January (8pm kick off).

The match will be played three days after Manchester United’s visit to Anfield (Sunday, 17 January) and three days before the lunchtime trip to Norwich City (Saturday, 23 January).

It means Jurgen Klopp‘s side have four games in 11 days, starting with the visit of Arsenal on Wednesday – a relentless schedule for the already depleted Reds’ squad.

It’s for that reason that Klopp has already hinted that he will play another experimental team in the replay against the League Two side, saying after Friday’s 2-2 draw: “The situation doesn’t change, we will play the same team.

“We have to see the young players, I can’t change it. We have to give intensity to different players.

“We have to do this and accept what happens in the FA Cup.”

Add in the second leg of the League Cup semi-final (Tuesday, 26 January) and Liverpool have five games in 14 days.

Should they beat Exeter in the replay, they’ll then have the FA Cup fourth round to contend on the final weekend of January. That would mean they’d played eight games inside the calendar month.

“The number of games is the biggest difference (from Germany),” Klopp told several national newspapers this weekend, claiming not to realise that League Cup semi-finals were over two legs and that FA Cup ties go to replays.

“When I came here, I didn’t know there were two (legs) in the semi-final of the Capital One Cup. I had people in Germany, saying after we beat Stoke, ‘yeah, you’re in the final again!’ Idiots!

“In Germany, when you tell people about the FA Cup – that if you draw you play again – they say ‘what?’. Here you have penalties and extra time, but only after the second game.”

Klopp’s admission here perhaps leaves you pondering why a member of staff familiar with English football wasn’t appointed to his staff to help him with these situations.