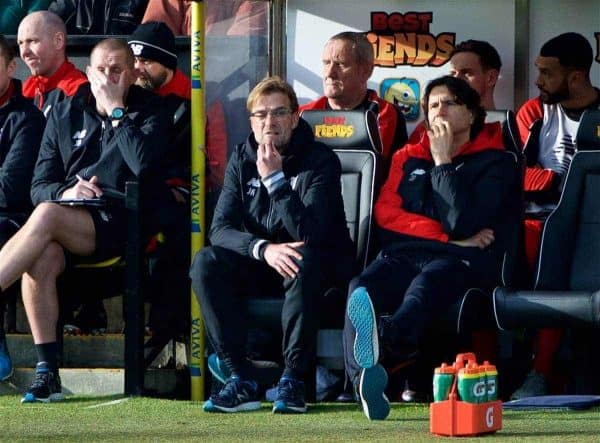 Jurgen Klopp: Our defending on set pieces is rubbish!

Liverpool went from 3-1 down to 4-3, conceded in stoppage time for 4-4, then won it 5-4 in dramatic scenes against Norwich City.

All four of Norwich‘s goals were scored from set pieces, Liverpool’s Achilles heel throughout the season – an issue that is not being solved.

Speaking after the match, Jurgen Klopp said: “[It was an] unbelievable game. It was not easy today. I think we had a lot of problems in the game. I don’t know what it was but it wasn’t enough at the start of the game against a team searching for confidence.

“Second half we came back with brilliant goals and at the end when I saw five minutes (stoppage-time) I thought…I couldn’t understand why.”

Speaking specifically about the set pieces, Klopp said his side’s defending from them was rubbish:

“Four goals from set-plays, that must be a new record, I think you have to make a new list for British football. I think it is crazy what we are doing.

“It’s easy to play against us, you only have to throw the ball over the line off a set play. If they don’t do it, we will do it [for you].

“It’s rubbish what we are doing.”

Also speaking to BT Sport post-match, match winner Adam Lallana said: “A strange afternoon but we’re just delighted to get the three points in the end. When they scored in the 92nd or 93rd minute, you think it’s going to be one of them days.

“But Benteke nodded it down, next thing you know it’s in the back of the net. It’s three points which is massive for us after a few disappointing results.”

James Milner added: “(The game) was ridiculous at times. Going up and then it’s disappointing coming in at half-time, we weren’t at the races. But we showed character to come back especially after conceding the goal early in the second half.

“It’s disappointing to concede from another set-piece. It would have been easy to roll over but we went straight back on the front foot. A great finish from the lads.”