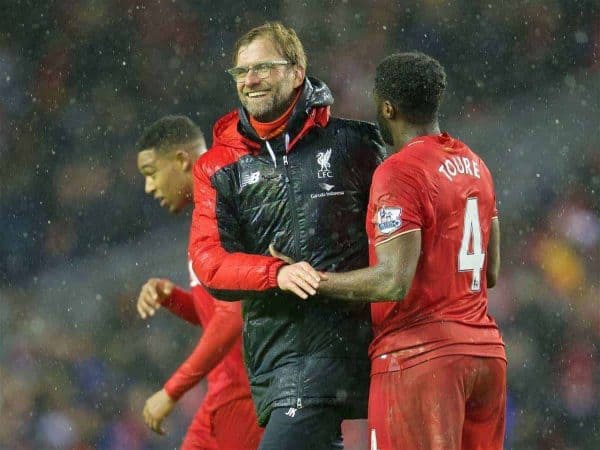 Liverpool defender Kolo Toure believes a recent improvement in the mindset within the squad means they now refuse to accept lost causes.

Joe Allen’s 90th-minute equaliser in the 3-3 draw at home to Premier League leaders Arsenal salvaged something which was more valuable than a point – and that was belief.

A week previously they stoutly defended a 1-0 lead in the first leg of their Capital One Cup semi-final at Stoke and even the scratch side put out against Exeter in the FA Cup displayed character as they twice came from behind to secure a replay.

Early in Jurgen Klopp‘s reign the German had complained about the players mentality not being able to respond to late setbacks.

“We concede one goal and it felt like the end of the world,” he said after Southampton‘s 86th-minute equaliser in October, while “eighty-two minutes – game over” was his response when Crystal Palace scored a winner eight minutes from time a fortnight later.

Perhaps the adversity of an extended injury list has galvanised the remaining fit players or maybe the penny has finally dropped in terms of the extent of the commitment Klopp demands for his players but the result against Arsenal showed they no longer accept the inevitable.

“There has been a big improvement recently [in our mental strength] and that’s very important when you’re at a big club. You can’t ever give up,” said Toure, whose whole-hearted effort is appreciated by fans.

“When you refuse to lose games, you often find yourself winning them.

“It’s always important that if you don’t win, you don’t lose.

“We showed character and resilience and we didn’t give up until the end of the game.

“It’s very important that we keep things going at home. We played against a good team in Arsenal who are top of the league, and it’s good that we haven’t lost to them.”

This season Liverpool’s record against their traditional rivals – Arsenal, Manchester City, Chelsea and Manchester United – is much improved with just one defeat coming at Old Trafford in September, signalling the beginning of the end of Brendan Rodgers’ time in charge.

Since Klopp took over they have won 3-1 and 4-1 at Chelsea and City respectively and they will look to maintain that sort of form at home to Manchester United on Sunday.

Their three goals against Arsenal, the first time they have scored more than two in the league since the November win at the Etihad, was perfect timing ahead of the visit of a United defence which has been pretty frugal up to their own 3-3 draw at Newcastle on Tuesday.

Toure is hoping the weekend’s match is not so frenetic but admits they have to tighten up at the back.

“It was a crazy game, a crazy night. It wasn’t a good night for a defender though – conceding three goals,” added the 34-year-old.

“In the next game coming up against United, we need to show more power defensively.

“It’s going to be another big game for us. These are the kind of games you can win if you are strong mentally.

“If we can be strong, and the fans push us like they did against Arsenal, that can give us something extra.

“It’s great to see the fans behind us. You know that in a lot of games it’s only decided towards the end: players get tired and when you have that push from your fans you can feel the difference.

“That’s what you need. We just need to keep putting in the same level of effort and the results will come.”