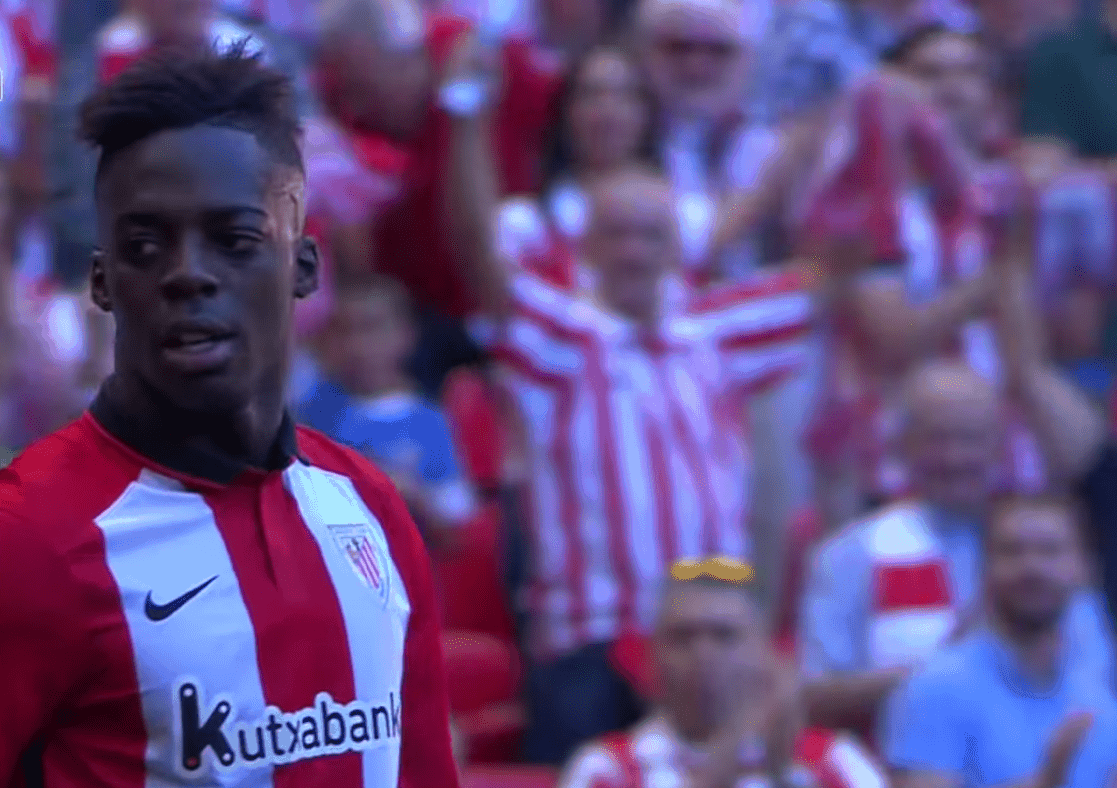 The rumoured search for a new forward continues for Jurgen Klopp, with Athletic Bilbao’s versatile Spaniard Inaki Williams the latest to be linked.

With Southampton‘s Shane Long also rumoured to be on Liverpool’s radar this January, injuries to a host of forwards in Klopp’s squad this season have led to the Reds “monitoring” Williams.

That is according to Ed Aarons of the Guardian, who reveals that Williams could be available for around £15 million this transfer window.

Williams operates as a winger for Athletic, but has been utilised as a centre-forward for Spain’s Under-21s side.

Aarons claims that “Liverpool have scouted him in recent weeks,” suggesting that Arsenal, Tottenham Hotspur, Atletico Madrid and Real Madrid are all interested in securing his signature.

Athletic are said to be pushing for Williams to sign a new contract, including a release clause of around £76 million.

But with his current contract including a release clause of close to £15 million, the Reds could take advantage of his availability this January.

Williams is typically fielded as a right winger for his club side, and has scored 10 goals and assisted on three in 22 appearances in all competitions.

This included a sensational volley in Athletic’s 2-1 win at home to Espanyol in November, with the Bilbao-born talent flicking the ball over the Espanyol defence on the turn before firing beyond Pau Lopez with a powerful strike.

So far under Klopp, Liverpool’s right winger has been regularly occupied by Adam Lallana and Jordon Ibe, but with Williams’ versatility, he would be a useful addition.

At only 21 years old, Williams can be considered a similar talent to the currently injured Divock Origi.

Origi joined Daniel Sturridge and Danny Ings on the treatment table at the end of 2015, leaving just Christian Benteke and Roberto Firmino as Klopp’s regular No. 9s.

Reported interest in Williams could spell trouble for Benteke, who has so far failed to adapt to Klopp’s attacking demands as a starting centre-forward.

An incredibly pacy forward option suited to a counter-attacking style of play, Williams has shone as an integral part of the Athletic attack since his debut in 2014/15.

According to the Mail‘s Kieran Gill, who corroborates Aarons’ reports, the Spaniard broke the record for “the fastest player in La Liga.”

What separates Williams from other young attacking talents is his infectious work ethic, and at 6’1″, he would add another welcome physical presence to Klopp’s forward line.

At just £15 million, Williams could prove a bargain signing.