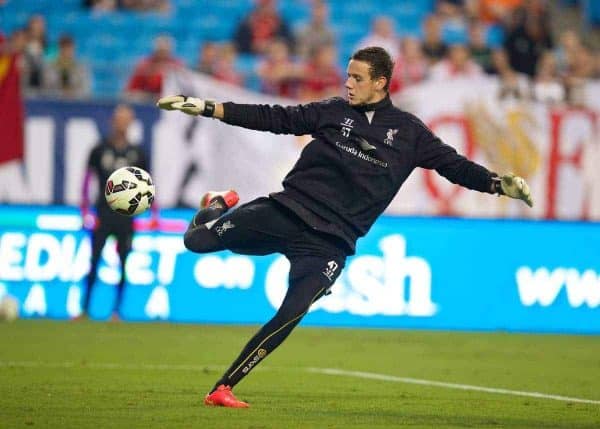 The next player in line for a loan recall to Liverpool this January is goalkeeper Danny Ward, who has impressed this season with Aberdeen.

Ward has been one of the stars of Aberdeen’s fight for the Scottish Premier League title so far this campaign, but that is set to come to an end as Jurgen Klopp has decided to recall the goalkeeper.

According to BBC Sport the 22-year-old has played his last game for the Dons, and will now join up with Klopp’s squad this week.

Having proved himself as a strong, commanding presence between the sticks at Aberdeen, Ward will now be hopeful of game time on Merseyside.

This move raises question marks over the future of backup goalkeeper Adam Bogdan, with the Hungarian having failed to impress Jurgen Klopp with poor performances against both Watford and Exeter City.

At St. James Park on Friday night, Bogdan let a goal in direct from an Exeter corner, allowing himself to be easily bullied on the goal line.

Ward’s return could also see Simon Mignolet given more competition for the No. 1 shirt, and speaking at the end of December the Welshman signalled his intention to become Liverpool’s first-choice stopper.

“It is definitely an ambition of mine to be Liverpool’s first choice,” he said.

“I have a self-belief where I think I can play at the highest level. Ideally that’s at Liverpool, that would be fantastic.

“They gave me a new long-term contract before I came up. I took it to mean they think I have got a chance.

Whether he will be given the opportunity to do so immediately remains to be seen, but Ward is unlikely to return to merely play for the U21s.

With a busy fixture list continuing throughout January, Ward can expect to come into Klopp’s first-team setup.

As with fellow returning loanees Ryan Kent, Sheyi Ojo and Tiago Ilori, Ward will be hoping to make his mark as Klopp looks to build his side for the future.