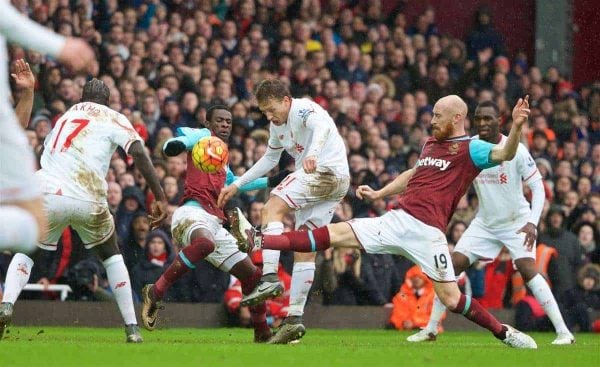 It might be a New Year, but 2016 began with a serving of ‘same old Liverpool’. Jurgen Klopp’s men looked inferior to their West Ham counterparts in every way on Saturday afternoon.

With his players lacking in drive, creativity and ability Klopp described himself as being “angry” at full time; the anger will undoubtedly have been compounded by the fact that not only were Liverpool outplayed they were also outfought.

It was only 48 hours earlier TV cameras captured Klopp tearing out Adam Lallana for not being strong enough when competing for a ball; the Englishman paid with his starting place versus West Ham but the 11 players who Klopp picked for the fixture will no doubt feel his wrath in training this week.

Only Emre Can may come out with a less severe rollicking; he gave a good all round display and often was found covering for an absent Lucas Levia; the epitome of an anti-captain.

For all of Liverpool’s possession, 66%, there was no final product. Can clipped the woodwork in the first half, the only real threat to Adrian s goal all afternoon.

The much maligned Christian Benteke one again failed to capitalise on three clear cut chances; the Belgian has done little to change the opinion that if all Liverpool’s strikers are fit he is clearly 4th choice.

At a cost of £32.5m there should be a few in the boardroom quite rightly sweating on their futures as it becomes evident that last summer’s outlay was a clear overpayment for a striker not suited to the Liverpool way.

Both halves were ones to forget for Liverpool; firstly, Albert Moreno’s overreaction to a tackle led directly to West Ham’s opener, although there was a clear foul on Moreno his lack of drive or willingness to get to his feet and attempt to track back culminated with a powerful header at the far post by Antonio.

Television replays show Moreno react to the foul as if he’d just had his ankle shot out by a sniper, the fact he got to his feet and ran back after the goal had been conceded left a number of supporters bemused and only serves to strengthen Klopp’s analysis that his team needs more “fight and desire”.

Andy Carroll powered West Ham to a 2-0 lead on 54 minutes as he showed all the drive and determination to win the ball in the box that Benteke can only currently dream of; a proverbial kick in the nuts to the traveling Kop who once again witnessed everything that is wrong with this current squad assembled by Brendan Rodgers which lacks fight or, at times, talent.

Liverpool did create one further golden chance to salvage some pride but Joe Allen inexplicably managed to steer an unchallenged header wide from inside the six-yard box; Allen another who’s time at Anfield looks to be almost over.

All in all, a day to forget for the Reds, acceptable if this hadn’t followed on so soon from Newcastle and Watford away, further days to be forgotten.

On appointment, Klopp said he was relishing the challenge at Liverpool; he couldn’t have expected such a challenge so soon as there are credible arguments for up to 8 players to be shipped out whilst the only real creative outlet, Phillipe Coutinho, looks every inch a player who has had his head turned by stories of Barcelona.

If Coutinho was to leave Liverpool now the only real position he could undertake at Barcelona would be on the bench, he is woefully short of the form required to play with the World Club Champions.

Klopp has said time and time again he is prepared to work with the players at his disposal but the blunt truth is that many are just simply not good enough; he is a manager not a magician.

Liverpool will be lucky to capture the type of player required during the January window as they do not look a viable option especially if the players they target are enjoying a fruitful season with their current employers.

Liverpool fans will not want to hear it but it could be early summer before Klopp is able to root out the deadwood left to him and start to build the squad required to make Liverpool a consistent fighting force again.