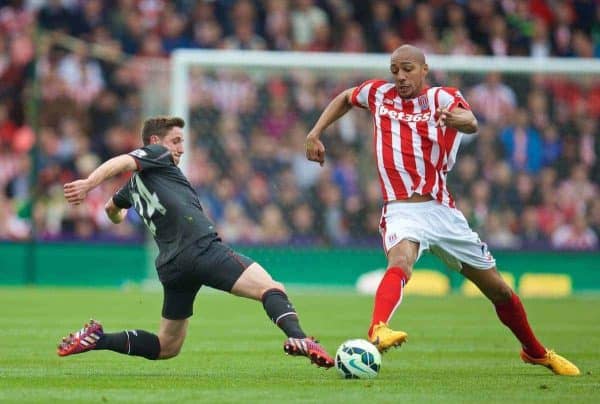 Stoke host Liverpool on Tuesday in the first leg of their Capital One Cup semi-final. Here, Press Association Sport look at some talking points ahead of the match.

1 Liverpool are favourites for the tie – but is that warranted?

The Reds scraped a 1-0 win against Stoke on the opening weekend of the season under Brendan Rodgers but that was only their third win in nine attempts at the Britannia Stadium.

While it may not quite be the daunting place it was under Tony Pulis, the Potters can still turn it on for the big names with Chelsea (twice), Manchester City and Manchester United all losing there this season.

2 Consistency is a problem for both teams, so who is the most likely to bounce back from a disappointing defeat at the weekend?

After failing to win their first six matches this season, Stoke have recorded 11 victories in 17 attempts since and have not gone more than two games without a win.

Liverpool looked to have momentum from late October to early December with seven wins in eight, but since hammering Southampton 6-1 in the quarter-final they have won just two of five and those victories were not particularly convincing.

3 Why are they so inconsistent?

In one word: goals – or lack of them. Liverpool’s 22 from 20 league matches is the lowest total in their history and with their only fit striker Christian Benteke still not firing on all cylinders it has been a struggle.

Stoke have only 21 league goals themselves but four of those came at Everton last week.

4 What are the chances of Liverpool keeping a clean sheet?

Slim. Manager Jurgen Klopp has admitted they cannot defend crosses and West Brom, Watford and West Ham have all demonstrated as much in the last couple of weeks.

Regular centre-back Martin Skrtel is out injured and Dejan Lovren and Mamadou Sakho have not looked comfortable together.

5 Where can Stoke win the game?

The Potters profited against City and United with a flexible 4-2-3-1 formation which gets all their creative players – Xherdan Shaqiri, Bojan Krkic, Ibrahim Afellay and Marko Arnautovic – onto the pitch at the same time.

Shaqiri’s threat out wide on the right could be a real factor with Arnautovic, in particular, benefiting from cutting inside from the left flank.