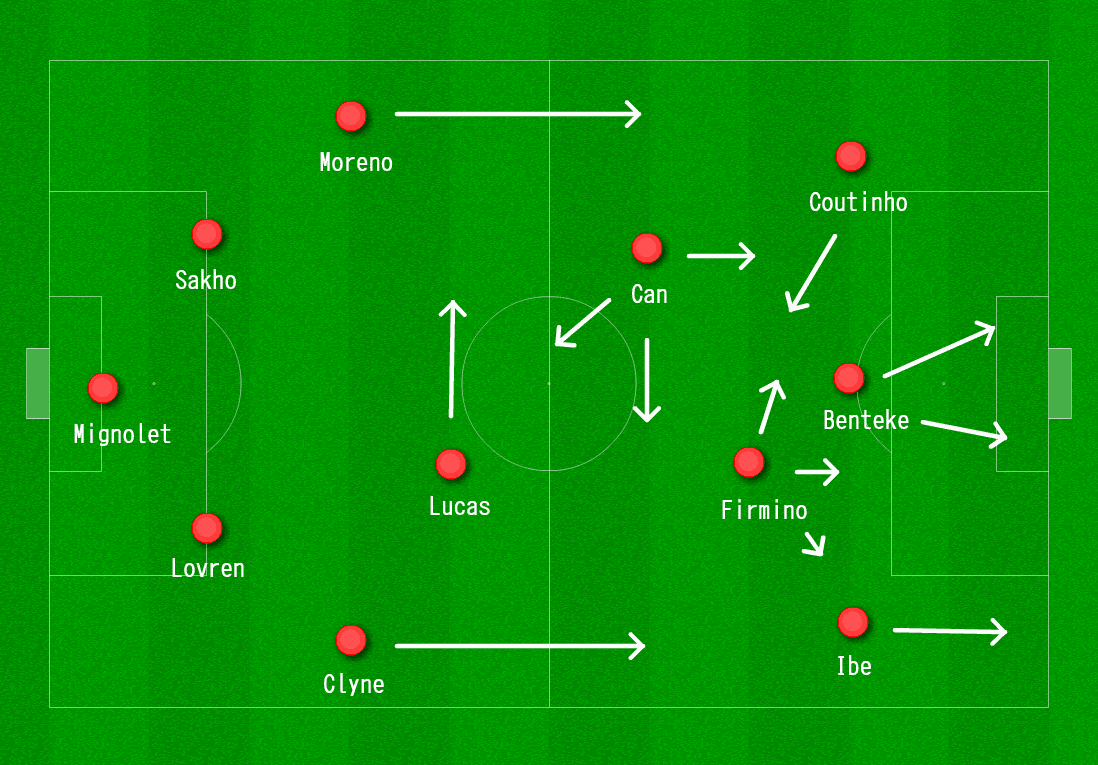 A lack of invention from Liverpool in the final third played into West Ham United’s hands in the Reds’ 2-0 defeat at Upton Park on Saturday afternoon. Goals from Michail Antonio and Andy Carroll secured the three points for the Hammers, but a limp attacking display from Liverpool ensured that victory was a mere formality for Slaven Bilic’s side.

Bilic served up a surprise by lining his side up in a robust 4-4-2 at the Boleyn Ground, deploying Enner Valencia alongside Carroll in attack.

This saw Manuel Lanzini and Antonio work to quell the Liverpool charge in near wing-back positions off the ball, with Valencia assuming Lanzini’s duties on the on-loan man’s withdrawal through injury.

With Klopp fielding a 4-2-3-1 once again on Saturday, West Ham were able to dominate easily.

Making two changes to his lineup from the 1-0 win away to Sunderland on Wednesday evening, Klopp brought in Lucas Leiva for the injured Jordan Henderson, and dropped Adam Lallana to the bench, with Jordon Ibe taking his place in attack.

Ibe took up a right-sided role alongside Roberto Firmino as No. 10 and Philippe Coutinho once again occupying the left wing.

This saw Klopp look to profit from the strong partnership of Ibe and Nathaniel Clyne, who bombed forward with regularity from right-back.

But with much of the emphasis in the buildup focussing on how Liverpool would service Christian Benteke as Klopp’s lone striker, the Belgian’s lack of invention in attack undermined this once again.

Aided by support from Antonio in particular, West Ham‘s defensive ranks were solid, with James Collins bullying Benteke from the first whistle.

Collins and his centre-back partner, Angelo Ogbonna, won 10 aerial duels on Saturday afternoon, compared to Benteke’s two, and this pointed to a need for the striker to change his approach.

Telling reporters in December that “I think I have to run more and I have to be there for my team-mates,” Benteke acknowledged this in his overall game.

But too often at the Boleyn Ground, he once again cut a static figure leading the line.

With the aerial route blocked by the imperious Collins, Benteke needed to heed his own advice and run the channels.

Unfortunately, bar one intelligent move to latch onto a Brad Smith pass in the closing stages, Benteke failed to do so.

The criticism cannot fall solely at Benteke’s feet, with Liverpool’s lack of fight making defeat a foregone conclusion, but the 25-year-old showcased a shameful lack of endeavour once again.