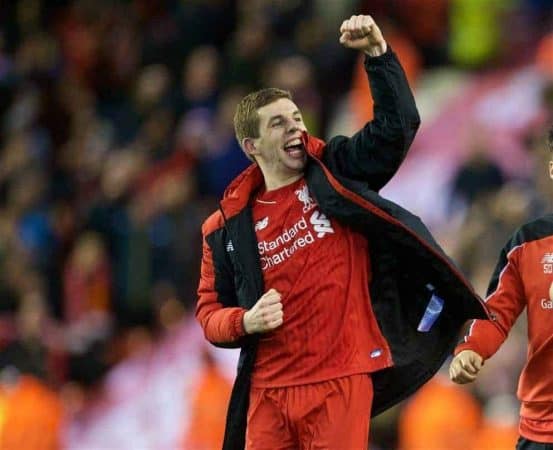 With Jon Flanagan omitted from Jurgen Klopp‘s revised Europa League squad, the German has explained the reasoning behind his decision.

Preparing his side for a two-legged round-of-32 clash against FC Augsburg in the Europa League this month, Klopp named his 25-man squad for the knockout stages of Europe’s second-tier competition.

This saw Adam Bogdan drop out, with Danny Ward preferred as second-choice goalkeeper, while Steven Caulker and Joao Carlos Teixeira came in for injured duo Joe Gomez and Danny Ings.

But after making his long-awaited comeback from injury, Flanagan’s omission came as a surprise to supporters.

Speaking to reporters on Friday afternoon, however, Klopp revealed why he had left the 23-year-old out of his selection, insisting that he had a role to play for the club this season.

“It’s really early after his injury so we have to be really careful.

“Flanno needs two or three days recovery, not because what he thinks he needs but because of the seriousness of the injury.

“I have to make decisions, it’s not my job to disappoint players.”

The decision to include January loan signing Caulker instead of Flanagan raised question marks, with the Queens Park Rangers centre-back one of five included in Klopp’s squad.

But explaining his decision, the German revealed that Flanagan would be utilised throughout Liverpool’s busy schedule, while Caulker was drafted to cover for Martin Skrtel, who has suffered a setback in his recovery from a hamstring injury.

“The European league games, for sure in this moment, it’s not [for Flanagan],” he continued.

“At this moment we have two more games, always in between.

“Martin Skrtel was re-injured, he needs another two or three weeks, we have to see.

“The centre-half situation [is difficult].

“In the end you cannot believe how difficult it is to make a European squad.

“In this moment with Flanno’s history in this year, the situation was like this.”

While Flanagan’s absence from the Europa League squad provoked the ire of supporters awaiting more appearances from the local-born defender, Klopp’s decision is rational.

Between now and May, Flanagan can expect plenty of game time, as the fixtures mount up for the Reds.