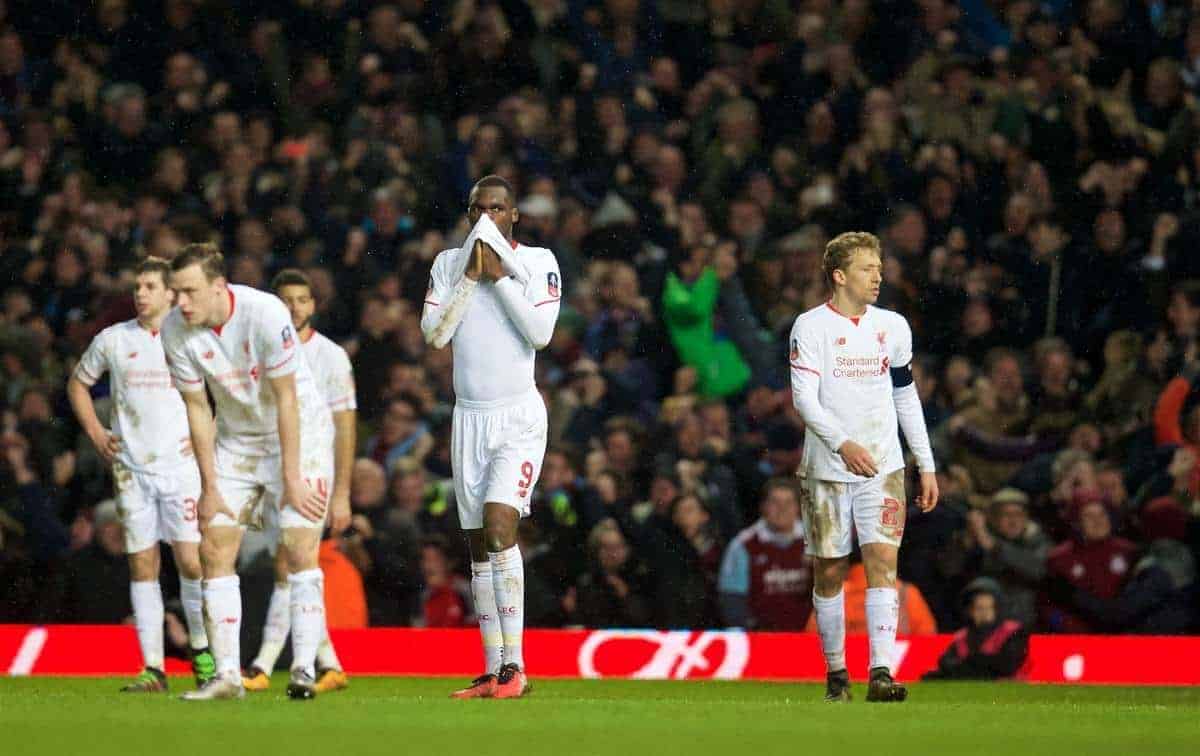 Ben Twelves witnessed Jurgen Klopp’s Liverpool exiting the FA Cup with a last-gasp loss to the Hammers at Upton Park, but despite the result it was a night of positives for the Reds. Angelo Ogbonna’s 120st minute header knocked Klopp’s courageous Reds out of the FA Cup in the harshest of eliminations.

The Italian won it with the last kick of the game in the additional 30 minutes, after Philippe Coutinho’s clever second half free-kick drew Klopp’s men level having fallen behind to Michail Antonio’s volleyed finish in the first half.

It was the cruelest of endings for Liverpool on a freezing cold night in London after a monumental effort and a brave performance from a young and makeshift side.

Here are the talking points from the gutting defeat.

Sturridge and Coutinho Returns a Huge Boost for Klopp

On a night of numerous positives bar the result, the biggest was undoubtedly the return to action of Philippe Coutinho and Daniel Sturridge.

The key pair showed their class instantly on return, with Coutinho’s magic sparking with a fantastic free-kick to equalise before he was rightly withdrawn, while Sturridge was back with a bang, missing only a goal from a brilliant first appearance since early December.

Alongside Divock Origi, who didn’t enjoy the impact of his seniors, the pair immediately showed the extra dimension they bring to Liverpool’s attack, with their creativity, skill and goal threat providing a cutting edge lacking from the Reds’ final third play.

The duo’s comebacks really whetted the appetites of Kopites, and keeping them fit is the next step with them capable of firing the Reds to a reasonably positive campaign yet.

Lucas a Colossus at Centre-Back

Slotting in defence with Klopp’s natural defensive options limited, Lucas stepped up the occasion with a colossal display.

The experienced Brazilian competed superbly against Enner Valencia and Andy Carroll, despite his physical disadvantages, and he won countless headers, made numerous brave blocks and tackles in a physical encounter with a wholehearted display.

Couldn't understand Klopp using Lucas at CB in the last few months but looks like he was right! #Colossus

Clearing lines, taking no risks alongside the impressive Tiago Ilori, Lucas’ know-how was vital in a relatively inexperienced back four as he lead by example as the captain – organising well and audibly with his voice heard at times from the away end as he barked orders.

Despite not being in a natural position it was an excellent performance from the stand-in skipper, and with his midfield form poor as his legs age, playing at centre-back could give him a new lease of life. On a big night at Upton Park, the young midfield duo impressed hugely with courageous displays in the heart of the midfield battle.

Stewart was the leading light, with the 22-year-old showing his slightly older years with a mature performance in which he impressed hugely with his awareness of developing danger, break up play and use of the ball thereafter.

Huge effort from a fledgling Liverpool defence and midfield. Kevin Stewart can't be far off a PL start after those two performances

The ex-Swindon loanee looked like a seasoned professional alongside Chirivella, who though didn’t stand out quite as much as his senior, showed his game intelligence and technical ability, while also not shying away from a physical and exhausting end-to-end tie.

Having carried a big responsibility as the Reds’ two man centre, the duo were visibly shattered come the late stages; Chirivella riddled with cramp for his efforts prompting his withdrawal, while Stewart somehow lasted the full 120 minutes after a monumental shift.

Klopp: "Pedro [Chirivella] is a big, big talent, we are all looking forward to watching him tonight. We have no doubts about his quality."

The Belgian had the chance to make himself a hero after a tough start to life at Anfield, but his countless missed chances once again made him the villain.

Typically at odds with teammates, failing to provide to an attacking threat other than at set-pieces, it was a night of the same old – despite an upturn when partnered with Sturridge – that was made even worse with his inability to fire the Reds to round five.

Had more than enough chances to win. And that's just Benteke…

Benteke should have done better with a couple of efforts at the back-post from corners and he blazed a volley wide when well-positioned in the box, before squandering a huge chance when one-on-one in extra-time, firing straight at Darren Randolph – a miss that ultimately cost the Reds progression.

The £32.5million man has been nothing but a problem since arriving, but he’s now proving an even more costly issue as he closes on 700 minutes without a goal.

Having proved their capabilities in the handy exercise the FA Cup has provided, the time is now to blood the youngsters on the Premier League stage.

Stewart’s dominant performances in his cup outings should see him trusted with a run in the already-ended league campaign as he puts up an almighty fight for his Reds future, while preparing Chirivella for the big stage would also be a welcome move.

Ilori, Smith, Chirivella, Stewart, Brannagan and Joao put in some good performances when called on. Hopefully get chances in the PL & EL.

After another composed display at the heart of the defence and Liverpool’s defensive injuries piling up, handing Ilori league minutes would be a wise step, as would giving Brad Smith a run at left-back and factoring Joao Carlos Teixeira into Liverpool’s first choice attacking set-up.

There is nothing to lose and everything to gain by giving the youngsters valuable competitive league experience, and Klopp should take full advantage of the chance after those trusted proved their worth.