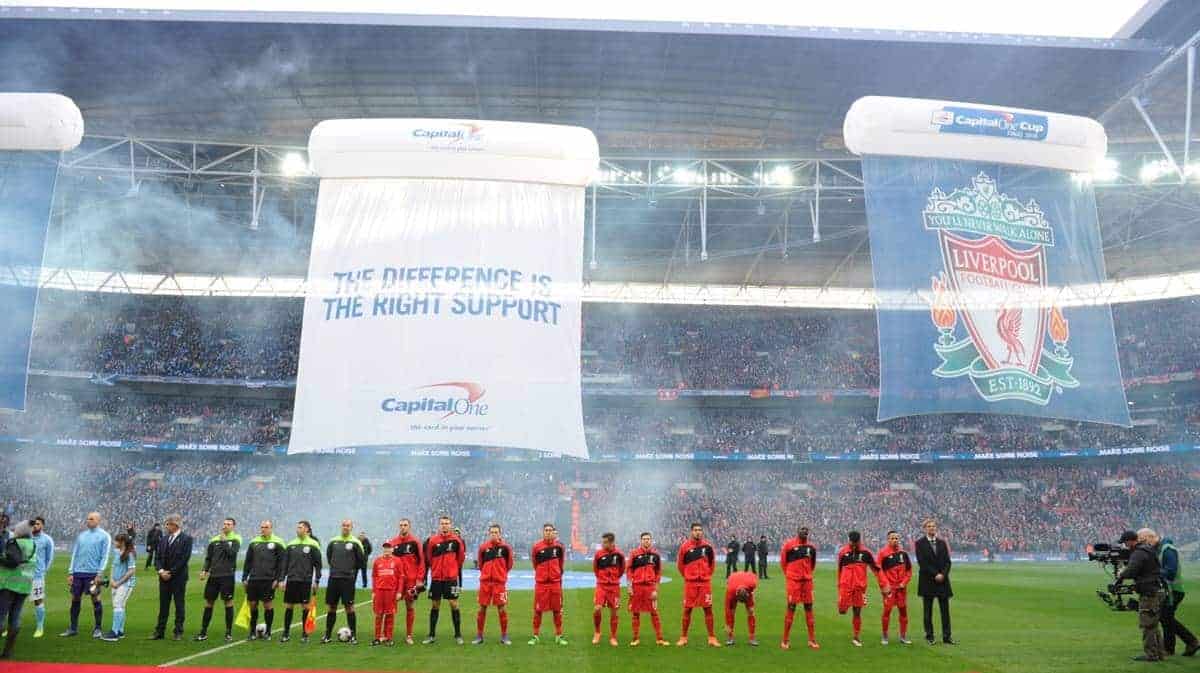 Following Liverpool’s heartbreaking penalty shootout defeat to Man City in the League Cup Final, we assess the performance of each Reds player.

The Belgian made several impressive saves on the day, including one fabulous stop to deny Sergio Aguero, but his dreadful mistake gifted City the lead.

It was yet another high-profile error from Mignolet, and one that again showed that he is just not good enough to be Liverpool’s first-choice goalkeeper.

Clyne was his usual solid self, providing plenty of energy throughout the contest and keeping the dangerous Raheem Sterling quiet.

The 24-year-old’s final ball was a little erratic, however, and there were times when more attacking thrust was needed. Slightly disappointing.

Once again used in a centre-back role by Jurgen Klopp, Lucas produced a fantastic performance on his first ever appearance at Wembley.

He made tackle after tackle, read the game brilliantly and also used the ball intelligently from start to finish.

Missed his penalty, but man of the match overall. A devastated Sakho saw his game cut short, following a nasty clash of heads with Emre Can. He was reliable during his time on the pitch, barring one slip that let Aguero in.

The Spaniard was generally good, providing constant running down the left flank and defending far better than we have seen at times this season.

His cross was once again very inconsistent, though, and he was lucky not to concede a penalty after a careless trip on Aguero.

In many ways, Can’s display went very much under the radar, but he was one of the Reds’ standout players against Manuel Pellegrini’s men.

The 22-year-old is maturing as a footballer, and his dynamism in the middle of the park was more than a match for Yaya Toure and Fernando. The Liverpool skipper was denied the chance of lifting the trophy for his side, and it was a mixed afternoon for him.

His endless running and hounding of the City players was as effective as any Reds player, but there were times when he lacked creativity in key areas.

Still doesn’t look 100 per cent fit. Questions over why the captain doesn’t take a penalty in a final.

A little like Henderson, there was much to admire about Milner’s work ethic and industry, but he lacked quality when it really mattered.

The England international fluffed a great chance to equalise in the second-half, and he just never looked like finding a moment of inspiration in the final third.

The Brazilian was Liverpool’s most threatening attacking player, and there were some typical moments of creative brilliance from him.

The 23-year-old scored the Reds’ equaliser late in the day, burying his chance ruthlessly. His penalty was awful though, which was disappointing for a player of such brilliance.

A poor performance from Firmino, who had arguably been Liverpool’s best player in 2016 prior to the match.

The former Hoffenheim man lost possession continually, and just could not link-up with others and stamp his authority at any point. Caught offside an infuriating number of times. A little like Firmino, Sturridge struggled to hit top gear but did look a threat at times when receiving the ball deeper.

The 26-year-old was guilty of trying to be too clever on the ball on occasion, and was robbed of possession a few times because of it.

Toure had to cope with one of the world’s finest strikers in Aguero, but he did well on the whole. He didn’t make any errors, and his experience shone through.

The Englishman couldn’t really get into the game, but did work his socks off. Another who missed a penalty.

The youngster impressed, showing good pace and strength, and is now firmly ahead of Christian Benteke as Liverpool’s second-choice striker.

Klopp’s decision to start Lucas was fully vindicated, with the Brazilian the Reds’ star man, and it was impossible to argue with the rest of his selections too.

He will be heartbroken to have lost at Wembley in a final once again. Did nothing wrong, and his changes – especially changing to a diamond midfield after bringing on Origi, worked very well.