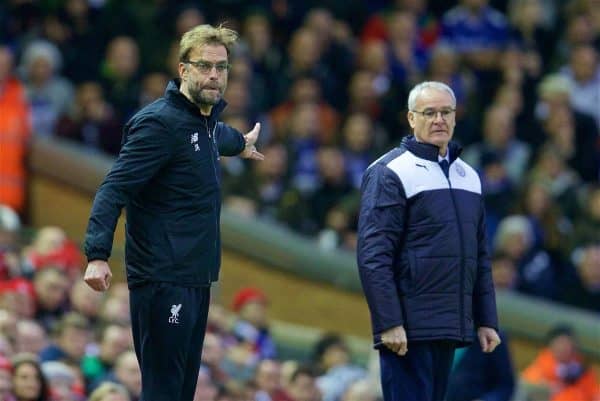 “They have a plan but we know about it” – Leicester City vs. Liverpool Preview

Liverpool return to Premier League action on Tuesday night when they take on league leaders Leicester City at the King Power Stadium.

After a 10-day break from league exploits, the Reds take on Claudio Ranieri’s table-toppers as Liverpool look to battle their way back into top four contention.

The spirited 5-4 win over Norwich proved Jurgen Klopp’s resilient side will scrap until the very end for a Champions League place, and after starting the fight-back in exhausting but positive fashion at Carrow Road, feint hope of a top four finish is still alive.

Klopp’s men need to build consistency with positive results starting in the toughest of tests on Tuesday night to keep the hunt alive, and another show of the improved never-say-die attitude will be required in order to take three huge points back to Merseyside.

The Reds at Leicester

Trips to Leicestershire have thrown up mixed fortunes for Liverpool, who have won just 14 of 49 meetings against the Foxes away from home.

However, the Reds are unbeaten in their last three trips and will be looking to record successive wins at the King Power Stadium after the 3-1 success last season on a night Leicester sat bottom of the table.

Goals from Adam Lallana, Steven Gerrard and Jordan Henderson handed the Reds three points on that December 2014 visit, impressively coming from behind after Simon Mignolet’s unfortunate own-goal put the home side ahead.

The reverse fixture this season saw the Reds run out 1-0 winners on Boxing Day at Anfield courtesy of Christian Benteke’s finish, as the Reds became the first side to stop the Foxes scoring in a league game this season.

Klopp’s side will hope to replicate that result on Tuesday.

Leicester’s remarkable campaign continues, as they sit three points clear at the top as the business end of the season approaches.

The Foxes are unbeaten in the league since they lost to the Reds on Boxing Day, though have drawn three of their last five games.

Ranieri’s men have endured indifferent home form winning only two of their last five, but they have lost only once at the King Power Stadium – to Arsenal in September.

With a tough run upcoming against the Reds, Man City and Arsenal, Ranieri will be looking to start a potential title challenge defining run in the best possible fashion.

The Reds continue to struggle for consistency, winning and losing twice and drawing one of their last five league games, as well as a defeat and draw in their last two cup matches.

But Klopp will be looking for his side to start establishing momentum with a second consecutive league victory against Ranieri’s title chasers.

A vital victory for Klopp’s side is priced at 6/4, with three points for Leicester valued at 9/5 and a share of the spoils offered at 23/10.

Ranieri has a strong and fresh squad to select from for Tuesday’s meeting having had the weekend off with no FA Cup action.

Only Jeffrey Schlupp – who is struggling with a hamstring issue – and midfielder Matt James are injury absentees, while the game is also set to come too early for new signing Daniel Amartey to feature.

However, the Leicester boss confirmed in his pre-match press conference that Richie De Laet and Shinji Okazaki are both fit and ready to play.

Ranieri could stick with the side that breezed past Stoke 3-0 last time out, though Leonardo Ulloa, who came on to score the third in that win, will be hopeful of a starting berth.

Deadly duo Riyad Mahrez and Jamie Vardy are fit to lead the Foxes, and the Reds will have to contain their creativity and pace like at Anfield with a much tighter defensive unit needed if they are to return home with the goods.

Klopp spoke of the top four fight and praised Leicester in his pre-match press conference:

“Top four should always be a target, but only our performances will have an influence on that situation.

“People talk about Mahrez and Vardy but the whole team is concentrated and focussed. What they are doing is great.

“It’s counter attacking football at its best. They have a plan but we know about it.”

Ahead of Liverpool’s visit, Ranieri said:

“Klopp believes in his style of football and he’s learning the Premier League quickly.

“In our last game, Liverpool played a very good match and scored with [Christian] Benteke. We tried to equalise but they defended very well.

“Now we’re at home and our fans will push us. I respect the Liverpool team but we are ready to fight.”

Bizarrely, the match hasn’t been chosen for live broadcast in the UK, but will be available to watch around the globe on the usual channels, such as SuperSport, beIN Sports Arabia and Canal+ Sport.