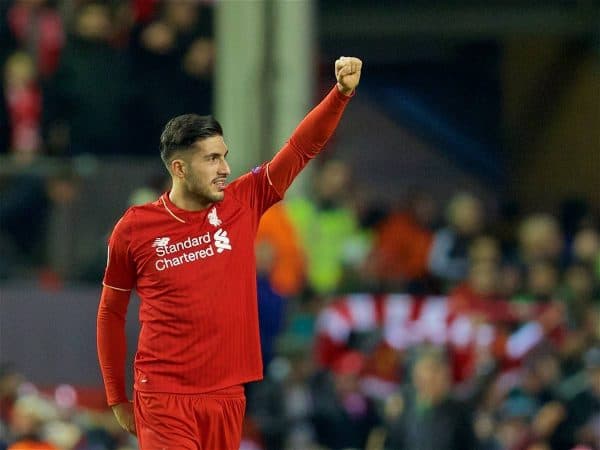 Liverpool midfielder Emre Can has played down the apparent elbow from Marouane Fellaini which could get the Manchester United midfielder banned for next week's Europa League second leg.

Television cameras picked up the Belgium international seemingly swinging a forearm into his German opponent's neck in the final moments of the Reds' 2-0 first-leg victory at Anfield.

The incident was missed by card-happy Spanish referee Carlos Velasco Carballo, whose six bookings in the game took his tally to 80 yellow cards and six reds in his 13 European matches, but Fellaini could yet be punished retrospectively by UEFA.

"It was just a small fight. It was okay. It was not a boxing ring punch," said Can.

"Fellaini is a fair sportsman. He touched my throat with his elbow but it is okay."

Fellaini deserves a ban for this elbow on Emre Can.. pic.twitter.com/dNWCpo6C5M

Liverpool's two-goal advantage did not accurately reflect the match itself. Had it not been for goalkeeper David De Gea's performance, United could easily have been 4-0 down at half-time and he made more saves after the break to give his side a glimmer of hope for Old Trafford.

Play was dominated by Liverpool, apart from a 15-minute spell just after half-time when the visitors changed their formation with a switch to a back three in order to enable them to establish a foothold in midfield.

"De Gea is a very good goalkeeper but we created chances, played well and scored two goals," added Can. "It was incredible, a very good score for the second leg and we have to keep going like that.

"The team played very well and the second half was sometimes not what we wanted to do as we didn't press too well, but we have to play like in the first half again.

The match was another significant stepping stone in Can's development. He is blossoming into a highly competent midfielder under manager and compatriot Jurgen Klopp, having spent much of his first season at the club playing in defence under predecessor Brendan Rodgers.

"I had a few mistakes and I have to play better sometimes but I have developed under Klopp. I have a lot of confidence," Can said.