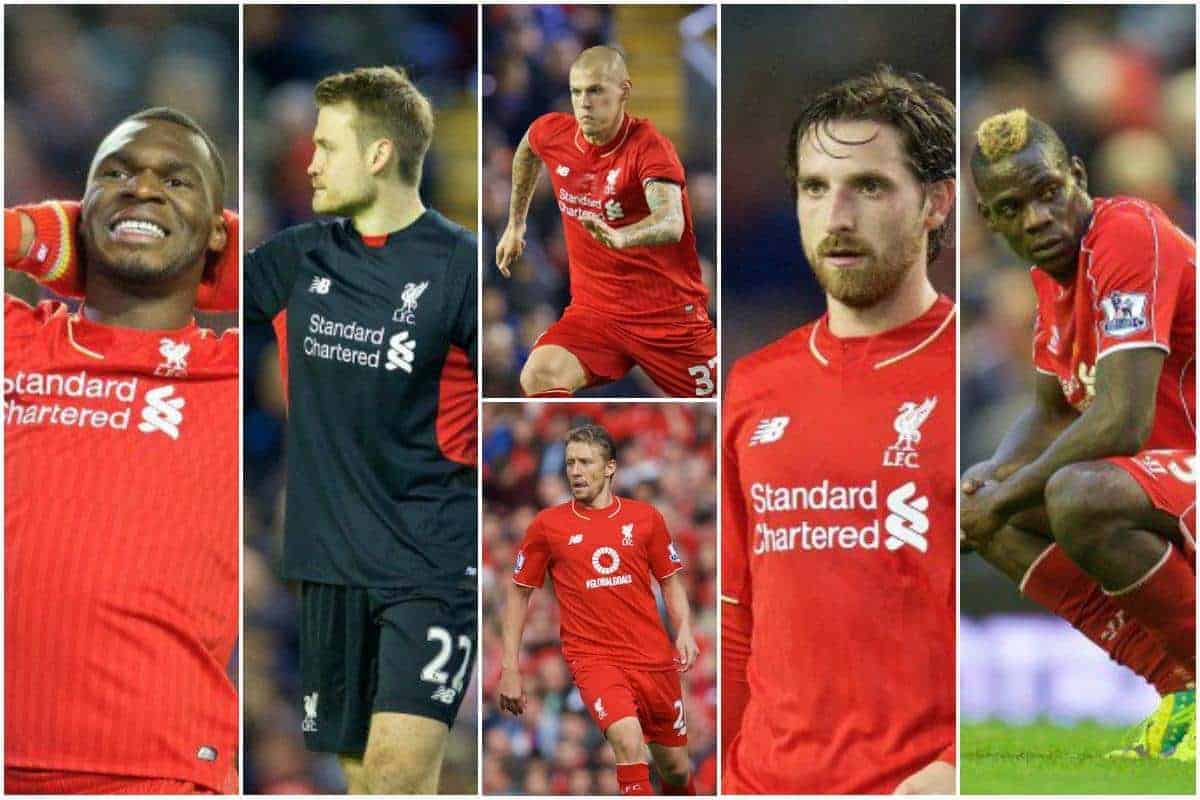 Another major overhaul could be on the cards at Liverpool this summer, if Jurgen Klopp funds his rebuilding project with a number of high-profile sales.

While he won’t admit it openly, the squad Klopp inherited when he arrived at Liverpool in October is littered with deadwood.

The Reds’ struggle for consistency under the German so far has outlined the need to rebuild this summer, and Klopp will no doubt have identified the players who have no future on Merseyside.

Liverpool have been linked with myriad summer targets, and while Fenway Sports Group are set to hand Klopp a significant transfer budget bolstered by close to £100 million of TV money, this will likely require boosting with sales.

If Klopp sheds his squad of deadwood this summer, this could add £77 million to his coffers—and here’s how.

Mignolet’s future on Merseyside is a contentious subject, as while the Belgian was handed a new five-year contract in January, his position as Liverpool’s No. 1 has continued to come under question.

Reports have linked the Reds with German goalkeepers Timo Horn and Marc-Andre ter Stegen this season, suggesting Klopp could be looking to upgrade on Mignolet.

If his new deal was a case of asset protection, Mignolet could expect to command an eight-digit transfer fee this summer; and while his top-level quality is questionable, he wouldn’t be short of suitors. The writing is on the wall for Bogdan at Liverpool, with last summer’s free-transfer signing demoted to the U21s after Klopp recalled Danny Ward from a loan spell with Aberdeen.

Bogdan is odds on to leave Merseyside this summer, and £1 million is a reasonable valuation for the goalkeeper—who may need to drop back down to the Championship in search of first-team football.

Like Mignolet, Skrtel has recently signed a new long-term contract, ending speculation over a move to Inter Milan by penning a three-year deal in July; but, like Mignolet, his position under Klopp is in doubt.

An abysmal display in Liverpool’s 3-2 defeat away to Southampton underlined the Slovak’s depreciation in quality, with Skrtel synonymous with the Reds’ defensive failings over the past nine seasons, and as Joel Matip arrives this summer, he could be pushed down the pecking order.

With the likes of Inter expressing an interest in Skrtel last summer, it is unlikely that Liverpool will struggle to find a buyer, though at 31, his value continues to decrease.

Ilori is undoubtedly a centre-back of considerable quality and vast potential, but since his £7 million move to Merseyside in 2013, the Portuguese has struggled to find a sustained level of form, with fitness issues hampering his development.

Only named in Klopp’s Premier League squad on one occasion so far this season—as an unused substitute in December’s 1-1 draw with Southampton—the former Sporting CP man has failed to make an impact under his new manager.

Liverpool could well take a loss on Ilori but, at 23, he is likely to be moved on this summer.

Another player to extend his terms with Liverpool ahead of the 2015/16 campaign, Wisdom was then sent to Norwich City on loan—a questionable decision, given his backup status in East Anglia.

Wisdom has struggled to carve out a regular role under Alex Neil at Carrow Road, and while he may return for pre-season under Klopp, can expect to be sold; valued at £3 million, Wisdom could be a bargain signing for a title-chasing Championship side.

With Emre Can continuing his development into a key player under Klopp, Marko Grujic arriving this summer and both Granit Xhaka and Piotr Zielinski heavily linked with moves to Liverpool, the Reds’ midfield ranks could be hugely competitive in 2016/17.

This leaves Lucas on the periphery, with the Brazilian currently serving as backup to Can and Jordan Henderson in Klopp’s 4-2-3-1.

Perennially linked with a move away from Liverpool, the long-serving midfielder could finally leave the club this summer, and at 29, is likely to generate plenty of interest around Europe. “I know he misses Swansea and home so it’ll be interesting to see what happens because I know his contract’s running out,” Swansea City midfielder Leon Britton said of Allen in February, highlighting the Welshman’s quandary this summer.

Entering the final year of his Liverpool contract in 2016/17, Allen looks unlikely to extend his stay on Merseyside at this stage, and linked with a return to Swansea, could be offered to perfect opportunity to exit.

An accomplished Premier League midfielder, Allen would be a great signing for the Swans or any other mid-table side. With all the focus on Jon Flanagan‘s contract situation in 2016, Rossiter’s position has been glossed over somewhat; but as the season reaches its conclusion, the 19-year-old is yet to be offered an extension on a deal that expires in July.

If Rossiter leaves the club on a free transfer this summer, Liverpool would receive a tribunal fee, with £3 million a sensible valuation.

Teixeira is another player who could leave the club on a Bosman this summer, with Klopp hinting in January that the Portuguese midfielder would benefit from a move away from Liverpool.

Most recently linked with Fiorentina, Teixeira would require a compensation fee of around £250,000 if he moves abroad, but at least £2 million if he remained in England.

Though his impressive form on loan at Deportivo la Coruna has seen some sections of the Liverpool support call for a return to Merseyside this summer, Alberto is likely to break into Klopp’s first-team squad.

Instead, his performances at the Estadio Riazor could see his value rise ahead of a permanent transfer this summer, and the Reds could expect a minimal loss on their 2013 outlay.

Whether AC Milan push for a permanent deal this summer or not, Balotelli is near guaranteed to leave Liverpool at the end of the season.

The Italian’s languid style of attacking play would jar with Klopp’s high-intensity system, meaning a summer switch would suit both parties—while Liverpool would likely need to take a hit on his transfer fee, there should be plenty of clubs willing to gamble on the striker’s ability.

Sinclair is another academy talent set to leave the club on the expiry of his contract this summer, with the 19-year-old the subject of interest from Watford and Aston Villa as he plays out the final months of his spell at Liverpool.

The Reds are believed to value Sinclair at £3 million, and this is likely to stick if his move goes to a tribunal.

Benteke’s comments on his bit-part role under Klopp during the international break, saying “I would have never signed for Liverpool if I wasn’t the manager’s first choice,” have all but confirmed his position at the club this summer.

With Atletico Madrid, West Ham United and Juventus all linked with summer moves for the Belgian, the Reds won’t struggle to shift Benteke, but are unlikely to recoup the £32.5 million fee they paid Aston Villa to secure his services ahead of 2015/16.