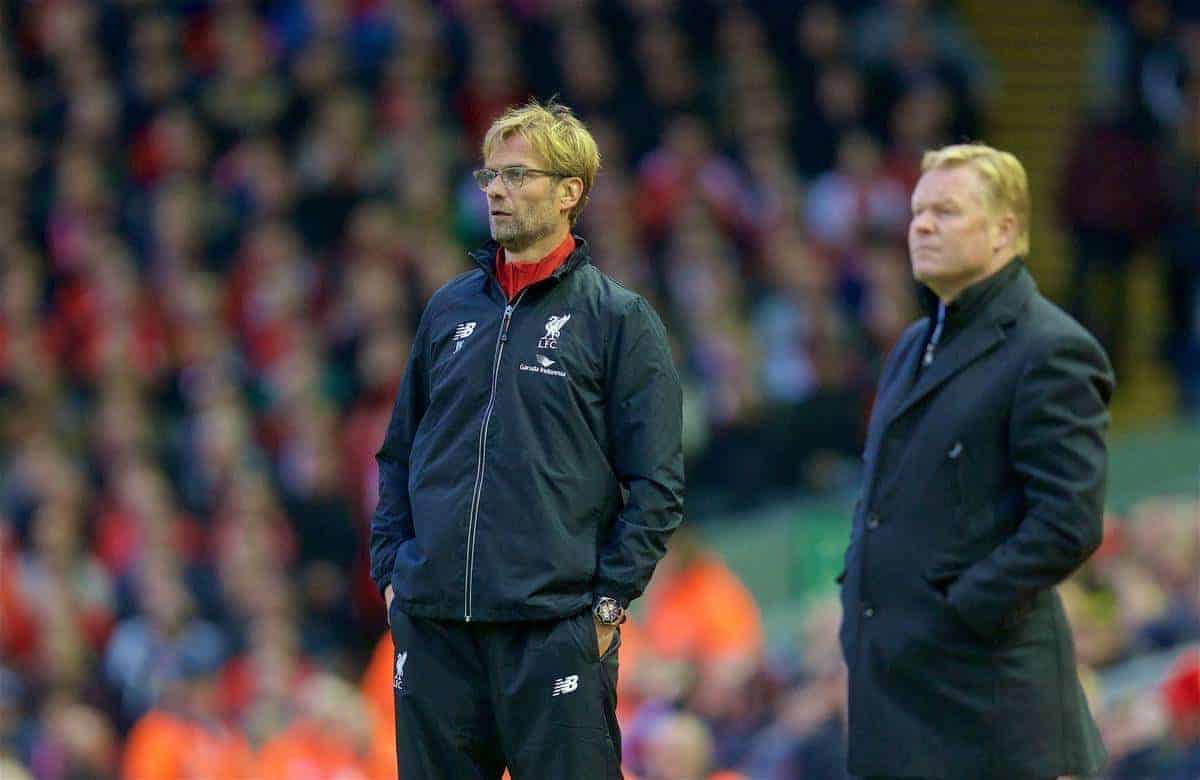 Liverpool manager Jurgen Klopp refuses to put limits on what his side can achieve this season with the Reds currently riding the crest of a wave.

He admits their Barclays Premier League destiny is largely in the hands of others but they could receive a huge favour from their rivals this weekend as their unlikely bid for the top four gathers momentum.

West Ham, in fifth, head to Chelsea while on Sunday there is the Manchester derby and, as Liverpool trail fourth-placed City by seven points with a match in hand, there could be more ground to be made up if they can register their fourth successive league win for the first time in 12 months at Southampton.

Knocking arch-rivals Manchester United out of the Europa League in midweek has boosted morale further and Klopp is keen to tap into that but he will not set his players a target as they chase the top four.

“If it would help I would do it but I don’t think it makes too much sense because there is only Southampton and then there is a two-week break where all the players are all around the world and so that is pretty difficult,” he said.

“They have two pretty important games for their national teams and it is the last test before the squads will be made for the European Championships so it is an intensive time for the players.”

Asked whether there was still the possibility to do something special in the final two months of the campaign, Klopp added: “The only thing I can say is ‘hopefully’.

“It is difficult to imagine what could happen but the only thing we can do is do our best and get whatever we can get and that is what we have tried in the last few weeks.

“In the position we are in if you want to get up in the table you have to watch what other teams are doing, which makes no sense as we have no influence over it.

“We have to win our games as often as possible and see what happens.”

Liverpool left-back Alberto Moreno is a doubt for St Mary’s after missing Thursday’s game with a hamstring problem but Klopp at least has an ideal replacement.

Against United he had to deploy midfielder James Milner at left-back as Jon Flanagan was not registered but the 23-year-old academy graduate will return at the weekend buoyed by signing a new three-year contract.

Flanagan would most likely come in on the right with another former Saint Nathaniel Clyne switching to the left, as he has done previously this season.

Southampton are still smarting from a 6-1 thrashing by Liverpool in the Capital One Cup in December, their worst home defeat for 56 years.

Boss Ronald Koeman urged his players to learn the lessons from that night, saying: “It’s not about revenge.

If there is any revenge feeling from the players then maybe that’s good, but we have to learn from our mistakes.

“That night they showed us how to be clinical with really high-quality movements in attack and we gave them the space to punish us and that’s what we have to learn, to be more compact and more aggressive.

“I’m expecting a difficult game. They have really strong team, and they have lots of options. They have just had two good results against Manchester United.

“It was a must-win game for us against Stoke and it’s the same this weekend.”

Captain Jose Fonte returns to the defence after missing the 2-1 victory at Stoke last weekend through suspension and midfielder Victor Wanyama has completed his three-match ban.