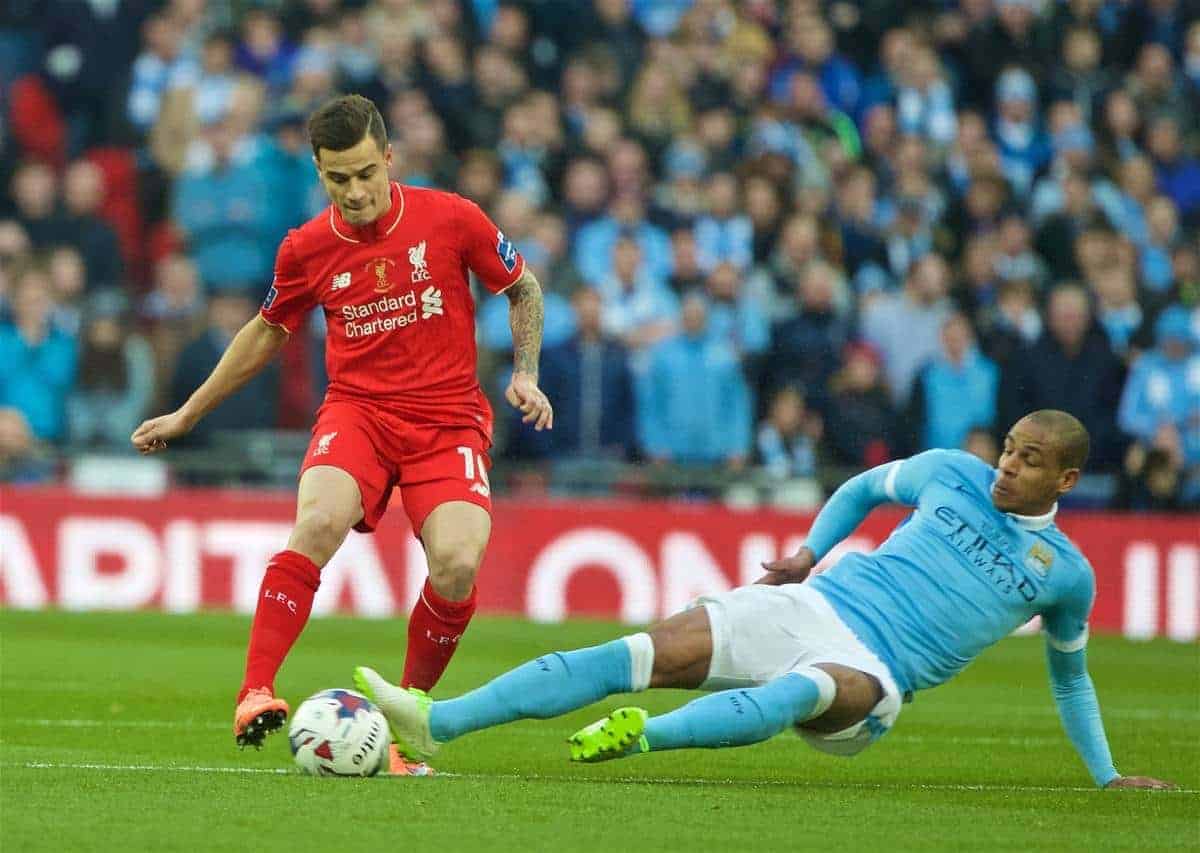 Sunday’s penalty shootout loss was tough to take for everyone associated with Liverpool Football Club, as a wonderful chance to win a first piece of silverware in four years passed Jurgen Klopp‘s side by.

The fact that they meet City just three days later gives them a perfect opportunity to respond, and Anfield will hopefully be at its atmospheric best for the arrival of City.

While the league will now very much play second fiddle to the Europa League, three points for Liverpool will both enhance their chance of a top-six finish and dent City’s title hopes in the process.

It is a very tricky game to predict, given the amount of energy that both teams expended at Wembley, and it would be a surprise if the personnel on the pitch wasn’t much-changed.

Nothing but a victory will do for Manuel Pellegrini’s men, but Liverpool will come at them with everything they have got.

This game last season resulted in a 2-1 win for the Reds, with Jordan Henderson and Philippe Coutinho on target. Coutinho has more goals against City than any other side (five). You can see all the Liverpool vs Man City Head to Head results here. Both teams have been hampered by two things in 2015/16: consistency and injuries.

Neither have been able to get on a roll at any point, barring a brief early surge from City, and the likes of Daniel Sturridge, Philippe Coutinho, Vincent Kompany and Kevin De Bruyne have all missed significant chunks of action.

Liverpool have managed just four wins in their last 10 matches, in all competitions, but have also lost just three times. That sums their campaign up – you genuinely never know what performance is coming next.

The hope is that Sunday’s defeat ends up being something that spurs them on, rather than a season-ender. Under Klopp, it would be a huge surprise if they now tailed off completely. City may have lifted the cup at the weekend and produced an impressive performance away to Dynamo Kiev in the Champions League last week, but their league form is not good at all.

Pellegrini’s side have lost their last two games in the competition, and the fact that they were both at home to title rivals Leicester City and Tottenham made the losses extra damaging.

Having looked favourites to win a third Premier League crown for much of the season, they have too often lacked spirit, and peripheral players have failed to step up to the plate in the absence of key men.

City showed on Sunday that they will always be a force with Kompany, Yaya Toure, David Silva and Sergio Aguero all fit, though, and they may be ready to mount an unstoppable winning run.

There are likely to be lots of tired legs on both sides after the intensity Sunday, and that is likely to see new faces come in.

Lucas Leiva is definitely out for Liverpool, having picked up a muscle injury in the penalty shootout, while Daniel Sturridge appears unlikely to start too.

Jordan Henderson once again didn’t look fully fit at Wembley, and it may be that Klopp gives the captain the night off against City.

Dejan Lovren and Martin Skrtel are available again after injury, while Mamadou Sakho is still being assessed after the concussion he suffered at the weekend. Joe Allen and Adam Lallana are also in contention to start.

City’s Toure could miss the game with a footy injury, but in truth, the 32-year-old was always unlikely to play two games of such intensity in succession.

There are no other injuries of note for Pellegrini, but given the age of his squad, expect to see some squad players thrown in at Anfield.

What The Managers Say

Klopp gave his injury verdicts prior to the game:

It doesn’t look too good for Lucas, he won’t be available. We had problems with the muscle, when he shot the penalty.

He’s got some more problems, so he’s not available, We have to wait, but I don’t think so.

With Mama I don’t know exactly, we had to make a decision in the moment. I think it was the right decision but we have to wait until a final judgment. [There is] nothing new in this moment.

Daniel with the cramps. We don’t want to risk [him for] tomorrow. But if he’s available, he’s available. You will see the lineup tomorrow!

Pellegrini confirmed that Sterling would start at Anfield:

I don’t know what the starting XI will be yet, but one player who I’m sure will start is Raheem Sterling. He’s a young man, a young player starting his career, but he knows how to deal with pressure.

He’ll receive the same treatment tomorrow as he did at the weekend, but I’m sure he can play without a problem, and he’ll be a very important player, as he was in last game.

I don’t have any doubts about him, it’s important for him to play under pressure, that’s what big players do.

The bookies clearly believe it is a difficult match to forecast, and possible changes in personnel on both sides only makes it more tricky.

Aguero is the 4/1 favourite to score the opening goal at Anfield, although there must be question marks over whether the injury-prone striker will last the whole 90 minutes after Sunday’s excursions.

The same applies to Daniel Sturridge, who is 5/1 to net first, while the fact that youngster Kenechi Iheanacho is the same odds means he is likely to feature prominently.

Sterling is 13/5 to return to his former club and score at any time during the match. Nobody wants that.

Check out some more football predictions on matchstat.