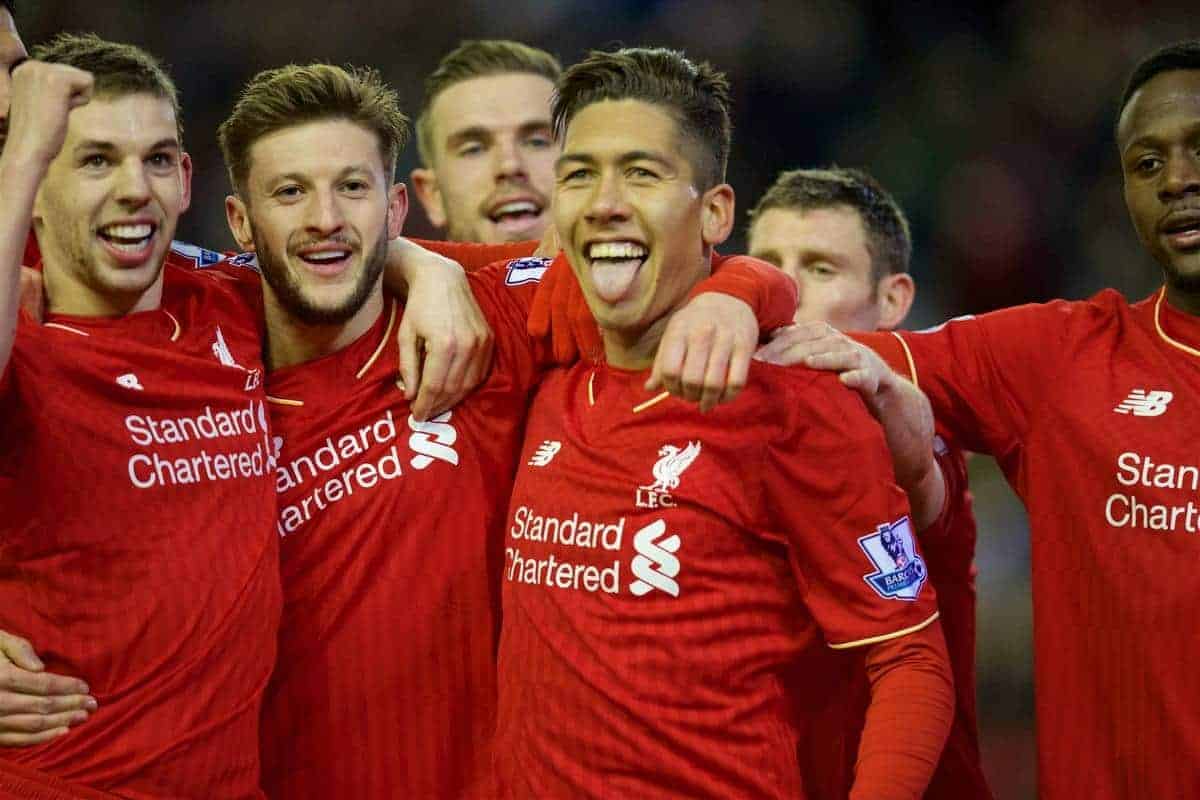 Liverpool visit Crystal Palace on Sunday afternoon, as the Reds look to build on their midweek victory over Man City.

Goals from Adam Lallana, James Milner and Roberto Firmino secured all three points for Jurgen Klopp‘s team, and there were outstanding performances all over the pitch.

Whether it be Jon Flanagan‘s fight, Milner’s industry or Lallana and Firmino’s class, it was a night full of positives at Anfield.

Palace are up next for the Reds, and while not much points towards a win for Alan Pardew’s side, Liverpool have often found Selhurst Park a very tough place to go.

The Reds’ entire 2015/16 campaign has been littered with inconsistent performances and results, and that is what will likely cost them a top-four finish.

Thrilling victories have been achieved, only for limp defeats to follow soon after. Their recent form has been exactly that.

The League Cup Final defeat to City was a devastating blow, while the last-gasp loss to West Ham in the FA Cup fifth round was also a sickener.

Despite this, Liverpool are now three games unbeaten in the Premier League, and look like potentially building a run of form between now and the end of the season.

Palace, meanwhile, are enduring a really tough time of things in the league, and have now not picked up a win in the competition in 11 attempts.

Their last victory came away to Stoke on 19th December, and the Eagles have really plummeted after such a strong opening few months to the campaign.

Pardew’s men drew 2-2 at Sunderland in midweek, with former Liverpool man Fabio Borini robbing them of all three points with stoppage time stunner.

They are still in the FA Cup, though, following an impressive 2-1 win at Tottenham in the fifth round, and visit Reading in the quarter-finals.

Every side has their own bogey team, and Palace have most certainly been Liverpool’s in recent years.

The Reds haven’t beaten the Eagles since a 3-1 win at Anfield in 2013, with Luis Suarez, Daniel Sturridge and Steven Gerrard scoring the goals.

Since then, there has been the horrific 3-3 draw in May 2014, which effectively ended Liverpool’s title dreams, and two 3-1 defeats last season. The latter ruined Gerrard’s final ever home game for the club.

It was Palace who once again walked away with all three points when the two sides met earlier this season, with Scott Dann’s late header stunning Anfield and earning the visitors a 2-1 win.

There was at least an FA Cup win for the Reds at Selhurst Park last February, with efforts from Sturridge and Lallana sending Brendan Rodgers’ side into the quarters.

Klopp has been dealt an injury blow with the news that Lucas Leiva will be out for five or six weeks with a muscle problem picked up at Wembley last weekend.

The Brazilian has been excelling in a centre-back role of late, and his experience could be a loss against Palace on Sunday.

Mamadou Sakho may be back in contention, having missed the midweek victory over City with concussion, while Daniel Sturridge is definitely fit.

For the first time since he took charge in October, Klopp now has plenty of option in all areas, with the majority of his squad now available.

Connor Wickham and Wayne Hennessey are both rated doubtful for Palace, while James McArthur and Jason Puncheon are definitely out.

Yannick Bolasie is back from injury, however, and considering the speedy wide man turns into Pele whenever he faces Liverpool, he will pose a real threat.

Pape Souare returns from suspension, which means he could replace former Red Martin Kelly in the side.

Klopp believes a top-four finish is still achievable for his side:

Six points is not the world. In our situation I would like to say we take each point but we have to show it.

From now on the work can be completely different if we want.

We need to stay angry – it is not that we are always looking for our game and which style [to play]. You need [to find] a way and then go.

This is the most important part of the league, the rest of the season has been preparation for these last few yards.

Pardew is wary of the threat Liverpool pose, but feels a first win in 12 could happen:

Liverpool were terrific [in midweek]. That high-pressing game is exciting to watch. It doesn’t always work though.

If we can find a way around that [high press], we can cause Liverpool problems like we have done in the past. The Reds are the favourites to leave south London with three more points in the bag, with the bookies making them 23/20 for the win.

Both the draw and a Palace victory are 13/5.

Sturridge, and rather bizarrely Christian Benteke, are the joint favourites to score first in the game at 9/2, while Divock Origi is 11/2. Wickham is 7/1 to open the scoring, despite being doubtful for the game.