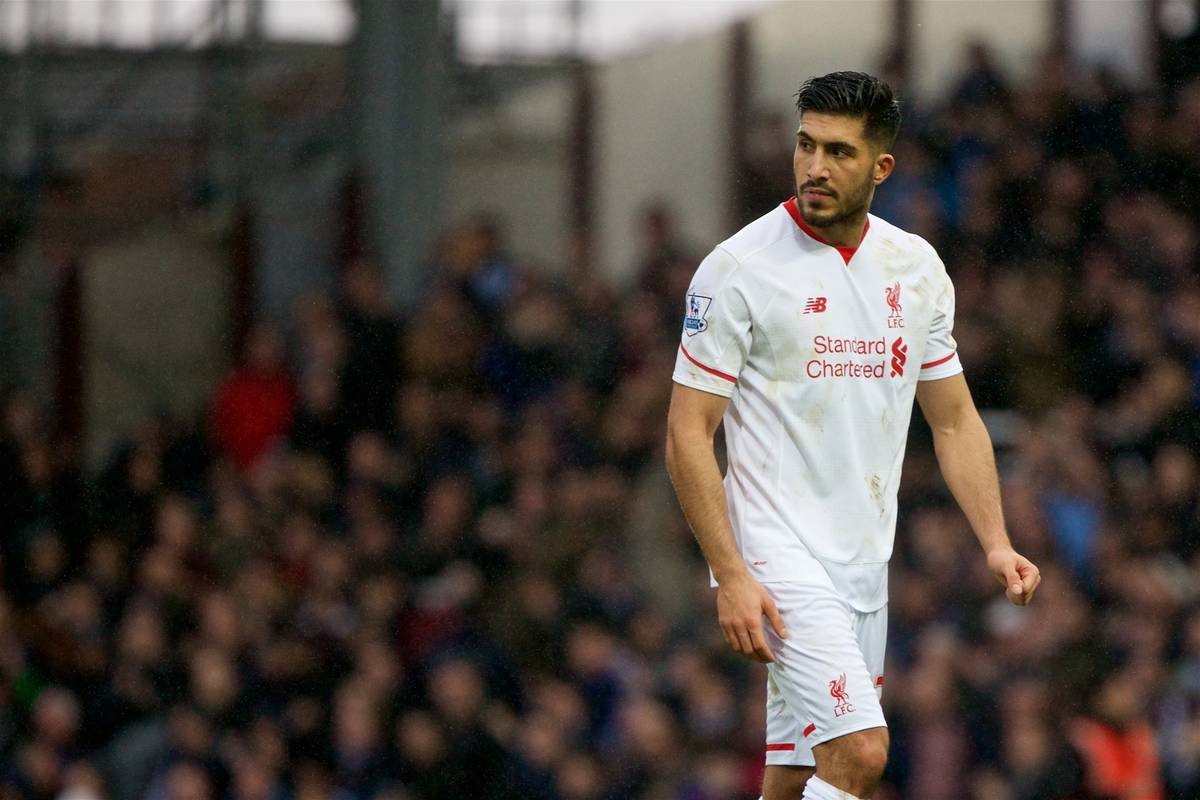 Emre Can has grown in importance under Jurgen Klopp at Liverpool, but the German will be forced to plan without his key midfielder for the next two league games. Can received his 10th yellow card of the Premier League campaign in Saturday evening’s 1-1 draw at home to Tottenham Hotspur, with referee Jonathan Moss cautioning the Liverpool man for a robust challenge on Dele Alli.

The 22-year-old will now miss Liverpool’s next two league outings, at home to Stoke City and away at Bournemouth‘s Dean Court, before returning for the Merseyside derby at the end of April.

This is a bitter blow to Klopp as he looks to build for a strong finish to the 2015/16 season, as Can has progressed into a key player since his arrival in October.

So how can Liverpool navigate this loss, and cover for the crucial role Can plays in midfield?

Can is a rare breed of footballer: a fully formed, all-round midfielder, built to shine in the box-to-box role, the former Bayer Leverkusen man can count few as genuine contemporaries, with Mousa Dembele standing out as the similar prospect in the Premier League.

Having joined Liverpool in a deal worth £10 million in 2014, Can has swiftly developed into a key role on Merseyside.

Spending much of his time under Brendan Rodgers as a makeshift defender, either at centre-back or right-back, Can earned a berth in his favoured midfield role on Klopp’s appointment.

“It is always like that [playing in different positions], but since Jurgen Klopp came I have always been played in midfield, which I think is my favourite position, and I like to play a lot there,” he explained in February.

“[Klopp] wants a lot from me, he wants me to push the team forward and to help them and that is what I want to try.”

It is this remit of pushing the team forward that has seen Can receive plaudits from around the Premier League throughout 2015/16, with his power, drive and endurance making him a formidable talent. Of Liverpool’s regular first-team fixtures, only four players—Jordon Ibe, Roberto Firmino, Philippe Coutinho and Divock Origi—have averaged more successful dribbles per 90 league minutes than Can (1.4), who keeps his head up in possession and looks to push towards the penalty area.

This is over twice the amount of his midfield partner, Jordan Henderson (0.6), highlighting the difference in their roles.

Can is also a similarly effective creative midfielder, registering 1.2 key passes per 90 to Henderson’s 1.3; while he is still a blossoming talent, the vision shown in laying on goals away to Manchester City in November and Southampton in December showed his potential as a playmaker.

Having spent a season in defence, Can is also adept at breaking up play, often operating in a deeper role to Henderson, and has averaged a combined total of five tackles and interceptions per 90 this season—again, more than Henderson, who has averaged 4.4 per 90.

But this strong, defensive approach has also seen Can cautioned more than any other Liverpool player this season, and now Klopp must plan without his midfield general.

In terms of covering ground, offering a constant outlet in possession and knitting defence to attack, Joe Allen is the closest player to Can at Klopp’s disposal this season.

Though not blessed with the German’s physicality, Allen possesses a tenacious edge and tactical intelligence that allows him to best dominant opposing midfielders, and this season has averaged 4.8 tackles and interceptions combined per 90 minutes—just 0.2 fewer than Can himself.

As he showed in March’s 3-2 defeat away to Southampton, Allen is comfortable operating in the box-to-box role in a midfield two; at St. Mary’s, Can performed in the deeper role, while Allen pushed forward in support of Coutinho, Lallana, Origi and Daniel Sturridge.

Furthermore, bar the ill-fitting James Milner (two), he is the most prolific creative player of any of Klopp’s central-midfield options, averaging 1.8 key passes per 90 league minutes this season.

Able to complement Henderson’s dynamism with an intellectual midfield game, Allen could be the best and most straightforward option to replace Can against Stoke and Bournemouth.

Can’s suspension is timed quite conveniently with the dates earmarked for the return of Brazilian midfielder Lucas Leiva, who has spent recent weeks recovering from a thigh injury sustained in February’s League Cup final.

Lucas has played a bit-part role in Klopp’s midfield this season, largely due to Can’s dominance and Henderson’s strength in a pressing system, with the 29-year-old’s limitations making him something of a burden.

But when called upon, Lucas has showcased his abilities—namely in the defensive sector, and most notably in the first months of Klopp’s reign.

Against Southampton in October, for example, Lucas made seven successful tackles and six interceptions, limiting the space around Saints midfielders Jordy Clasie and Victor Wanyama, while also prompting attacks with a patient, progressive passing game.

This season, Lucas has averaged a combined tally of 7.5 tackles and interceptions per 90 minutes in the league.

But as at Anfield in October, Lucas is only truly effective in a three-man midfield, with his lack of mobility a major hindrance in a pair, and as such if he was brought in to replace Can this month, Klopp may need to opt for a 4-3-3 or 4-4-2 diamond system.

Stewart, Chirivella or Brannagan: The Gamble

Saturday’s draw at home to Spurs may have consigned Liverpool’s Premier League campaign to no more than a futile exercise.

While the Reds have eight league games left to play, with Man United, Southampton, Stoke and West Ham United all between them and fourth-placed Man City, it is highly unlikely Klopp can inspire a late surge to a top-four finish.

Instead, the 48-year-old would be wise to focus on the Europa League—a competition unaffected by Can’s two-game suspension.

If this is the case, Klopp may be tempted to take a gamble in replacing Can against Stoke and Bournemouth, with a trio of hugely promising academy options in Kevin Stewart, Cameron Brannagan and Pedro Chirivella waiting in the wings.

In sporadic cup appearances this season, Stewart, Brannagan and Chirivella have showcased their potential as top-flight midfielders and, most importantly, are able to do so in a two-man unit.

Stewart is clearly in Klopp’s favour, having signed a new contract in February, though Brannagan’s industry and dynamism could make him the most suitable option alongside Henderson; overall, however, Chirivella is the more talented player.

Either way, Klopp could do worse in Can’s absence.