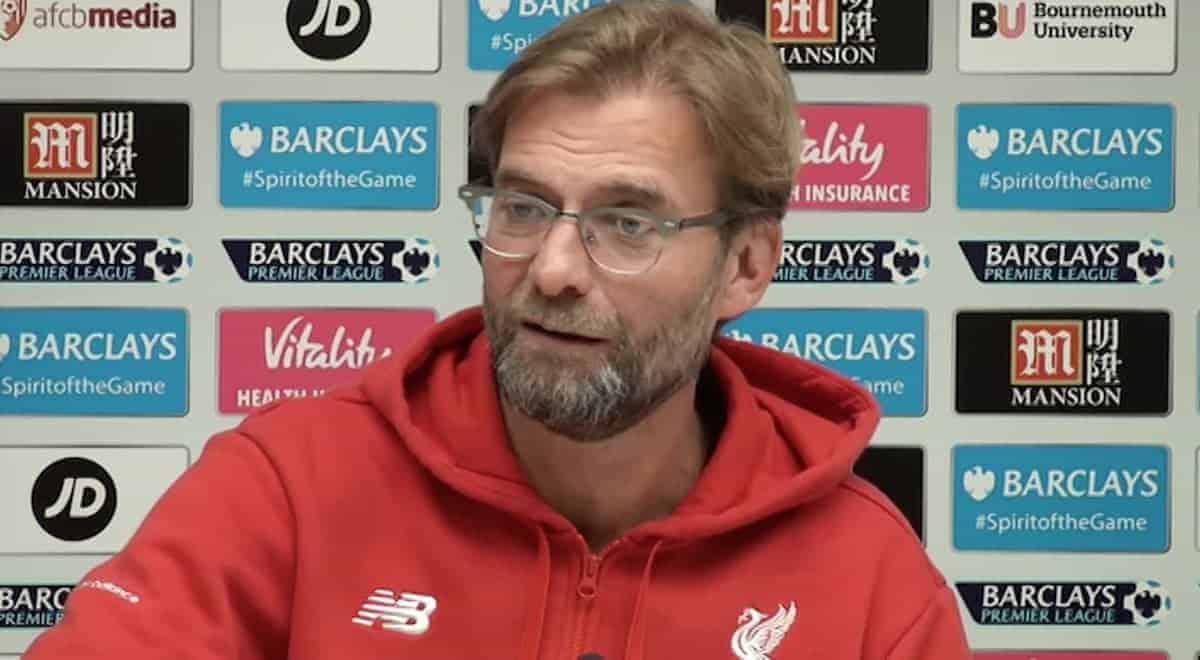 Jurgen Klopp took offence to a journalist’s questioning of him after the Reds’ 2-1 win at Bournemouth on Sunday.

Scoring one goal and laying on the other in Liverpool’s victory at Dean Court, Daniel Sturridge was the focus of much discussion at the final whistle.

The 26-year-old looked back to his best in attack, but it was far from a performance of individual brilliance, with Klopp’s much-changed lineup producing a strong all-round display.

Addressing reporters after the game, Klopp took exception to the first line of questioning, when asked about Sturridge’s performance.

“We have a football game and you want to talk about one player, in the first moment?” Klopp asked.

“That’s not the order I like. He was very good, but if you’re not interested in the game…”

The German was then asked about the number of changes made to his starting lineup for the clash and, still affronted by the initial question, used this opportunity to underline his stance.

“This is a game where you have 11 players,” he continued.

“Now we come to this, different positions, players—and you are only interested in one player?

“Each player had an influence today. If you want to ask the same for all of the other players, then we could theoretically [go on].

“I understand this as a team game.

“I enjoyed the game of Daniel Sturridge today—really I enjoyed it—he’s a great player, but starting with a question like this after a game, I can’t understand.”

Klopp went on to refute the suggestion that Sturridge won the game for Liverpool on Sunday, saying “we live on different planets.”

This was another glimpse of Klopp’s confrontational edge that spilled over from his time with Dortmund, but more admirably, it showed the manager’s focus on the team performance.

Sturridge was, irrefutably, the star of the show at Dean Court on Sunday—but with a rotated Liverpool side producing a comprehensive display away to Bournemouth, Klopp’s wider focus is justified.