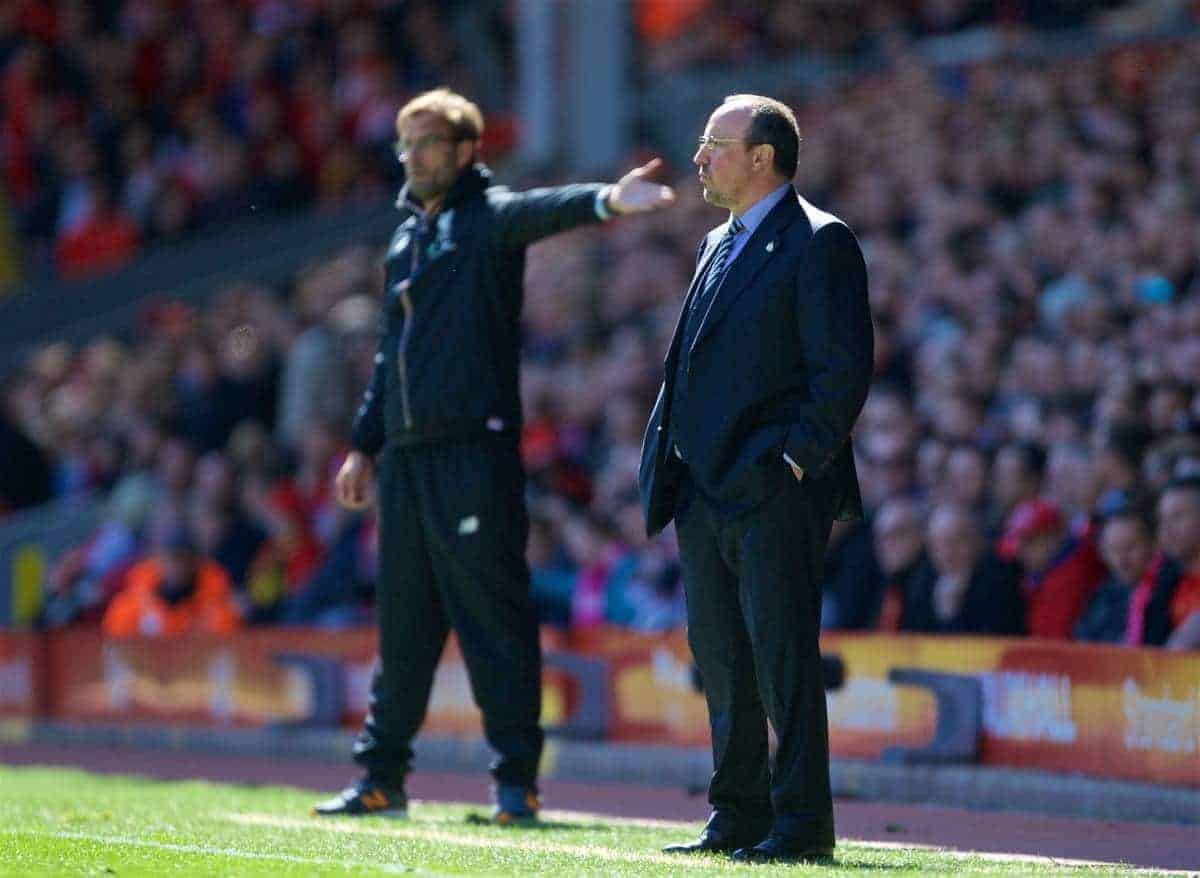 Chris Williams reflects on Saturday’s draw with Newcastle, and looks ahead to a huge week for the club with the Europa League semi-final first-leg.

If Robert Louis Stevenson were a football fan he would undoubtedly be a Red; his experiences as a Liverpool FC supporter would allow his mind to dream up the strangest cases of Dr. Jekyll and Mr. Hyde.

Again on Saturday he would have left Anfield with the epilogue to another volume of the classic tale of a man who creates a potion to stop the hidden evil within him.

Thankfully there was enough on display against Newcastle in the first half to give the Anfield faithful hope that Jurgen Klopp is building the very potion to take Liverpool back to the top; however, it is tempered with the calamity that besieges the squad at times to self implode when cruising.

Not for the first time this season Simon Mignolet came for a ball he should never have committed to; a life line to the opposition, one that can be built upon and damage sustained. The Belgian ‘keeper did little to quell the tide of support for Liverpool to obtain, as a priority, a more reliable goalkeeper in the summer window.

As the dust settled at Anfield on Saturday evening the reflection was of another two points dropped from a winning situation; 19 now in total, the worst return in the league.

Whilst Klopp builds a system, and mindset, that allows results like Dortmund to flourish his system also identifies that he has at his disposal players who simply cannot cope when required to see matches out from the winning position. What should have been a routine final 30 minutes against Newcastle turned into a scrap for a solitary point, the chance to be 1 point behind Manchester United in 5th gone; and with it, any real possibility of a fight for the all important 4th Champions League place.

Liverpool now have a 3 game shoot out to secure a return to Europe’s elite but they will do it without the very players they have relied upon so far – Mamadou Sakho the latest in a line of absences; for what could be the most bizarre mistake a professional player could make, a failure to scrutinise the key ingredients of a dietary supplement.

The genral expectation of Sakho’s layoff is between 6 and 24 months if UEFA are to find him guilty of a contravention of anti-doping laws.

Villarreal are now the only club that stands between Liverpool and a return to the Final of Europe’s secondary club competition, albeit this time in its disguise of the Europa League and not the UEFA Cup.

The Spanish side currently sit fourth in La Liga, the best of the also-rans, behind the trinity of Real, Barca and Atletico.

Villarreal’s nickname is the Yellow Submarine, the Liverpool connection is strong for without The Beatles song of the same name there would be no ‘Submarino Amarillo’, Liverpool will look to write their own lyrics to this encounter away at the Estadio El Madrigal on Thursday night before a return to Anfield which looks every inch the European bastion it used to be; the ground still rocking from the monumental comeback and victory against Dortmund.

Liverpool’s last 6 league and cup fixtures have produced 4 wins and 2 draws, with their Spanish opponents claiming 3 wins, 2 losses and a draw in their last 6 outings; the draw coming on Sunday night in a drab 0-0 home fixture versus Real Sociedad.

The lure of Thursday night’s game looked to be at the fore of the players’ minds on Sunday evening, expect a far superior Villarreal to test an under strength Liverpool in 3 days time.

Villarreal are experienced in Europe and have the ability to see matches out at home but a tendency to leak goals away; Liverpool will have to be at their disciplined best on Thursday night to drag a result back to Anfield whereby they can capitalise on a feeling that the good times are back at Anfield under the floodlights on a European night.

A cautious note though, Villarreal are free-scoring; more so than the perceived danger of Seville, the back to back Europa League champions.

If Liverpool are to go on and win the Europa League they will have to overcome the 4th best side in Spain over two legs and then a real possibility of facing the masters of this competition, Sevilla, in the Final.

However, the Reds will do this lighter than they have before in Europe, with Divock Origi, Emre Can, Jordan Henderson and Sakho all sidelined for different reasons – the spine of the side that started in Dortmund in the quarter-final.

As ever with Liverpool, if they are to win a trophy they will do so the hard way, Reds can only hope Klopp has enough potion to keep the unwanted Mr. Hyde away, as the Dr. Jekyll displayed against Everton is the only prescription Liverpool fans want to see as the fight for a Champions League place continues.