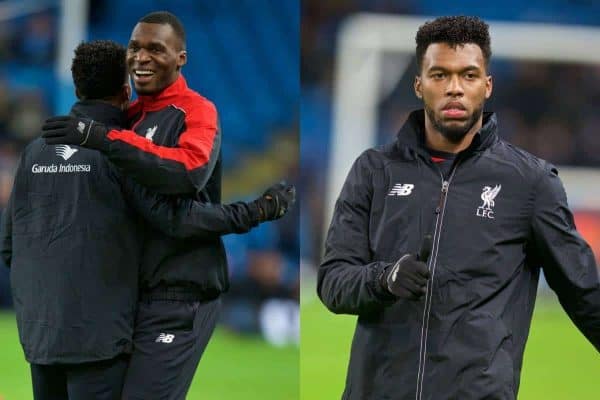 Sturridge and Benteke to start for changed Reds – Predicting Liverpool’s XI vs. Swansea

We take a look at how Jurgen Klopp could line his side up as the Liverpool manager makes his first trip to the Liberty Stadium to take on Swansea City.

The Reds head to Swansea looking to return to winning ways on the Premier League stage, just 57 hours after arriving home from an ill-timed first European loss this season.

Liverpool have little to play for on the domestic front, but the trip to south Wales at least gives Klopp and his squad the chance to move on swiftly from Thursday’s defeat to Villarreal, and to restore belief to the group ahead of the crucial second leg.

Klopp has made a habit of ringing the changes after European exploits and with recovery time extremely limited before the midday kick-off, the Reds boss has confirmed he will do so again with “fresh legs” and “fresh minds” needed at the Liberty.

Klopp has made no secret that changes will be made on Sunday and a youthful side is set to be named.

There are a whole host of lineups available to Klopp, but one that could tempt the manager is the possibility of deploying fresh duo Sturridge and Benteke as a strike partnership in a 4-4-2 formation.

Ibe and Ojo can come in to play the wide roles enjoyed in recent games, either side of Stewart and stand-in captain James Milner, which would allow Lucas Leiva and Joe Allen rest.

In defence, Ward, Randall, Smith and Martin Skrtel could join Dejan Lovren in forming a rotated rearguard ahead of Villarreal’s arrival, and those changes would see the Reds look like this on Sunday:

Alternatively, Klopp may want to stick to a more familiar setup that he has turned to recent games, with a 4-3-3 lineup a possibility.

In that, Flanagan could play instead of Randall, and if Klopp wants to completely change his back four, he could hand a surprise outing to forgotten man, Steven Caulker, alongside Skrtel.

Stewart and Milner could be joined by Brannagan or Chirivella for a three-man centre – with the young duo part of the squad that travelled to Spain – which would allow Ibe, Ojo and Sturridge to start in attack – keeping Benteke for a second-half appearance.

That would see Liverpool look like this come 12pm kick-off time on Sunday afternoon:

Sunday’s game is little more than a distraction sandwiched between vital European affairs, but victory would be welcome to provide a confidence boost ahead of Thursday’s crucial return leg.