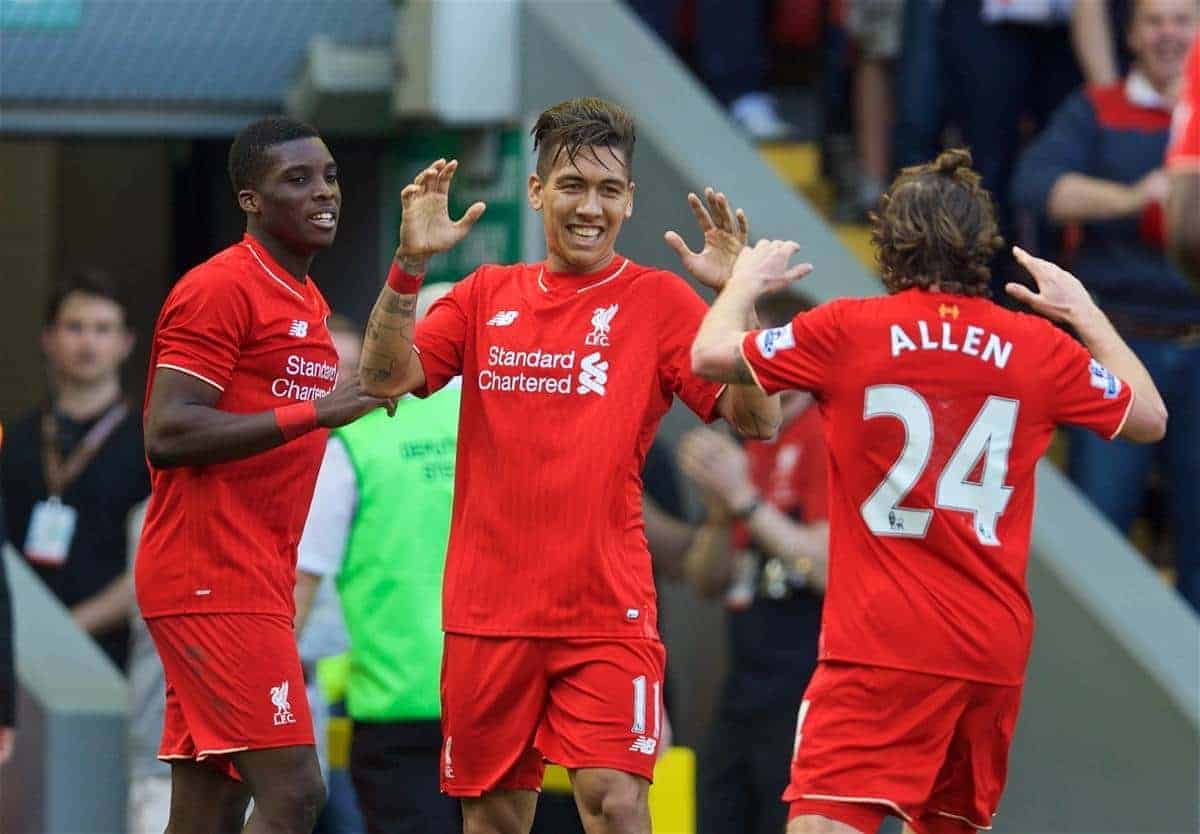 We take a look at how the media assessed Liverpool’s comfortable 2-0 victory over Watford at Anfield on Sunday afternoon.

Jurgen Klopp’s side enjoyed a routine victory on Merseyside where the Reds comfortably saw off Quique Sanchez Flores’ Hornets.

Played in a typical end-of-season atmosphere at Anfield, Liverpool’s first half domination eventually told on 35 minutes when Joe Allen opened the scoring, sliding in to convert Christian Benteke’s knock-down.

And in a more lively second period, substitute Roberto Firmino sealed the three points for the Reds with a composed finish from the edge of the box, capping off a productive and pleasing afternoon for Klopp’s much-changed team.

It was a much more enjoyable afternoon post European activity than last week in Wales, and here is how the media assessed the victory.

Reporters felt it was a deserved victory for the Reds and gave some interesting assessments on a comfortable afternoon for Klopp’s men.

This was as a comfortable an afternoon as Klopp has experienced since he arrived eight months ago and to see him laughing as the clock ticked down showed that.

The Guardian’s Andy Hunter felt Liverpool’s end product made the difference on the day:

There was little between Watford and a much-changed Liverpool pursuing a sixth-place finish in the Premier League aside from an end product.

Liverpool gave his players a lesson in execution.

Meanwhile, the Telegraph’s Chris Bascombe thought it as the sort of game Klopp will want to “banish” going forward:

Klopp will be satisfied but secretly he must have hated a fixture he compared to “afternoon tea”, such was the lack of fervour and emotion.

His priority is to banish such days when the league campaign offers nothing to quicken the pulse.

The Mirror’s David Maddock feels Klopp is re-establishing Anfield as a fortress:

Clearly, Klopp has already tapped into the power of this place. The German has now gone 12 games unbeaten at home, and is beginning to suggest – as this facile victory over Watford proved – the fortress is being rebuilt.

The Liverpool Echo’s Andy Kelly feels Klopp’s challenge is to ensure such Anfield games are as rewarding next season:

It’s gone almost unmentioned in the drama of their Europa League campaign but Liverpool have quietly racked up a 12-game unbeaten run at Anfield.

The task for Klopp is to make sure that Liverpool have sufficient quality in place next season to make sure “run-of-the-mill” games like this are equally as likely to produce positive results as the red-hot atmospheres of a Manchester United, a Dortmund or a Villarreal.

Enjoying a comfortable win despite boasting a heavily rotated side, reporters praised Liverpool’s professional approach which saw the points won with the minimum of fuss:

But the fact is Klopp made eight changes to his side on an afternoon when they could have been forgiven for taking their eye off the ball and extending it towards Basel…and they instead produced a performance of intensity.

Klopp made eight changes to the side that swept beyond Villarreal and into the Europa League final and, though a typical end-of-season affair took the place of Thursday’s intensity, the Liverpool manager was left with few complaints from a routine win.

Goal’s Melissa Reddy labelled the display “accomplished” if not inspiring:

It may have not been an inspiring display from Liverpool, but it was an accomplished one nonetheless.

The Liverpool Echo’s James Pearce credited the Reds for “comfortably” sealing the win despite mass changes:

Yet to their credit a much-changed Liverpool line-up comfortably wrapped up the points courtesy of goals from Joe Allen and substitute Roberto Firmino.

With the clash presenting a chance for fringe players of Klopp’s squad to prove their worth, reporters commented on individual displays of certain Reds.

Maddock felt Allen turned in another display that showed Klopp why he must be kept:

And he did well again today, getting forward often, showing off his eye for a pass and covering plenty of ground in the middle of the park, which should further endear him to the Reds boss.

It’s time for the Reds moneymen to offer him some new terms.

Allen provided the injection of energy and class required for Liverpool to control the middle of the park.

The Welshman made a slow start to the game and Liverpool were almost punished after one slack pass led to a Watford counter attack, but once he settled he was clearly the best player on the pitch.

Capped a quality performance with a well-taken goal when he surged into the box to beat Heurelho Gomes to Christian Benteke’s knock down. Of all the players on the fringes of Klopp’s first XI, Allen appears to be the one with the biggest claim for a starting place. He has looked like a stylistic mismatch at the club so often during his debut campaign, but on Sunday he linked up well with his attacking team-mates and gave Gomes quite a few scares. Benteke created three chances and dominated his ariel duels.

Maddock echoed on the Belgian:

The Belgian frontman has had a disappointing time at Anfield this season, but today showed that perhaps the naysayers have been too quick to pass judgement.

Pearce felt Martin Skrtel enjoyed a much better game against the Hornets’ physical front line than in December at Vicarage Road:

The sight of Ighalo will have been enough for Martin Skrtel to break into a cold sweat considering what he did to him last time they met.

However, this time Skrtel stood tall and dealt with the Nigerian frontman admirably.

When Ighalo burst in behind the Reds’ backline, Skrtel was always alert to the danger and he also made a crucial block to deny Almen Abdi.

Some of Liverpool’s young players received praise on a productive afternoon that aided their development.

BBC’s Mandeep Sanghera singled out the efforts of Kevin Stewart and Sheyi Ojo:

Midfielder Kevin Stewart, 22, impressed with his work-rate and 18-year-old Sheyi Ojo produced some neat touches on the right wing as he also played a part in the build-up to Firmino’s goal.

Teenager Sheyi Ojo was impressive again, pressing well and getting stuck into tackles while also carving out a treble of openings.

His performance wasn’t perfect by any means – he needed to take more of a chance and drift into central positions and gave the ball away too often – but his willingness to chase down the opposition when dispossessed shows that he has bought into the Klopp philosophy hook, line and sinker.