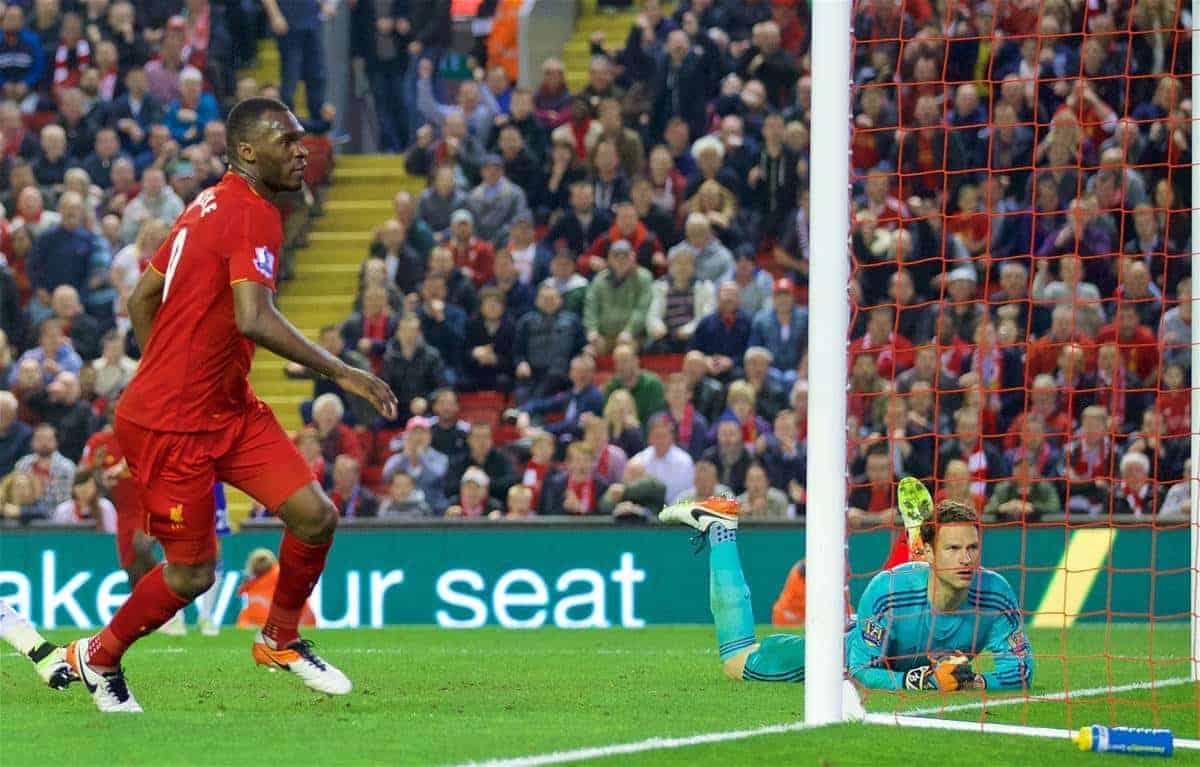 Christian Benteke scored a late equaliser to earn a point for Liverpool in their last home game of the season against Chelsea.

Eden Hazard had ripped through the Red defence just as fans ripped out the seats of the soon to be replaced Main Stand after the game, but Jurgen Klopp‘s men were able to take a share of the spoils in the last minute despite an underwhelming performance.

James Nalton was at Anfield to look at five talking points in a game which was full of effort but lacked composure.

Sturridge suffers a bout of the blues against old club

Former Chelsea man Daniel Sturridge was regularly taunted by the visiting fans during the first half, and from then on he tried his best to silence them, but perhaps he tried too hard.

An early free-kick which he sent into the upper tier of the Anfield Road end didn’t help, while a flurry of poor shots and a slip on the halfway line gave the impression that this game wouldn’t go his way.

He was put through on goal by Adam Lallana in the second half, but Asmir Begovic made a great stop from close range to deny him a goal.

It wasn’t for a lack of trying, and there’s no doubt he’s Liverpool’s best out-and-out striker, but he’d have liked a goal and a good performance going into next week’s final.

That said, he didn’t get injured, and that’s always a bonus given his history.

Fire, but no skill Roberto Firmino ran himself into the ground off the ball but couldn’t produce anything on it, Philippe Coutinho knew what he wanted to do but couldn’t quite pull it off, while Lallana resumed his habit of taking three touches too many in the final third.

The Red Machine was on display at Anfield tonight, but it might need a spot of oil before the Europa League final.

Even with some tweaks and minor repairs in the second half, the players still struggled to function properly.

The ball was passed directly out of play on a couple of occasions, and while the Reds worked hard to win possession back, they regularly returned it to Chelsea after they’d done so.

A warmup for the Europa League final starters Exactly a week before the Europa League final in Basel, Klopp picked a strong starting lineup, and it’s one that could start against Sevilla.

The same group of players performed brilliantly against Villarreal in the semi-final second leg, but they fell short tonight in this final home game of the 2015/16 season.

The manager changed to a diamond 4-4-2 in the second half in an attempt to liven things up, and it didn’t change too much.

The players put a shift in, but it took two fresh faces from the bench, plus a Begovic error, for Liverpool to claim a last-gasp equaliser.

Plan B for Benteke

Benteke put in a good performance in the 2-0 win at home to Watford, getting an assist for Joe Allen’s goal and generally putting himself about among the opposition defenders.

He was given around 15 minutes to make his mark on this game, and while he only had four touches of the ball during that time, he still managed to come up with the equalising goal.

Another substitute, Sheyi Ojo, hit a high, hopeful cross from the left which Begovic could only parry onto the head of Benteke.

The Belgian made no mistake from close range, but while this goal will please the fans and his manager, it doesn’t mean he’s pushing for a starting spot in the final.

However, a backup plan from the bench could prove to be very useful, and a Benteke doing what he does best – as opposed to the out-of-form striker we’ve seen at times this season – could make a difference if the game calls for his introduction. Simon Mignolet has made some impressive and important saves in the last couple of games which have helped his side keep clean sheets, and tonight the Belgian ‘keeper made several quality interventions to limit Chelsea on just the one goal.

Apart from a shaky moment when he found himself in no man’s land against Bertrand Traore, he stood up to his task when called upon, and couldn’t have done much about Hazard’s excellent finish.

Perhaps his most outstanding save of the game came in the 89th minute, when he managed to get a strong hand to Pedro’s shot after the Spaniard had found himself through on goal.

It could easily have ended 2-0, but not long after this save Liverpool were down at the other end of the pitch scoring their equaliser in front of the Kop.

Benteke may have his name on the scoresheet, but his compatriot between the sticks was just as important.