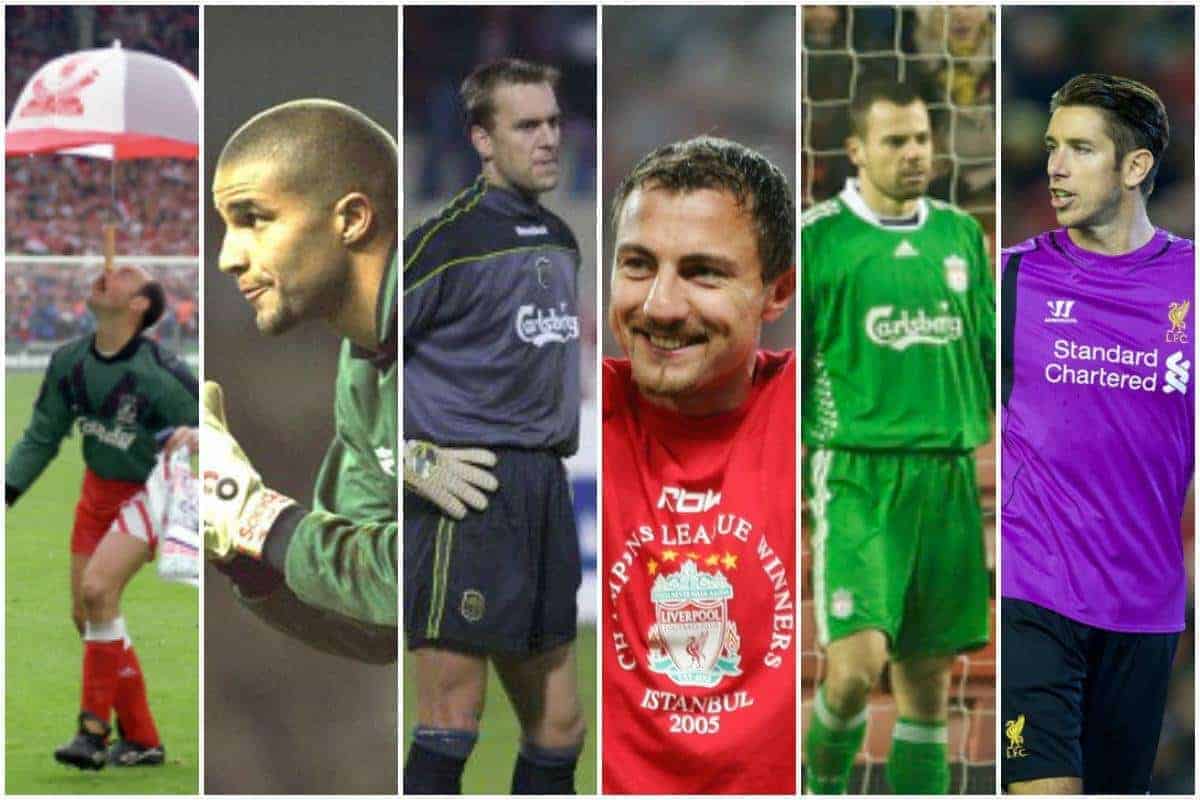 With Loris Karius taking the famous No. 1 shirt on his move to Liverpool, the goalkeeper is following some esteemed, and less so, names.

Karius completed his £4.7million move to Anfield on Tuesday afternoon, and is expected to challenge Simon Mignolet as the Reds’ first-choice ‘keeper next season.

At 22, the Germany U21 international is a hugely exciting prospect – only Manuel Neuer was rated higher in the Bundesliga last season.

Karius will take the No. 1 jersey at Liverpool, and in the process, he will join an eclectic mix of Reds ‘keepers to have worn the shirt during the Premier League era.

Some have been excellent, while others have been bordering on horrendous. Assuming Ray Clemence is top of the pile, which is the general consensus, there is a strong argument to say that Bruce Grobbelaar is Liverpool’s second-best goalkeeper of all time.

The Zimbabwean enjoyed 13 memorable years on Merseyside, having arrived as a virtual unknown from Vancouver Whitecaps in 1981.

One fantastic save to keep out Everton‘s Graeme Sharp in the 1986 FA Cup final was particularly memorable.

Grobbelaar’s antics in the 1984 European Cup final against Roma, in which his spaghetti legs antics helped Liverpool win on penalties, will forever ensure he is a part of Reds folklore, and his eccentric personality made him extremely likeable.

Admittedly, his best days were behind him by the time the Premier League started in 1992, but he still appeared 34 times for Liverpool in the competition, prior to his exit in 1994.

Tasked with filling the void left by Grobbelaar, David James spent seven years at Liverpool between 1992 and 1999, and was first-choice for a large chunk of that time.

The former England international actually enjoyed the finest years of his career after leaving Anfield, much like Brad Friedel, but the criticism he received from many supporters still felt over the top.

Admittedly, James was always capable of producing the odd howler – the nickname ‘Calamity James’ was harsh but fair – but he was always an integral member of Roy Evans’ talented Reds side of the mid 1990s.

James made 277 appearances for the club in total, but considering both he and Liverpool’s talent in the 90s, it is a travesty that he only won the 1995 League Cup during his time on Merseyside.

A great shot-stopper with excellent distribution – that aspect of his game would be loved by many modern managers – he was one of Liverpool’s better No. 1s of the Premier League era. With James departing for Aston Villa and new manager Gerard Houllier keen for an upgrade between the sticks, Sander Westerveld was signed from Vitesse Arnhem in the summer of 1999.

The Dutchman proved to be a solid goalkeeper during a short stay with the Reds – history has actually done him no favours.

Westerveld was largely consistent from the off, and he helped Liverpool become a tough side to break down under Houllier, marshalling the likes of Jamie Carragher, Sami Hyypia and Stephane Henchoz in front of him.

In his second, and last, full season at the club, he won an unprecedented cup treble, making the all-important penalty save from Andy Johnson to ensure Liverpool lifted the 2001 League Cup against Birmingham City.

He was also an ever-present in the Premier League that season, as the Reds reached the Champions League for the first time in their history.

Unfortunately, things ended on a sour note for Westerveld, whose form dipped at the start of 2001/02.

His dreadful late error against Bolton Wanderers early on in the campaign was the final nail in his coffin, and he was sold to Real Sociedad.

If history hasn’t been too kind to Westerveld, exactly the opposite has happened to Jerzy Dudek, despite arguably being an inferior goalkeeper.

Dudek joined for £4.85million on the same day as Chris Kirkland, on 31st August 2001, as Houllier made significant changes in his goalkeeping department.

During his first two years at the club, he managed to nail down a place as Liverpool’s first-choice ‘keeper, but he was never entirely convincing.

His much-publicised mistake against Man United in December 2002, in which he gifted Diego Forlan a tap-in, was a real low point.

It was in 2004/05 that Dudek cemented his place as a Liverpool legend, however, as Rafa Benitez’s Reds clinched the most remarkable of Champions League triumphs.

The ex-Poland international was a model of consistency throughout the campaign, and in the final against AC Milan in Istanbul, he enjoyed a career-defining night.

One miraculous save to deny Andriy Shevchenko kept the scoreline at 3-3 in extra-time, and his saves from the Ukrainian and Andrea Pirlo in the shootout sealed a remarkable victory.

Despite his heroics, Dudek found himself back-up to Pepe Reina in the couple of years that followed, and he moved to Real Madrid in 2007.

While the aforementioned goalkeeping quartet all brought varying degrees of quality to the Liverpool goal, the same cannot be said of Diego Cavalieri.

Benitez decided to acquire his signature in 2008, signing him from Palmeiras for £3.5million, but he never cut the mustard at Anfield.

His debut came against Crewe Alexandra in the League Cup in September 2008, but he only managed 10 appearances in total, outlining his lack of impact.

Cavalieri never managed to represent Liverpool in the Premier League, with Reina far and away Benitez’s main man in goal, and he joined Cesena in 2010.

He will be regarded as one of the Reds’ most forgettable No. 1s. The arrival of Brad Jones back in August 2010 seemed a curious one at the time, given a complete lack of pedigree, and he remains one of Liverpool’s poorest goalkeepers of the last 25 years.

Roy Hodgson’s decision to sign the Australian from Middlesbrough was indicative of his disastrous reign as Reds boss in 2010/11.

Jones only managed four appearances in his first two seasons, although he did make himself a hero briefly, following his penalty save from Yakubu as a substitute, in a dramatic 3-2 win at Blackburn Rovers in April 2012.

After Brendan Rodgers became manager, Jones continued to struggle to get much playing time, and a terrible display away to Oldham Athletic saw Liverpool knocked out of the FA Cup in humiliating fashion in January 2013.

Whenever he was given a chance, Jones simply never instilled confidence in the rest of the team, and it was clear that he had no future at Anfield.