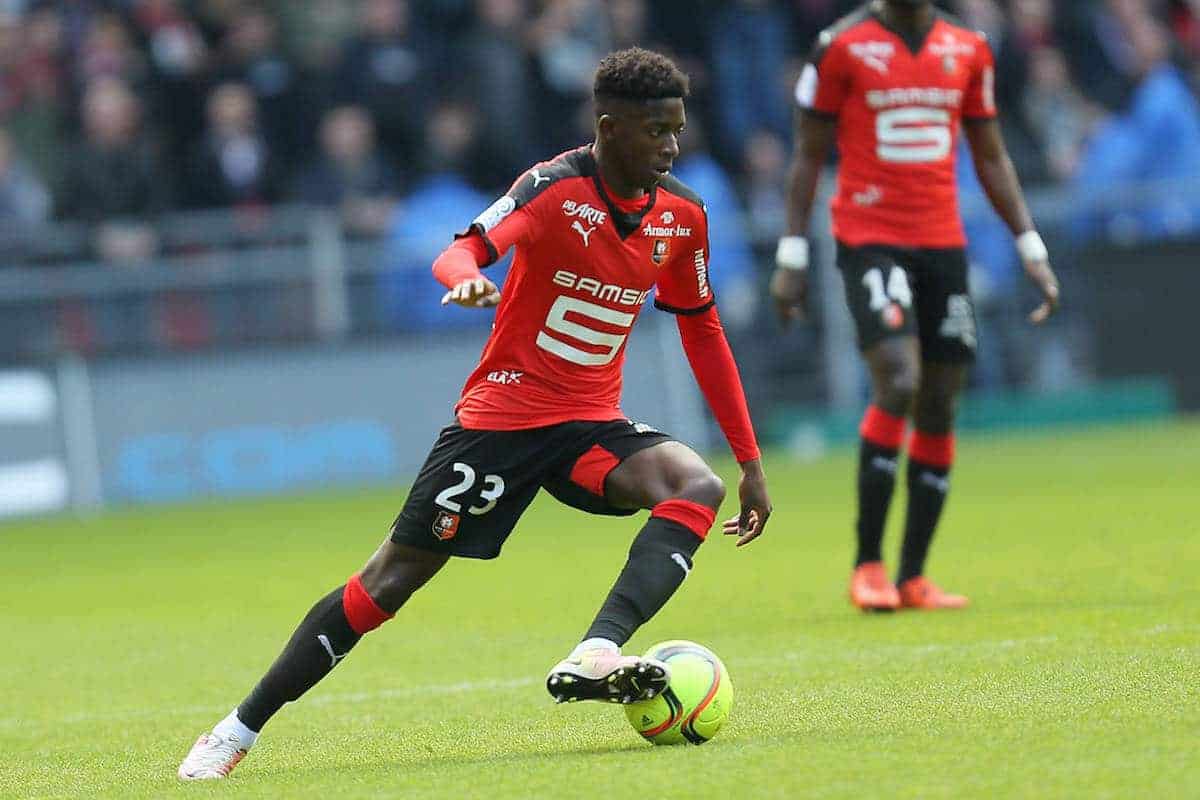 Liverpool are believed to be in direct competition with Borussia Dortmund to sign highly rated Rennes teenager Ousmane Dembele.

Dembele has risen to the fore as one of Europe’s most talented young players this season, scoring 12 goals and registering five assists in 25 Ligue 1 games so far.

Rennes have achieved a comfortable top-half finish in the French top flight as a result, with Dembele standing as Rolland Courbis’ side’s leading goalscorer.

The 18-year-old has been linked with a number of sides throughout 2015/16, including Bayern Munich, Leicester City, Arsenal and Manchester City.

But according to the Guardian‘s Ed Aarons, the Reds are joined by Dortmund as frontrunners in securing his signature.

Aarons writes that “Liverpool have moved into serious contention in the race to sign him, with Rennes asking for a fee potentially worth £27.6 million with add-ons.”

“Dembele is believed to have spoken to Klopp on the phone this week and is said to have been impressed by his plans for the Europa League finalists,” Aarons continues, “although it is not clear when a decision will be made.”

Klopp’s influence could prove pivotal, though Dembele is said have previously preferred a move to the Bundesliga, having visited Dortmund’s training ground in April.

Dortmund have already seen one bid rejected for the versatile attacker, but Rennes are believed to be more willing to sell to Thomas Tuchel’s side.

Nevertheless, Klopp is said to have impressed Dembele with his plans at Liverpool, and having knocked Dortmund out of the Europa League quarter-finals this season, with Champions League qualification on the horizon if they win this month’s final, they are credible competition.

Dembele is able to thrive on the left or right wing, as well as in the No. 10 role, and is equally as comfortable kicking off attacks from deep as he is driving forward on the counter.

Perhaps most impressive is the teenager’s dead-ball ability, taking free-kicks and corners for Rennes this season.

A truly prodigious young talent, Dembele would flourish in Klopp’s high-intensity attacking line, and despite his relative inexperience, looks set to shine at the top level for years to come.

Though £27.6 million is a hefty price tag for the youngster, Klopp would be wise to move for Dembele this summer—as Dortmund’s interest will attest to his quality.