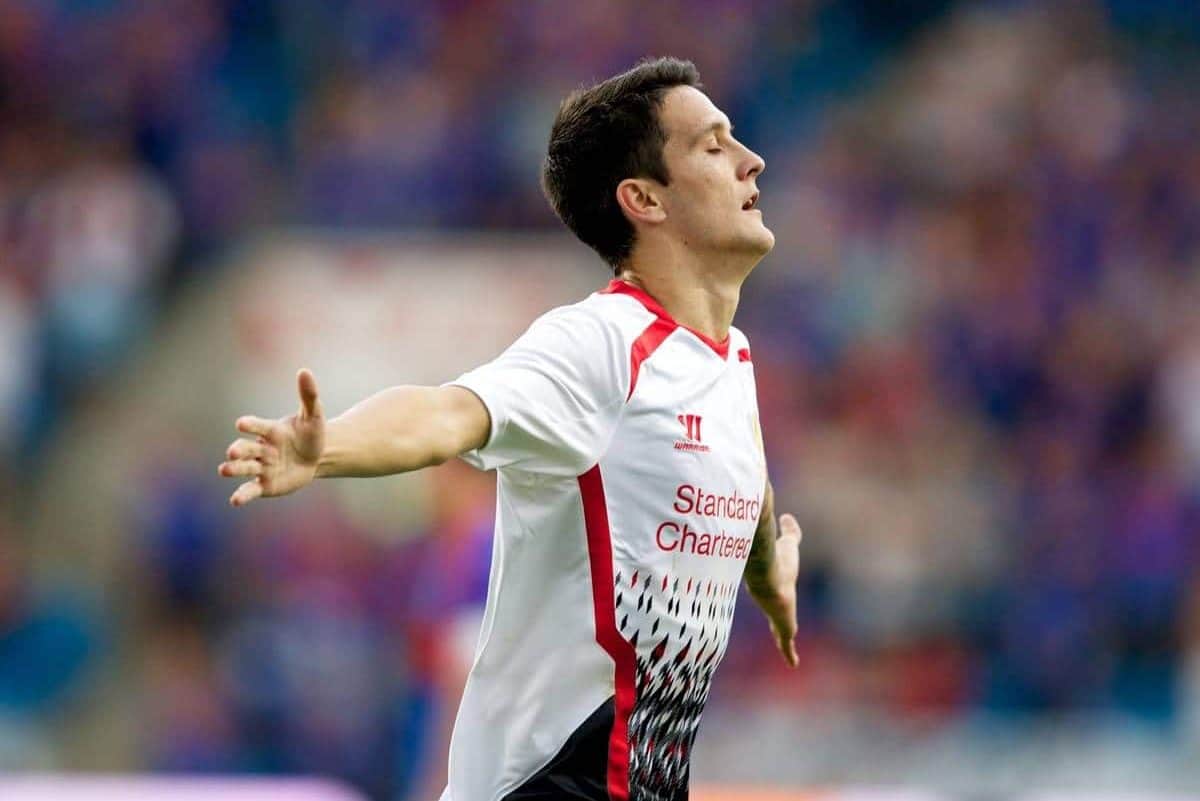 Liverpool’s policy of loaning out huge volumes of younger players may be coming to an end under Jurgen Klopp‘s management, but there were still plenty plying their trade elsewhere this past season.

One was Spanish playmaker Luis Alberto, who featured at Deportivo La Coruna in La Liga and had a far more productive year than he did at Malaga the previous season — but was it good enough to warrant a return to Anfield, yield a permanent move away…or was it simply another frustrating view of a player with talent and potential, but ultimately not enough of either to really cut it at the top level?

Alberto played a full part in Depor’s season as they ended in 15th place in La Liga, surviving relegation by four points despite an abysmal second half of the campaign.

Additional notes: Alberto played 2,227 minutes all told this season, comparable with Christian Benteke or Jordon Ibe from the Liverpool squad. He ranked in the top 10 in La Liga for average shots taken per game, but was the only one in that top 10 to score less than a dozen goals.

Having enjoyed a great first half of the year, Depor would have been hoping for a top-half finish, with Luis Alberto playing a prominent role as an attacking midfielder, predominantly from the left side.

However, their form disintegrated and they won just three times from December 5 onward—but Alberto’s individual form didn’t dip anywhere near as dramatically.

He was moved infield to play as the second striker for a large part of the new year, linking high upfield with star striker Lucas Perez and being a regular threat on goal from anywhere around the edge of the box — though, it must be said, often without tremendous accuracy.

Some of his best work came in the left channel even when he was a starter in the middle, as he linked with Depor’s other attacking options in quick triangles and looking for through-passes into the box.

Freed from too many defensive requirements, Alberto’s work rate was perhaps not the biggest or most critical aspect of his second half of the season and he would often drift a little deeper than the striker, seeking space and waiting to be the out-ball for his team rather than drop back in as a true fifth midfielder.

On a personal level he’ll be delighted that he contributed more to a top-flight campaign than he had previously managed in his career and it was a season of justification that he can impact in La Liga, even if consistency and one or two other issues remain.

Q&A: View from the fans

We spoke with Chris Moar, a football writer and follower of Depor, to get the lowdown on Luis Alberto’s second half of the season, just as we did earlier in the season.

Last time we spoke, Luis Alberto was a hero and Depor had enjoyed a fantastic first half of the season. It certainly didn’t finish that way from a team perspective, so how would you rate Alberto’s contribution over the second half of the year?

I think part of why we struggled was because Luis Alberto picked up three injuries in 2016. They didn’t keep him out for too long—one month was the longest—but it prevented us from having our most creative player on the pitch. Due to this, Lucas’ goals dried up as he was forced to turn provider.

Yet, when Luis Alberto did play, we seemed to go up a level; our attacking play was more incisive and unpredictable.

Having performed more often than not from the left early on, and you noting it was his most effective role, how do you feel he performed in the second half when used more often as a central option/second striker? Would you stick with your assessment that left is best?

Luis Alberto moving to a more central position was done to facilitate Faycal Fajr’s switch to the left-wing. It was done primarily due to the fact that, the closer Lucas and Luis Alberto are to one another, the likelier we are to prosper in the final third.

Luis Alberto is great as a second striker as he can use his slight figure to weave in and out of opposition tackles. The only issue is his finishing; while he scored a few this season, he also squandered many. That was the significant drawback of playing him in a position that requires decisiveness. Having said that, six goals & seven assists—for a Deportivo player in the last few years—is quite a high return.

Let’s talk weaknesses: you noted a lack of resilience and several injuries; did this show any noticeable improvement after playing an entire season?

If anything, it worsened. Luis Alberto looked weaker, physically speaking, in the second half of the season. If he found himself starting games, he’d be heaving and forced to come off after 60 minutes. That’s the main concern with Luis Alberto – and it’s a frustrating one.

You see his talent, and boy does he show it off too, but his fitness holds him back. He isn’t ready to play 90 minutes, once a week, consistently. That makes him a player you simply cannot depend on despite his excellent contributions on the pitch.

And if he can’t keep up with the rigours of La Liga, then I fear for his future at Liverpool under Jurgen Klopp‘s intense pressing. This is why I think he will definitely be off in the summer.

Luis Alberto has spoken about Klopp’s arrival ‘changing everything’ and wanting a return to Liverpool. Do you feel he has shown enough to warrant a spot in a squad which reached two finals and will clearly be hoping for a top-four run next term? Or has he found his level in a lower-to-mid-table zone?

I would like to say yes, and I feel as though he could contribute as a squad player, but as mentioned previously, I doubt that he would be able to keep up with the physical demands of the Premier League. Therein lies the issue: he can no longer just sit on the bench and pray for the best at Liverpool.

Luis Alberto is good enough to be playing regularly at other clubs. Has he found his level at “lower-to-mid-table” clubs? I’d say injuries and lack of stamina have forced him to stay at that level.

A fully fit Luis Alberto could start for Liverpool, I’m sure of it. But, if Liverpool want to challenge for that top-four as you say, then they simply cannot afford to depend on him.

Any final thoughts or words on your year with Alberto, and would you still take him if the chance was there next season?

This may have read as a negative summary of Luis Alberto’s year, so I’d simply like to offer clarity to my words: I think he has had an excellent season and would rank him among our top five players of the year.

Would I have him back? Yes. In a heartbeat.

Luis Alberto is the kind of player that makes something happen out of nothing and the relationship he has created with Lucas is something to simply marvel at. He fits the philosophy of this side and adds something special to our attacking movement.

Depor only won twice in 2016—a year that saw us almost face relegation—and it’s great to be able to say that Luis Alberto played a key role in one of those wins. His goal and man of the match performance vs. Levante will remain as one of the cornerstones of our season.

I wish Luis all the best, wherever he ends up, and part of me is still praying that he returns to Dépor.

The big problems facing Luis Alberto and any potential ongoing career at Liverpool are obvious and oft-repeated: fitness, endurance and end product.

While everyone witnessed his capacity to unlock defences—remember that chipped through-pass for Luis Suarez vs. Tottenham—it simply wasn’t on show often enough to warrant regular inclusion. This year he certainly stepped up the frequency with which he found an end product in the final third, but Alberto is now 23 years of age.

To put his task in context, his role this season at Depor as second striker is filled at Liverpool by Roberto Firmino, a big-money signing who has grown exponentially in his role over the second half of the season… and who is just a year older.

There is, blunty put, zero chance that Luis Alberto becomes a first-team player under Jurgen Klopp.

Add in Philippe Coutinho operating from the left, a Klopp favourite in Adam Lallana and the potential new addition of Mario Gotze or another attacking midfielder over summer, and it’s a very crowded area of the team at Anfield even without considering the young talents knocking on the door of the first team squad.

The alternatives are to keep him as a squad player, or sell. Another loan serves no purpose, with the Spaniard turning 24 soon into next season, and with no European football next term at Anfield, opportunities to make an impact in matches will be extremely limited.

In some ways, this season served its purpose for Alberto: he showcased an ability to influence games at the highest level of leagues, but not at the highest level of clubs. It should raise awareness in him as a player and there should be interested parties to take him for a reasonable fee over the summer, bringing in funds to spend elsewhere.

Attacking midfield is locked down though, and creative though he might be, this is one area Luis Alberto simply cannot find an opening in.