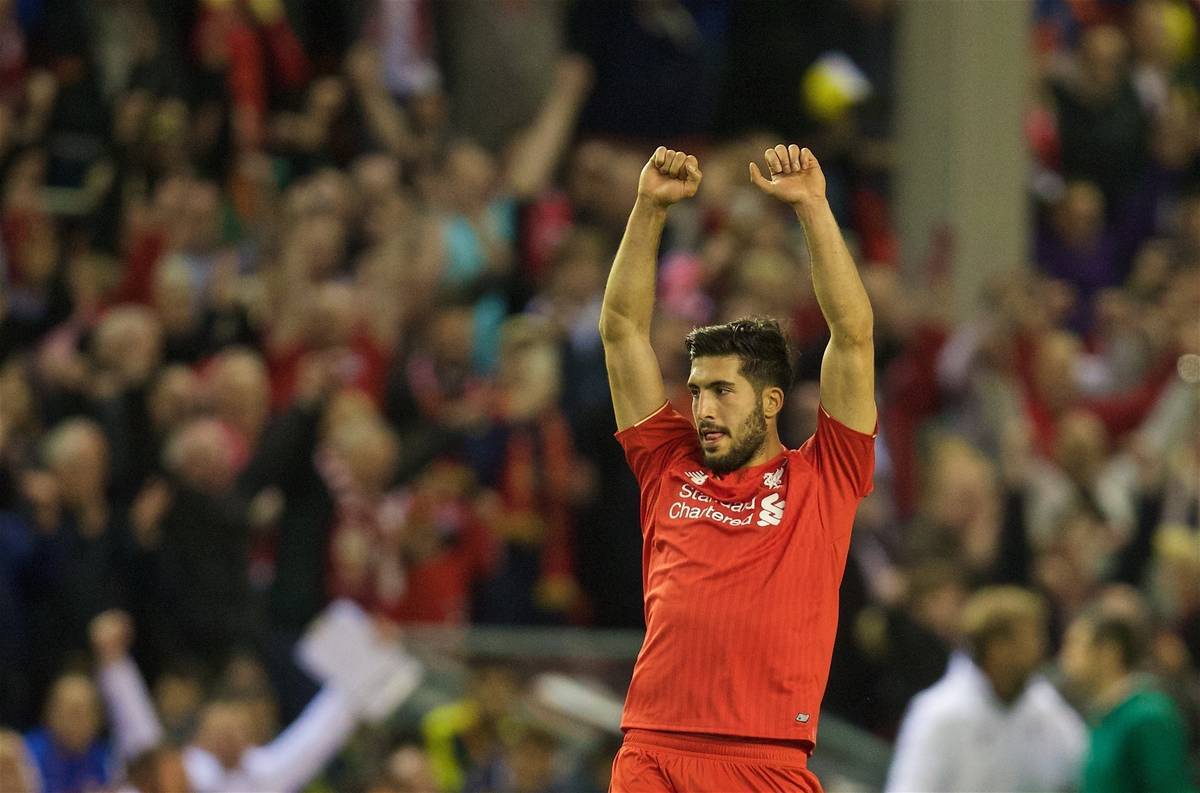 Emre Can was thrown straight back into the Liverpool side for Thursday’s Europa League semi-final victory over Villarreal, but he looked like he’d never been away.

When Can limped off late in the 4-3 win at home to Borussia Dortmund last month, his season looked over.

But he recovered miraculously from the ankle problem picked up, returning to full training at the start of the week.

“Every day I spent seven to eight hours at Melwood to get fit for this game and I’m so happy that I could play in it,” he explained.

Jurgen Klopp is not an easy man to second guess, and just when most supporters expected Can to be eased back in and named on the substitutes’ bench against Villarreal, he was given a surprise start.

It says a lot about how highly Klopp rates his German compatriot and also about Can’s dedication and mental resolve.

Klopp’s faith in Can was rewarded with a superb 90 minutes.

Performance for the ages The 22-year-old was magnificent on the big occasion, as he was against Dortmund, and outlined why he is now far and away the best midfielder at the club.

His season has been increasingly impressive as the months have passed, and this all-conquering display was the pinnacle of his campaign to date.

With James Milner given license to wander by Klopp, there were times when Can seemed to be doing the work of two men, yet he still got the better of Villarreal’s beleaguered midfield.

His early burst through the middle of the pitch played a key role in Liverpool’s opener and it was very much a sign of things to come.

Villarreal simply couldn’t deal with Can’s pace, power and relentless energy, and the defensive side of his game was also impressive. The term ‘engine room’ is often used for the midfield, and Can was like a locomotion steam engine. His defensive side is an area of his play that has been questioned in the past, with some claiming he lacks the discipline to sit deep and not go roaming, but that has improved under Klopp’s tutelage.

No Reds player made more interceptions (4) in Thursday’s battering of the Yellow Submarine, with only Adam Lallana winning as many aerial battles (3).

The fitness Can showed to go the whole 90 minutes at full tilt was quite remarkable, given his recent lay-off, and it is testament to how hard he has worked.

It wasn’t too long ago that he was being criticised for looking a little on the heavy side, and he didn’t appear to have the engine he now does.

Liverpool produced an almost perfect team display on Thursday evening, but there were individuals who shone all over the pitch.

For all the grit and determination of Dejan Lovren, the influence of Milner and effortless class of Roberto Firmino, it was Can who arguably stood out more than anyone on a famous Anfield night.

Of all the players in this current Reds squad, there is arguably nobody who looks a more exciting long-term prospect than Can.

Firmino is magical on his day, and will only improve, Philippe Coutinho is a wonderful player and Daniel Sturridge is world-class when fit, but Can looks an absolute Rolls Royce of a footballer.

There are echoes of a young Steven Gerrard about him, which says all you need to know about the talent and potential he has.

The former Bayen Munich man has a fiery edge that can often prove to be a special attribute in a young player, but there is also a calmness about him that has appeared of late.

He can pass, tackle, shoot, beat players, out-run and out-muscle opponents and, almost most importantly, he looks like a natural leader.

While Jordan Henderson has struggled a little with the burden of the Liverpool captaincy, there is a feeling that, like the young Gerrard back in 2003, Can would only grow further in stature in the role.

Klopp is not afraid to make big decisions, and there must be a part of him that is considering giving Can the armband next season.

At 22, Can is still years from reaching the peak of his powers, and barring a serious injury, it seems impossible not to see him mature into one of the world’s top midfielders.

There is barely a weakness to his game – he could score more goals, perhaps, but that is far from essential in his current role – and he never looks remotely daunted by anything that comes his way.

This was perfectly highlighted by his majestic showing against Villarreal, with Can’s all-round brilliance helping inspire Liverpool to a first European final in nine years.

Football fans are always guilty of over-hyping players, particularly when the adrenaline of a big win has not yet left the veins, but Can is the real deal.

He can reach huge heights in the coming years, and the major hope is that we see him blossom into one of the world’s best while in a Liverpool shirt.