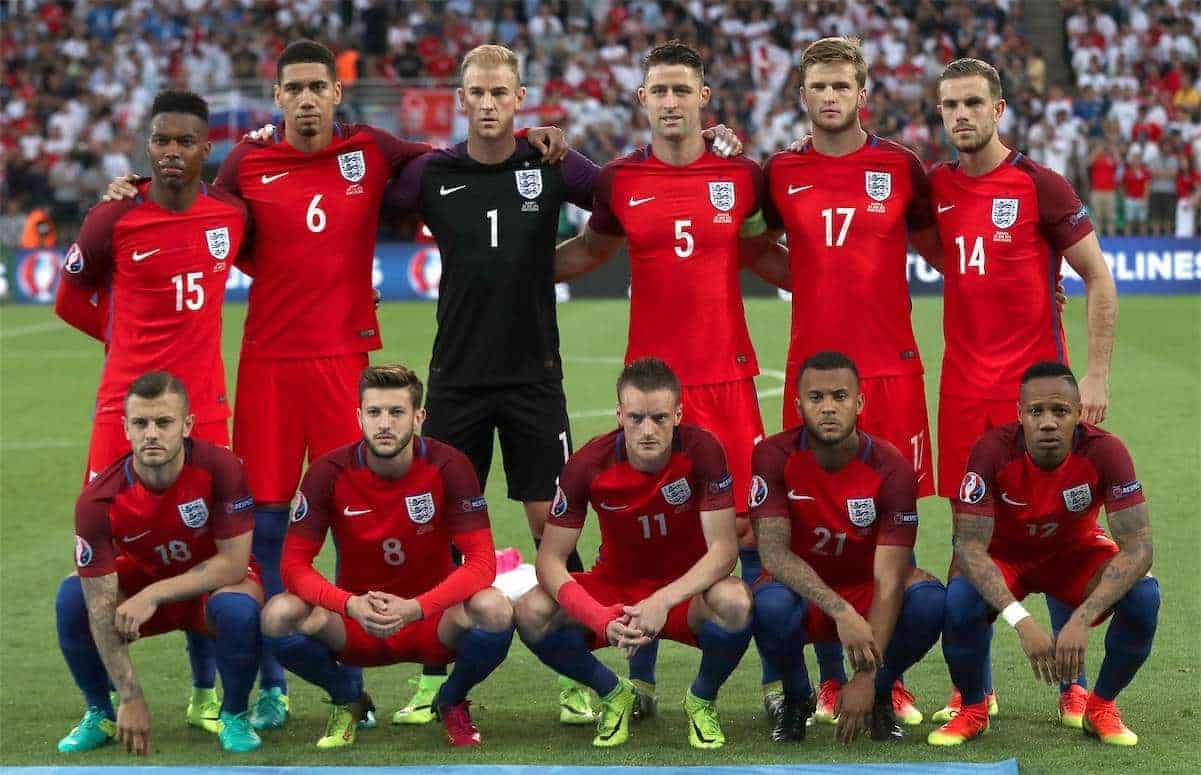 Six Reds feature as England and Wales progress at Euro 2016

Six Liverpool players featured as the home nations progressed to the last 16 at Euro 2016, with England drawing 0-0 with Slovakia and Wales beating Russia 3-0.

The Three Lions arrived in Saint Ettiene needing just a point to guarantee qualification for the knockout stage, and Roy Hodgson’s side earned it with a dominant display despite playing out a goalless draw.

Substitute Dele Alli came closest to breaking the deadlock, seeing his effort cleared off the line, while Jamie Vardy and Liverpool striker Daniel Sturridge also had good chances to seal a win in the second period.

Slovakia posed little threat in the game, but nearly went ahead when a mix up with Chris Smalling and Joe Hart allowed Robert Mak to nip in at close range, but the Slovakian winger couldn’t quite tap home.

It was a strong overall display from Hodgson’s side – especially before substitutes arrived and derailed England’s impressive fluidity in the second period – and one that proved enough to seal progression.

With Hodgson making six changes to his team, Nathaniel Clyne, Jordan Henderson, Adam Lallana and Sturridge all started in the stalemate, with all but Lallana making their maiden starts in the competition.

James Milner, watched from the bench for the duration for the second game in a row, meanwhile Martin Skrtel captained Slovakia in the make-or-break clash at Stade Geoffroy-Guichard.

Lallana played 60 minutes of the game, replaced on the hour mark by Spurs youngster Alli, with Sturridge also being substituted 15 minutes from time for Tottenham’s Harry Kane.

Meanwhile, Clyne and Henderson both completed the full game on their first outings, getting a much needed 90 minutes under their belts.

The Reds’ starting quartet all produced impressive performances, with Clyne and Henderson linking up well down the right side – particularly in the first-half – and Lallana and Sturridge doing the same in the final third.

Skrtel continued as an ever-present at the heart of defence with his side clearly happy to settle for a point, and the Reds defender enjoyed a good evening, throwing his body on the line and making some important blocks, including clearing off the line from Alli.

Ending the group in third place behind England with four points, Skrtel’s side now face an anxious wait to discover whether they have done enough to join Hodgson’s men in progressing to the last 16. Elsewhere in Group B, Joe Allen featured for Wales as they progressed with England for the last 16 stage with a comprehensive 3-0 win over Russia.

Goals from Aaron Ramsey, Neil Taylor and Gareth Bale guided Chris Coleman’s side to the great achievement of topping the table with six points from their three games.

Allen played a crucial role in the convincing victory and once again impressed in his usual central-midfield role orchestrating play, as Wales bounced back perfectly to a gutting last-minute defeat to England.

The Reds midfielder claimed a superb assist for Ramsey’s opener, Cruyff turning with his first touch, before displaying fantastic vision and execution with a defence splitting pass to release the Arsenal man who finished brilliantly.

With his side 3-0 up, Allen was given a well-earned rest, being replaced by Dave Edwards for the final 15 minutes in Toulouse.

Like Milner, young goalkeeper Danny Ward watched from the bench for the duration on a productive evening for the home nations.