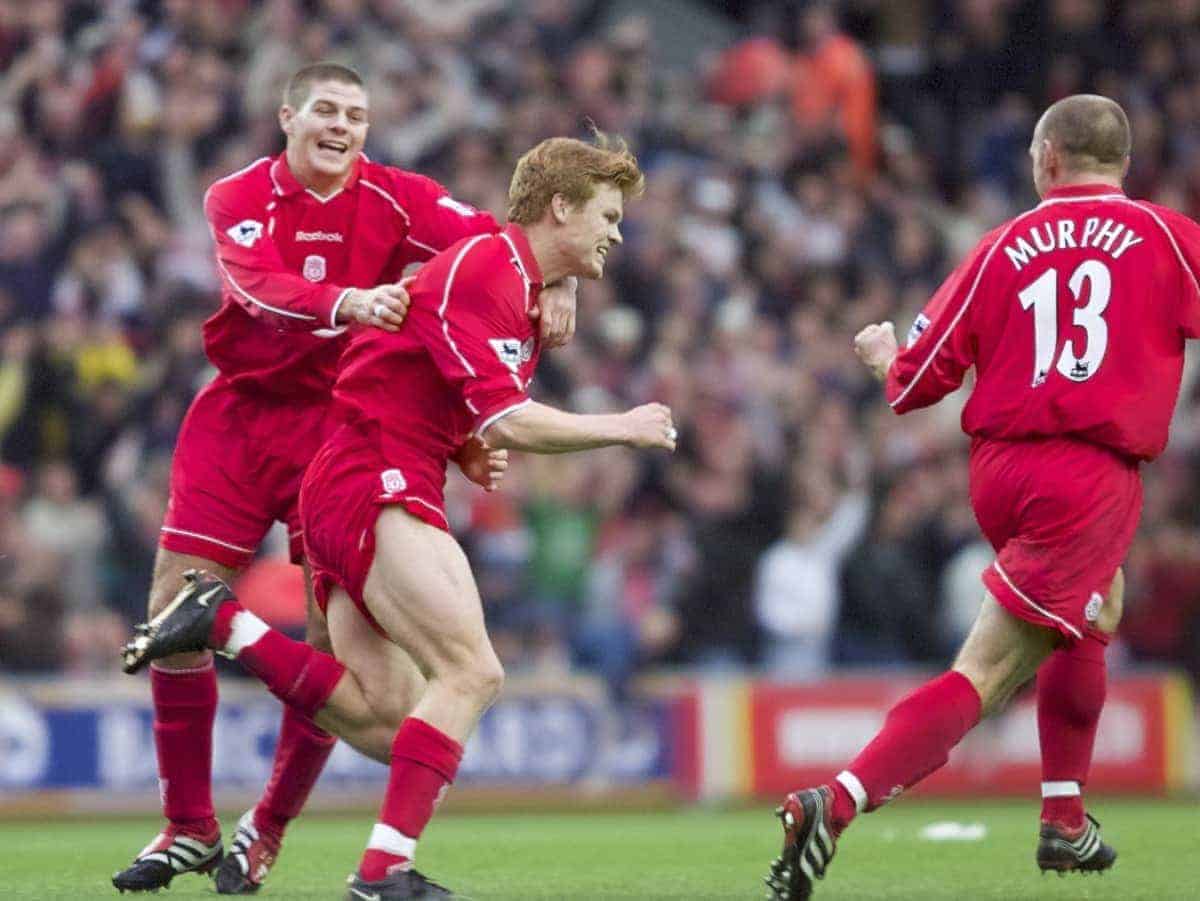 In the latest of our summer trips down memory lane, we recall Liverpool’s 2001/02 season. The Reds achieved their best Premier League finish at the time, but missed out on top spot in a season of drama on and off the pitch.

They may not have had the fluency and goals of Brendan Rodgers’ side, nor the world-class array of talent that Rafa Benitez had at his disposal, but Gerard Houllier’s outfit were a force to be reckoned with.

Having won an incredible cup treble in 2000/01, as well as qualifying for the Champions League for the first time, the Reds looked primed for an assault on the Premier League title the following year.

What followed was an extremely impressive campaign, but one that saw Liverpool finish runners up to an impressive Arsenal side.

No major additions were made prior to the start of 2001/02, with Houllier clearly content with the squad he had built.

Goalkeepers Jerzy Dudek and Chris Kirkland were added though, from Feyenoord and Coventry City, respectively, while left-back John Arne Riise arrived from Monaco for £4 million.

Young striker Milan Baros was the only other arrival – he wouldn’t arrive until halfway through the season. Christian Ziege left for Tottenham.

From back to front, it was an extremely well-drilled Liverpool side – one that was built on solid foundations and a good mix of attacking options.

Sander Westerveld would start the campaign as first-choice ‘keeper – that would change fairly quickly – while a back-four of Jamie Carragher, Stephane Henchoz, Sami Hyypia and Riise looked well balanced.

Sadly, we had already seen the best of Markus Babbel, who discovered he had contracted Guillain-Barre syndrome in August 2001, and therefore managed just six appearances in 2001/02.

Although there may have been a distinct lack of width in midfield, there was a tremendous mix of youth, experience, tactical discipline and attacking thrust in central areas.

Didi Hamann, Steven Gerrard and Danny Murphy were key players, while the likes of Gary McAllister, Vladimir Smicer and Patrik Berger all featured prominently as well.

Jamie Redknapp’s injury woes continued, and his final game for the club would come in October 2001, in a 2-0 win against Borussia Dortmund in the Champions League at Anfield.

Michael Owen and Emile Heskey were the undisputed first-choice pairing in attack, with their partnership one of the most effective in the Premier League – plundering 40 goals in all competitions between them – six less than the treble campaign before.

Robbie Fowler and Jari Litmanen were also options up front. Fowler’s legendary spell at Anfield would come to its conclusion in November, when he joined Leeds United after a fallout with assistant Phil Thompson. Alex Ferguson’s Man United were in and around the peak of their powers at this point and, having won three Premier League titles on the bounce, they were the naturally favourites to lift the trophy again.

Arsenal were also a fantastic team, with the likes of Thierry Henry, Dennis Bergkamp, Robert Pires and Patrick Vieira making them one of the countries most feared outfits.

David O’Leary’s Leeds side were one of the most exciting young teams in Europe, with Harry Kewell the star of a side also containing Rio Ferdinand, Lee Bowyer and Alan Smith.

Liverpool were right in the mix, though, and following their treble exploits the previous year, big things were expected.

Victories over Man United and Bayern Munich, in the Charity Shield and Super Cup, got the campaign off to a positive start, and an Owen double inspired the Reds to a 2-1 win at home to West Ham in their opening Premier League fixture.

A 2-1 loss at Bolton Wanderers followed, however, with Westerveld’s late error effectively ending his Liverpool career. It was his last appearance for the club, and he was sold to Real Sociedad at the end of the year.

A sobering 3-1 home defeat at the hands of Aston Villa was not what the doctor ordered, and Gerrard’s sending off certainly didn’t help matters.

Following this surprise early slump, the Reds then went on an impressive run of form in the league, remaining unbeaten until mid-December.

3-1 wins against both Everton and Man United, in which Gerrard and Riise both scored sensational goals, stood out during that run.

Riise’s free-kick against United remains one of Liverpool’s best ever Premier League goals.

Although back-to-back losses to Chelsea and 10-man Arsenal were a setback just before Christmas, Liverpool were still well-set heading into the New Year.

They had also qualified for the second group stage of the Champions League, as was the format back then, but were out of the League Cup, having lost at home to First Division Grimsby Town.

Perhaps the biggest story of Liverpool’s season lay away from what happened on the pitch.

At half-time in their 1-1 draw with Leeds in October, Houllier complained of feeling unwell, and he was rushed to hospital.

It was discovered that the Frenchman had a heart condition knows as aortic dissection and he underwent life-saving heart surgery immediately.

The news came as an almighty shock to everyone associated with the club, and during a five-month absence, assistant manager Thompson took charge.

The Liverpool legend did an excellent job in his first couple of months as manager, as highlighted by the Reds’ league position at the turn of the year.

Indeed, the only teams to beat Liverpool during Thompson’s time in charge were Barcelona, Chelsea, Arsenal (twice, once in the FA Cup), and Southampton.

By Christmas, Newcastle led the way on 36 points – Bobby Robson’s team were another very talented outfit – and Arsenal were second ahead of Liverpool on goal difference, on 33.

Baros and new signing Nicolas Anelka were unveiled just before Christmas – Abel Xavier would also join from Everton at the end of January – with Anelka someone with genuine pedigree at the top level.

Many felt the Frenchman’s goals would help hugely in their quest for a first league title since 1990, and although he wasn’t a huge success, he still brought undoubted quality to a squad now without Fowler.

A run of four league games without a win was a poor start to 2002, with Riise’s disastrous own goal in a 2-0 defeat at Southampton a particular low point.

The Reds faced United at Old Trafford in late January, knowing a win was crucial in terms of getting back on track, and Murphy’s dramatic late winner secured a vital 1-0 victory.

United had been struggling to find top gear all season, but any victory away to the Reds’ biggest rivals was to be celebrated.

That win resurrected Liverpool’s season, and they got on a fantastic run of form, losing just once more in the league until the end of the season.

Thompson’s team won 12 out of 13 games, including 4-0 and 6-0 victories at Leeds and Ipswich Town, and a crucial 1-0 win at home to Chelsea in March. Smicer’s superb last-gasp volley was a moment to treasure.

In most other seasons, such a relentless run of form would have seen Liverpool win the title, but up against them were an Arsenal side equally as inspired.

The Gunners didn’t lose any of their last 21 league games, and quite remarkably, they won their last 13 in a row. Freddie Ljungberg was an absolute pain in the neck to the Reds, with the Swede constantly scoring key winning goals.

In the end, the Merseysiders had to settle for second place, finishing seven points behind Arsenal. But they had finished ahead of United for the first time in the Premier League era and recorded their highest points total (80) since 1988.

The Reds had done themselves proud, and had it not been for one of the best ever winning streaks in English football history, they may well have been crowned champions.

In the Champions League, a 4-2 defeat to Bayer Leverkusen in the quarter-final second-leg saw Liverpool knocked out in depressing fashion, denying the Reds a semi-final showdown with United.

This is where Houllier’s infamous “10 games from greatness” quote unravelled, with the Reds on the verge of Champions League and Premier League going into the second-leg in Germany. A decision to bring on Smicer to replace Hamann with half an hour to go saw Liverpool concede three goals to the Michael Ballack-inspired Germans, and Houllier’s prophecy was ripped up. Arsenal proved to be their scourge in the FA Cup as well, with Bergkamp’s solitary goal sealing a 1-0 win at Highbury in the fourth round. The Dutchman was also sent-off, along with Martin Keown and Carragher – the latter for famously throwing a coin back at the Arsenal fans.

It really was a campaign full of drama. The summer of 2002 was effectively the one that ruined Liverpool chances of being a force again during the Houllier era.

Whether or not his bad health played a part is up for debate, but he didn’t appear to be quite the same manager as he once was.

A dreadful summer in the transfer market saw £10 million spent on the loathsome El Hadji Diouf, instead of keeping Anelka, and further funds were wasted on Bruno Cheyrou and Salif Diao.

All three will forever be mentioned in ‘Worst Liverpool Signings’ lists, and they ensured the Reds went backwards in 2002/03.

Liverpool had to settle for a fifth-place finish, losing to Chelsea in a make-or-break game for Champions League football on the final day, and they failed to get past the group stages in the Champions League.

A 2-0 League Cup final victory in Cardiff against United was the season highlight.

Houllier only lasted one more season on Merseyside, before being replaced by Benitez, and it brought to an end nearly six good years at the club.

He should forever be lauded for that magnificent 2000/01 campaign, and for almost winning the league a year later, but he blew the big chance to take Liverpool to the next level in 2002.

Benitez did the same in 2009, and Rodgers then repeated the error in 2014, so at least Houllier isn’t alone in that respect. 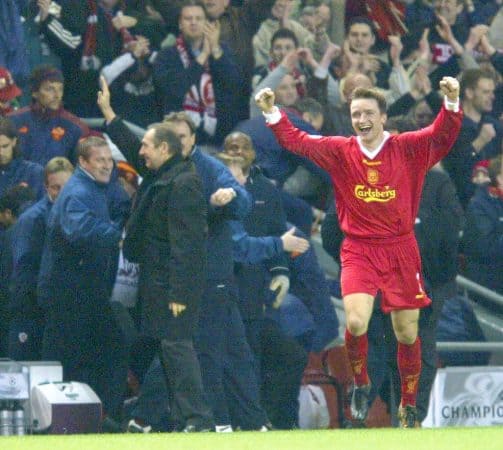