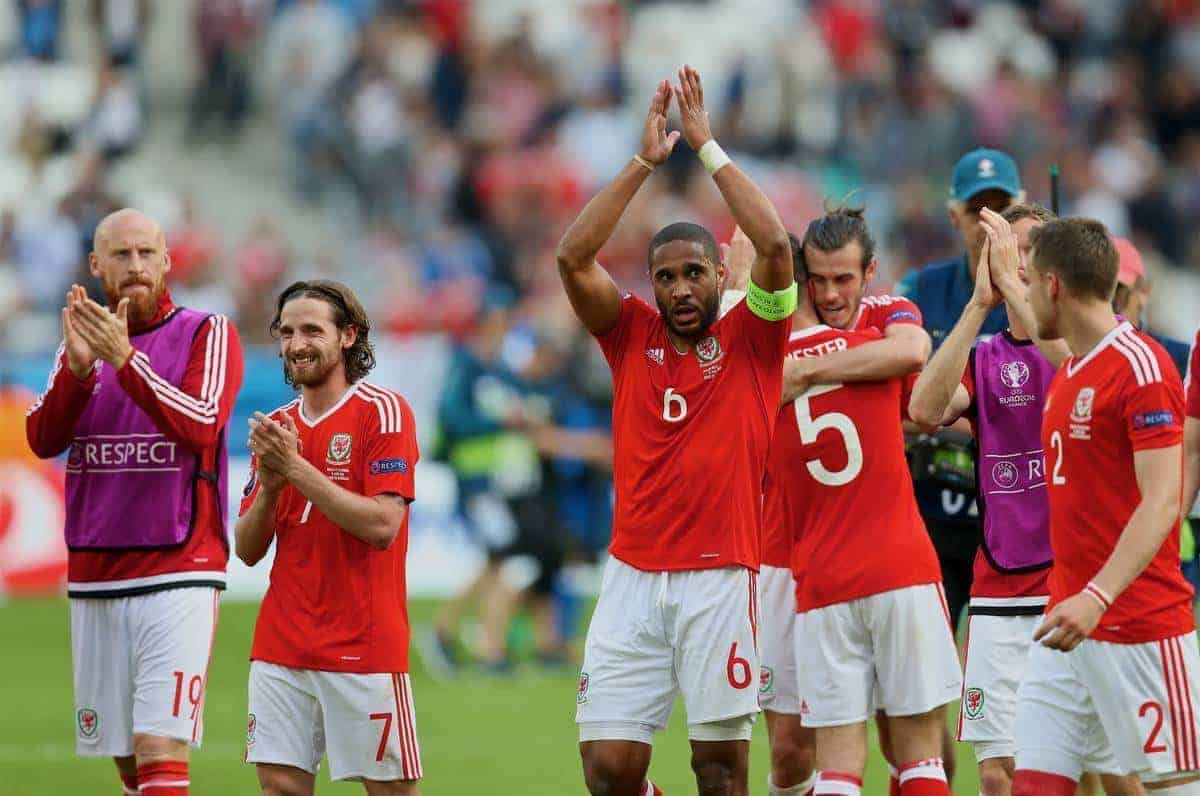 Goals from Gareth Bale and Hal Robson-Kanu gave Wales a memorable win in their opening game of the 2016 European Championships, with three Liverpool players getting a full ninety minutes for their country.

Joe Allen and Martin Skrtel were expected to play a part, but a late injury for Wales’ No.1 Wayne Hennessey meant Danny Ward got his first international start on the biggest stage.

Allen and Skrtel’s Liverpool futures both appear to be in the balance going into the summer transfer window, and an international tournament such as this can have a big say on who goes, and for how much.

31-year-old centre back Martin Skrtel continuously walked a fine line between being proactive and giving away needless fouls.

He could easily have given away a penalty when, instead of ushering a ball out of play, he decided to elbow Jonny Williams in the neck.

It was an inexplicable piece of “defending”, and if the extra official behind the goal hadn’t bottled it, it would have been a penalty to Wales and at least a yellow card.

It’s the type of clumsy, unnecessarily physical defending which Premier League fans have become used to from Skrtel, and this type of play is part of the reason he was Liverpool’s fourth choice centre back by the end of last season.

His first half was poor, but his second half showing may have been worse.

A block on Gareth Bale later in the game, when he wasn’t even looking at the ball, would have been given as a free kick for obstruction if it wasn’t in the area. Another let off.

Then Wales’ winning goal came as Skrtel failed to capitalise on a poor touch from Aaron Ramsey. He backed off the Arsenal man instead of going in to win the ball, and was punished as it was squared to Hal Robson-Kanu to scuff a shot into the goal.

A yellow card for a reckless sliding tackle later in the game summed up his performance, as he squared up to Neil Taylor in an attempt to assert the kind of authority he no longer possesses as a footballer.

His performance today wouldn’t have done anything to convince Liverpool staff or fans that he has a future at the club, but it might also mean that few clubs are interested in signing the defender who still has two years left on his contract.

Wales’ usual starter between the posts, Crystal Palace‘s Hennessey, suffered back spasms in the build up to the game which meant Liverpool’s backup goalkeeper Ward made his first start for his country. It was just his third appearance for Wales, and to make his first start in such an important game cannot be underestimated. It was a massive occasion for the Wrexham born goalie.

He was involved in the action from the start, and his goal was troubled with less than five minutes gone.

Marek Hamsik jinked his way through the Welsh defence and managed to get his shot past Ward, but it was cleared off the line brilliantly by a recovering Ben Davies.

The clearance made a big difference to the game, and meant that Ward didn’t have his confidence knocked by conceding an early goal.

He did eventually concede on the hour mark when a run from Robert Mac set up substitute Ondrej Duda. His shot through the a couple of defenders left Ward with little chance of getting to the ball as it skipped into the bottom corner.

Shortly after, he spilled Juraj Kucka’s long shot and it had to be cleared by James Chester, but there was no impending danger from the Slovakian attackers.

Overall, Ward didn’t do much wrong, and while at times he could have been more convincing with his actions, he was generally good at claiming high balls, communicated well once he settled, and showed a willingness to punch crosses clear when under pressure.

Joe Allen operated as the deepest of the Welsh midfielders, with David Edwards slightly ahead of him to the right, and Aaron Ramsey pushed much further forward.

They were joined by the wing-backs on the flanks, with Joe Ledley entering the fray later on to provide further buttress in the middle when the side were under the cosh.

Allen also had the support of a back three behind him, which proved helpful on the occasions he was bypassed by the Slovakian midfield.

But Allen’s main job was to link the play between the defence and attack, and he did this well, also managing to burst forward on the odd occasion which is something he’s added to his game in recent times.

He had an early chance when the ball fell to him from a set piece, but there were a throng of bodies in the box which prevented any decent chance to score.

It was Allen’s chipped cross from the byline which saw Bale test the Slovakian keeper Matus Kozacik with a header, but the shot was saved.

He continued to knit the play together, running hard between both boxes for the full ninety.

His showing was the best of the Liverpool players on the field today, and if the rumours that he might leave the club this summer are true, then a couple more performances like this will add several millions to his value.

But if he does continue in this vein, building on good form towards the end of last season, then Liverpool fans won’t want him to leave.