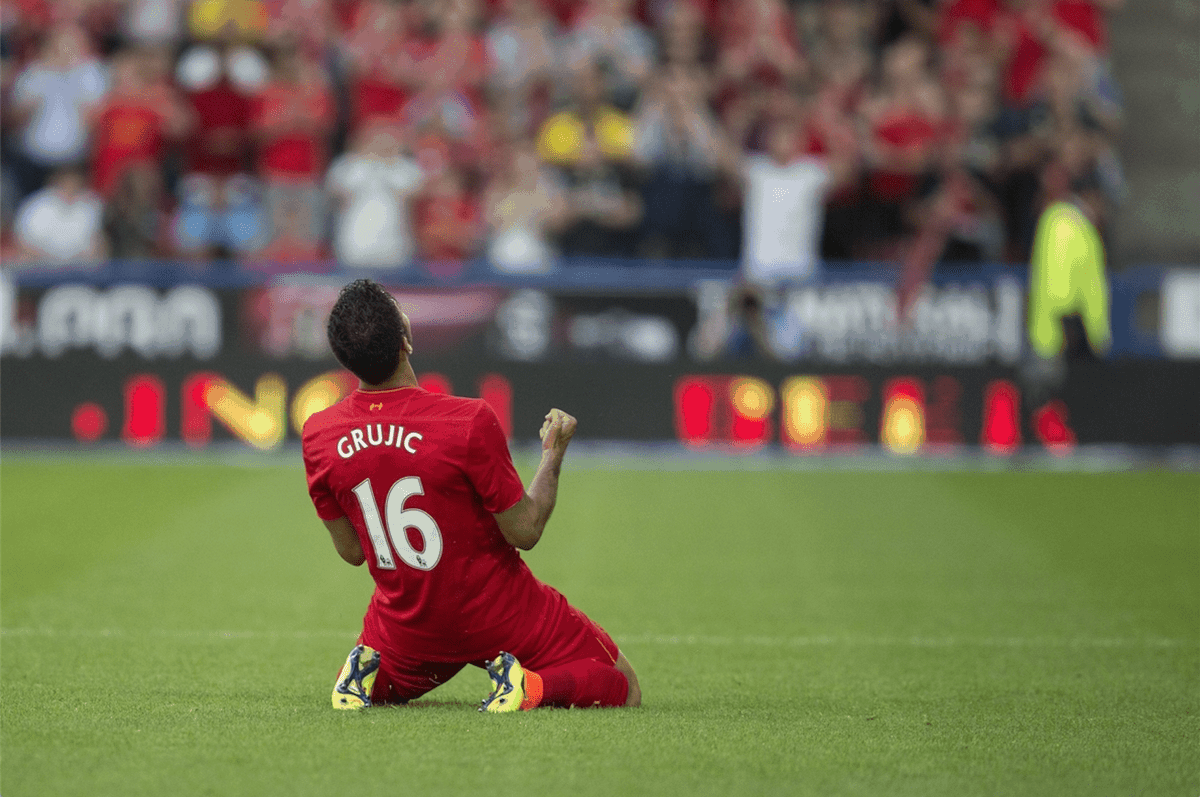 Liverpool sealed a 2-0 victory away to Huddersfield Town on Wednesday night, producing a number of talking points as pre-season continues.

The Reds’ trip to the John Smith’s Stadium was their last before travelling to the US to take part in the International Champions Cup, with Klopp facing off against a close friend.

But despite David Wagner’s Terriers putting up a strong challenge for the away side, goals from Marko Grujic and Alberto Moreno sealed a fourth consecutive win for Liverpool.

There was also a strike wrongly ruled out for Sadio Mane, as well as a disappointing penalty miss from Philippe Coutinho.

Klopp and his squad now travel to California ahead of friendlies against Chelsea, AC Milan and AS Roma, with plenty of food for thought for the Reds manager on the flight over.

Here are five talking points from the Reds’ 2-0 victory over Huddersfield.

Lovren Will Play on Liverpool’s Right Side Whenever possible so far this pre-season, Dejan Lovren has lined up on the right-hand side of Klopp’s centre-back pairing, and this continued despite injury to Joel Matip on Wednesday.

Lovren was partnered by Lucas Leiva in West Yorkshire, and highlighted his likely role under Klopp in 2016/17.

“He will bring us really good qualities with his defensive intelligence and ability on the ball and he is a left-footed player so will give us extra balance,” Klopp said of new centre-back signing Ragnar Klavan on Wednesday afternoon, underlining the roles in his defence.

Though Matip, Mamadou Sakho and Joe Gomez are all out injured at present, it seems likely that Klopp will call upon Matip and Lovren as his right-sided options, with Sakho and Klavan on the left.

Gomez, whose versatility can prove invaluable, could therefore spend 2016/17 as Klopp’s utility man.

Lucas shifted into a midfield role after half-time, with Andre Wisdom joining Lovren in defence, but it wasn’t long before the Brazilian’s night was over.

Pulling up with a frustrating hamstring injury, Lucas was forced off the field for immediate treatment, which means he’s most likely played his final game for the club.

The 29-year-old has been linked with a move to join Turkish Super Lig side Galatasaray this summer, but any serious injury could scupper Klopp’s plans to move his veteran midfielder on.

Having accepted a £13 million offer for Lucas’ midfield colleague, Joe Allen, Klopp’s options are looking thin at this stage.

The severity of Lucas’ injury remains to be seen, but Klopp will be relishing the return of James Milner and Jordan Henderson, who will both line up for the Reds in the US. Milner was already back training at Melwood on Wednesday. Making just his second appearance for the club since his £5.1 million move from Red Star Belgrade, Grujic once again showcased his potential as a top-level midfielder.

After a barnstorming display away to Fleetwood Town in Liverpool’s second pre-season clash of the summer, Grujic missed Sunday’s trip to Wigan Athletic with illness.

But the 20-year-old showed no signs of fatigue at the John Smith’s Stadium, dominating the midfield battle with composure and physicality.

Arriving on the edge of the penalty area to collect Roberto Firmino‘s cross midway through the first half, Grujic once again underlined his goalscoring presence, adding to his strike at Highbury Stadium with a half-volleyed finish.

Though his performances so far have come against League One and Championship opposition, Grujic is certainly showing signs he is capable of turning out in the Premier League in 2016/17. Throughout Klopp’s first season with the club, a lack of pace in Liverpool’s forward ranks—Divock Origi aside—proved costly, with the Reds unable to realise the German’s direct attacking vision.

But the £30 million signing of Mane from Southampton this summer has injected a relentless speed to Klopp’s attack, and the 24-year-old proved this against the Terriers.

The lost causes of 2015/16 are no longer lost causes for Liverpool, with Mane able to chase down loose balls and catch ambling defenders off guard.

It was Mane’s pace that saw him latch onto a sloppy backpass in the first half, beating Huddersfield goalkeeper Joel Coleman to the ball and stabbing it home.

The linesman ruled his effort out for a foul, but replays indicated that his fleet of foot conjured a legitimate goal for the Reds—which Klopp will hope to see more of when it counts.

Firmino a Regular Option Up Front That Firmino has been regularly utilised as Klopp’s No. 9 throughout pre-season so far, despite Danny Ings‘ availability, suggests the former Hoffenheim star is a viable option up front this season.

Deputising in this focal role in 2015/16, Firmino scored six goals and laid on a further five in 11 appearances, highlighting his value.

Though he is likely to revert to his natural role behind the striker when Origi and Daniel Sturridge are available, his appearances throughout pre-season indicate he is now third choice.

Ings’ industry, technical quality and intelligent movement will prove useful throughout 2016/17, but the 23-year-old looks set to play a squad role.

And after Shamal George’s bright cameo up front on Wednesday night, he may drop down even further…