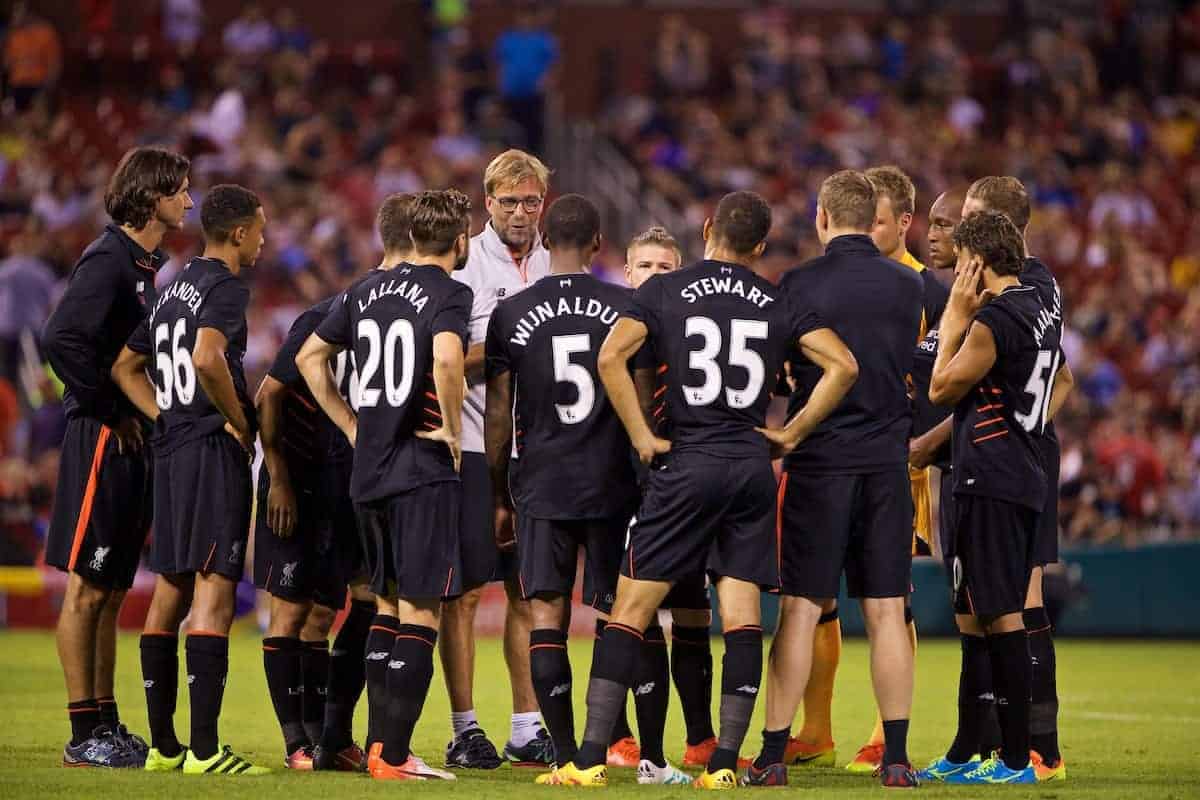 Liverpool’s gruelling tour of America is now over, and despite losing two of their three matches, there were plenty of positives to take.

The Reds were beaten 2-1 by Roma at Busch Stadium in St Louis in the early hours of Tuesday morning—just their second defeat in seven pre-season games this summer.

Sheyi Ojo‘s first-half header was sandwiched by goals from Edin Dzeko and Mohamed Salah, and Liverpool’s players ran out of steam in the latter stages.

Despite the result, it was another night when Jurgen Klopp will have gained plenty of information about his players, ahead of Liverpool’s Premier League opener at Arsenal a week on Sunday.

These 12 days in the US have been intriguing, and here we select 10 things we’ve learned from the tour. Prior to pre-season, Klopp made a point of saying he was not particularly interested in whether the Reds won their summer matches or not.

Instead, he wanted his players to reach their optimum level of fitness, and start to work cohesively as a unit together.

The squad will benefit hugely from what was a rigorous schedule in searing heat, and Klopp’s quest to make Liverpool the Premier League‘s fittest team is in full swing.

Of course, it’s always nice to see the Reds win games, rather than lose, but in the grand scheme of things, the results will mean very little. The signing of Ragnar Klavan from Augsburg wasn’t exactly one to get Liverpool supporters jumping for joy.

The Estonian has fitted into the team seamlessly, though, combining a cultured left foot with a no-nonsense style of play at the heart of the defence.

With Joel Matip and Mamadou Sakho looking unlikely to start against Arsenal, Klavan will likely feature alongside Dejan Lovren at the Emirates.

While there may have been fears about that a few weeks ago, the 30-year-old’s performances have shown he is more than capable of stepping up to the plate. While many transfers drag out over many weeks and months, Georginio Wijnaldum joined Liverpool very soon after rumours of his Newcastle exit emerged.

Known for his versatility, supporters wondered where the Dutchman would feature under Klopp—central midfield, a No. 10 role or slightly wide?

It proved to be the former in the US, both in a 4-2-3-1 and 4-3-3 formation, with Wijnaldum displaying his box-to-box ability against AC Milan and Roma.

He looked less effective in a two-man midfield against Roma, but it is easy to see him thriving alongside Emre Can and Jordan Henderson in a three.

Surely The End For Benteke

It became apparent throughout last season that Christian Benteke was not a favourite of Klopp’s, and he had to make do with a bit-part role.

If anyone had any doubts about whether he would leave Anfield or not this summer, the tour of the States has surely shown his future lies away from Merseyside.

The Belgian didn’t play a single minute, which says all you need to know about where he stands in the strikers’ pecking order.

Crystal Palace and West Ham United are both interested in signing Benteke, and his disappointing spell at Liverpool is nearing its conclusion.

Youngsters Have A Part To Play

Although a lack of European football in 2016/17 means Klopp does not need a giant squad, fringe players will still get their chance to shine.

This most certainly applies to a number of youngsters, who have done their first-team chances no harm across the Atlantic.

The likes of Ojo, Trent Alexander-Arnold, Ovie Ejaria and Cameron Brannagan have played with maturity and confidence, and Klopp won’t want to phase them out completely.

Competitions such as the FA Cup and League Cup will allow the Liverpool manager to rest key men, and that is when the young players will be able to seize their opportunity.

Origi Close To Being First Choice

The 2015/16 campaign showed that Klopp thinks highly of Divock Origi, with the 21-year-old preferred to Daniel Sturridge on occasions.

Anyone who thought that may be a short-term decision could well be wrong, though, and Origi’s expertly taken strike against AC Milan outlined his quality.

Sturridge, meanwhile, looked a little rusty at times, and there is absolutely no guarantee that he is first choice moving forward.

He is the superior footballer, without question, but does he suit Klopp’s style as much as Origi?

A Defensive Midfielder Is Needed

Klopp is gradually building a strong squad this summer, but he is still crying out for a new holding midfielder to come in—and a left-back, obviously.

For all of Can, Henderson and Wijnaldum’s enduring qualities, none are naturally defensive-minded, and it showed at times in America.

Too often, opposition players found gaps in between the Liverpool defence and midfield, and it looked a little too easy to run through them.

Lucas Leiva looks set to depart for Turkey, and is not the solution anyway, but signing someone who is content to just sit and do the dirty work is crucial.

They don’t have to be a regular, necessarily, but a proper defensive midfielder is paramount in certain match situations.

Mane Will Be Key There wasn’t universal optimism when Liverpool brought in Sadio Mane from Southampton, but he impressed in the early pre-season games back in England.

The Senegal international was also one of the Reds’ liveliest players in the US, despite not always setting the game alight, and it is clear he brings something completely different to the team.

His pace is devastating, and his ability to run in behind the defence is perfect for the creative brilliance of Philippe Coutinho, Roberto Firmino and others.

It feels as though Mane could be a little erratic and inconsistent at times, but he is going to be a very important player for Klopp in 2016/17. Second-guessing Klopp is one of the hardest things in football, but it looks as though he will ditch his favoured 4-2-3-1 formation for a 4-3-3 at the start of the season.

As he has pointed out, though, he is unlikely to stick with one system throughout the campaign.

Playing a three-man midfield gives the team more balance and defensive cover, and gets the most out of Henderson and Wijnaldum.

It will make for a huge battle for places in the attacking third, however, with Ojo, Coutinho, Firmino, Mane, Origi, Sturridge, Adam Lallana and Danny Ings all in the mix.

Competition within the squad can only be a good thing.

While the positives have outweighed the negatives in America over this last fortnight or so, certain shortcomings have still reared their ugly head.

Some of the finishing has been disappointing—a lack of ruthlessness was a major issue last season—and there have been frailties at the back too.

Liverpool’s ability to defend set-pieces has once again looked shaky, while Alberto Moreno continues to be an erratic presence at left-back.

These are things Klopp must work on improving between now and the start of what we hope is a memorable Premier League season.