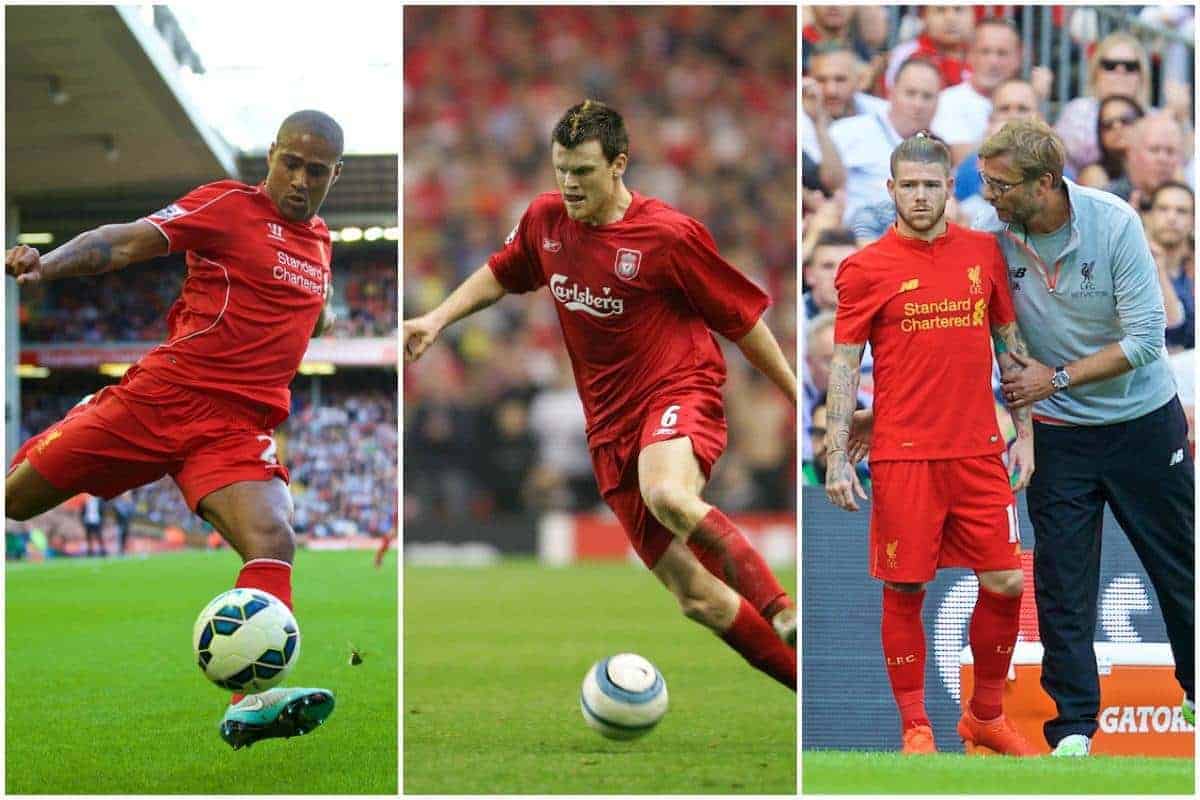 Alberto Moreno is the latest in a long line of full backs to be derided at Anfield, but has the position changed so much that full backs will always be exposed to criticism?

A free-kick awarded 30 yards from goal.

“Don’t let him take it” I implore.

“Anyone other than him”. I add.

A bewildered and slightly annoyed man stood in front of me spins around. “Give him a chance will yer”? he growls.

“The ball will be rolled across his body towards his left foot and then he’ll hit the wall with it” I confidently reply.

“Behave” being the quizzical response I’m given.

Sure enough, the ball is rolled to the left and it is blasted into the Celtic defensive wall.

“For fucks sake Riise” I remonstrate.

Growling man in front of me spins around again and admits; “You called it right”.

A phrase is born, one which gains momentum and is aired on a regular basis for the next five years by more than just me alone.

Enter the world of the polarising opinion of the full back. Nothing is new in football. Slagging off full backs has been unfair game for well over a decade now.

Alberto Moreno is the John Arne Riise of 2016.

Actually the slagging off of full backs has been an age-old game. My dad had nothing much down for Joey Jones, while if we’re being quite honest about it, Alan Kennedy was a bit awkward defensively.

The role of the full back has changed dramatically, and particularly since the turn of the millennium. You only used to get two classifications of full back. If you weren’t a defensive full back, one who steadfastly refused to (or was even instructed to) never cross the halfway line, then you were an ‘overlapping fullback’.

Overlapping fullbacks tended to chip in with a goal or two here and there, while your defensive full back would be less of an attacking option than a centre back would be.

Added cameo roles as regular penalty ‘experts’ would be thrown in for some. See Ray Stewart of West Ham United and of course our very own Phil Neal.

English football was resolutely 4-4-2 for a very long time however. Full backs, be them right backs, or left backs could be easily compartmentalised. It’s wildly different now though.

Roy Evans’ 3-5-2 formation did much to muddy the once clear waters at Anfield.

Well, it really did happen. They were still compartmentalised. Wing backs were born. It was OK to be defensively questionable if you were a wing back, because in theory you had an extra central defender and a deep lying midfielder to cover for you while you bombed up field.

Within a 3-5-2 formation the wing back role was the most forgiving position on the pitch. Yes, a player was required to run up and down the line all day, but the forgiveness came from the crowd. No one filling the position was a ‘career wing back’. Even now you can’t name many players which you would bill as being a career wing back.

In theory, Moreno and Nathaniel Clyne play as far up the pitch as Roy Evans wing backs did, but without an extra central defender as cover. Without a dedicated defensive midfielder as cover.

This isn’t an act in the defence of our much derided defenders, as they still need to do the basics right for the whole system to work, you know, like, don’t give away needless penalties and don’t give the ball away with poor passes in your own half with just over a minute on the clock.

You need a strong constitution to be a modern day full back. They are a breed of footballer who are almost as exposed to critical scrutiny as goalkeepers are. They play that much higher up the pitch than their predecessors did, that often, just as with goalkeepers, any glaring mistake can be a fatal one.

When supporters cry out for a new left back I struggle to summon up an image of one I’d be convinced would offer an upgrade.

I fully subscribe to the thought that Liverpool FC haven’t had a ‘classic’ left back since Jim Beglin used to wear the number 3 shirt. Our best performers at left back since then have largely been right backs – Steve Nicol, Rob Jones, even Glen Johnson did a job for a while.

I wasn’t anti-Riise, I just felt he was better as a left sided midfielder. It was him being ridiculously one footed and that free kick routine being ‘found out’ which bugged me about him.

But he was great bombing forward. I always felt it was a shame that Gregory Vignal never quite worked out when he slotted in at left back behind Riise at left midfield.

I’ve always yearned for a return of the symbiotic link between a full back and his contemporary wide midfielder in front. A new Alan and Ray Kennedy, or a Nicol and John Barnes.

McAteer was arguably the first of a new breed of full back, because he did play right back for us when 3-5-2 was eventually jettisoned after the 1996-97 league title and Cup Winners’ Cup blow out. Caught between two stools as such. Not a full back by nature, but a wing back no longer. Not really a wing back to start with, but willing to play there. His eagerness to please brought the ire of the crowd. Full back demonisation was up and running.

In a world of the wonderful Rob Jones being the unreachable benchmark a Jason McAteer stood no chance of procuring long-term patience and understanding from the support.

McAteer was the prototype for current day full back in many respects. It was a position which all too often became an afterthought. Midfielders and centre backs way too often moved over to cover those roles.

Full backs are like a drummer in a band. People think it’s a doddle to do, but once you pick up the sticks it’s a different matter. James Milner will inevitably have an off day sometime soon. Lay off him when he does eh?

Jamie Carragher was arguably our last ‘stay put’ full back. Even then it was offset by a more offensive minded option on the other side of the pitch, be it Riise, be it Markus Babbel, whoever. We haven’t had a godlike full back since Rob Jones.

Alberto Moreno is just the latest in an ever increasing line of easy to criticise full backs. Take a deep breath and count to ten. It is a role that isn’t going to become harmonious any season soon, no matter who plays there.

It isn’t as simple as saying our full backs are shit. There is a domino effect in operation. They do need to do more to help themselves, but the system needs to look after them better too.