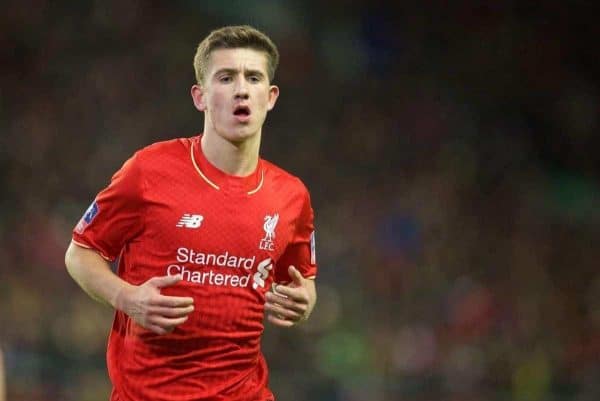 Liverpool midfielder Cameron Brannagan is set to become the latest to leave the club on loan this summer, as he is poised to join Wigan Athletic.

The 20-year-old has featured heavily throughout the Reds’ pre-season campaign, including both on the domestic stage and during their pre-season tour of the US.

But with competition rife in Jurgen Klopp‘s midfield ranks, Brannagan is set to spend the 2016/17 campaign with Wigan.

The Liverpool Echo report that Brannagan will complete a season-long loan move shortly, with the Latics agreeing to field him in at least 75 percent of their competitive games.

This will give Brannagan valuable experience of first-team football, which would be hard to come by on Merseyside.

Emre Can, Jordan Henderson, Georginio Wijnaldum, James Milner and Marko Grujic are among those challenging for a starting role in the middle of the park in 2016/17.

Speaking in July, Brannagan said he was “happy to talk about” a summer loan move in order to continue his development.

“I’m only a young lad and loans are a big thing at my age—going out and experiencing what it’s like to play,” he said.

“I don’t really know what I’ll be doing yet; I’ll speak to the gaffer about it in my own time and when the gaffer wants to speak to me, I’m happy to talk about it.

“But I’m just going to keep training and working hard, and when the games come try to impress the manager as much as I can.

“That’s my aim this year—train hard and work hard and see where it takes me.”

Wigan are managed by former centre-back Gary Caldwell, who led them to promotion from League One last season and is looking to stabilise their position in the Championship in 2016/17.

Brannagan will become the second Liverpool player to join the Latics on loan this summer, following goalkeeper Adam Bogdan.

The midfielder is likely to sign a new long-term contract before he completes his move.