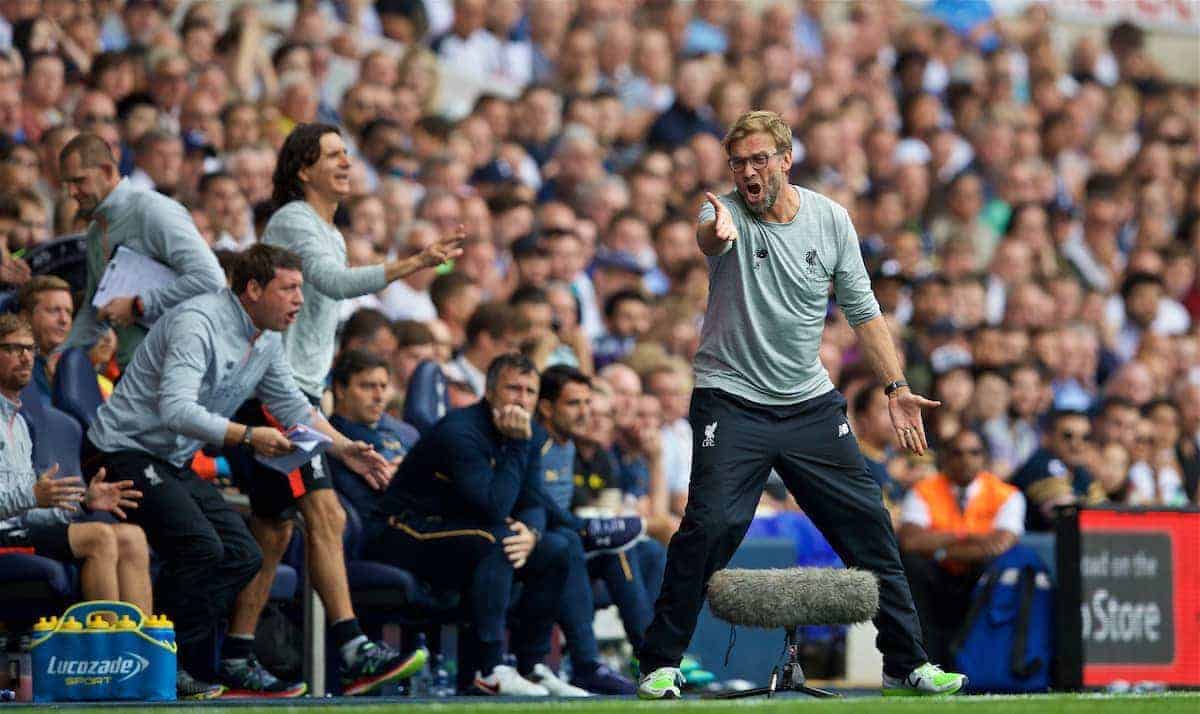 Liverpool traveled to White Hart Lane for their final Premier League clash ahead of the international break and secured a 1-1 draw against Spurs.

Joel Matip made his Premier League debut for the Reds and impressed as Philippe Coutinho returned to the starting XI.

Daniel Sturridge was a sunken figure on the bench as Roberto Firmino was given the nod ahead of the England striker and James Milner continued his duties at left-back.

The game started with a good tempo as both teams looked to attack early on and Coutinho could’ve put Liverpool ahead within ten minutes.

The Reds were on top in the first half but despite several chances they were unable to convert until Firmino was brought down to give Liverpool a deserved penalty.

The deadlock was broken when James Milner fired the spot-kick into the back of the Spurs’ net and Liverpool continued to attack fearlessly with Sadio Mane impressing once again.

A disallowed goal in the 55th minute could’ve doubled the Reds’ lead but it was Tottenham who scored the next despite Liverpool’s dominance.

Danny Rose fired in the Spurs equaliser as Liverpool fans rued the earlier chances that were missed and Klopp’s side had to settle for a point.

Here’s all the best reaction to the draw.

Sometimes players like Lallana and Coutinho (for all their skill) just need to put their boot through the ball! #LFC

Really frustrating result for #LFC . They dominated the game but the attackers failed to find the final ball or take their chances. Wasteful

Whoever suggested Mané wasn't good enough was wrong. He can pass, tackle, shoot, press and works his fucking nuts off

Any credit allowed for Henderson? Or will I get hounded off Twitter?

focusontheissues on the This Is Anfield live stream
“Out played them for 71 minutes and then a brain fart.”

@HenryJackson87 Matip's athleticism has been impressive! Especially noticeable when he pushed all the way up, putting pressure on Spurs' D.

If Matip shaves that moustache, he'll be the best Center Back in the league

Think Mane will be just what we need after losing Suarez, passionate, fierce and can score goals from absolutely no where??? #LFC

Will pay you £10 million to not take Mane to the AFCON, @FootballSenegal

Always a shame not to win when you're the better team, but a point is fine. Plenty of positives. Really good for large chunks. #LFC

Igniz on the comments section
“What a debut from Matip. Calm, assured, fearless and robust when he needs to be. Looks skinny and thin, but has a good brain on them shoulders.”

Mané has played three games for us, and been the best player on the pitch all three games.

Gutted about that. Absolutely battered them and what a great chance to win it at the end

#LFC fearless in attack in the first half but missed chances came back to haunt them. Good draw but feels like a loss. Total domination.

Why bring on Sturridge in the 87th minute? He had no time to do anything? He had to be brought on earlier #LFC

kusanagi on the TIA live blog
“Good result. Should have been better. Shame about last week’s result against Burnley, makes this week’s seem worse.”

Absolutely love Joel Matip. He never panicks, is aggressive and can pick out a pass. Looks a leader too. Solid debut #LFC

Spurs are good team & a point at White Hart Lane is not a bad result. But not today. Today We dropped 2. Can't help but feel disappointed…

Spurs 1 Liverpool 1. FT. Liverpool will feel they should have had that wrapped up before Spurs finally roused themselves.

Full range of emotions for the #LFC boss today pic.twitter.com/FKbJplVzc2