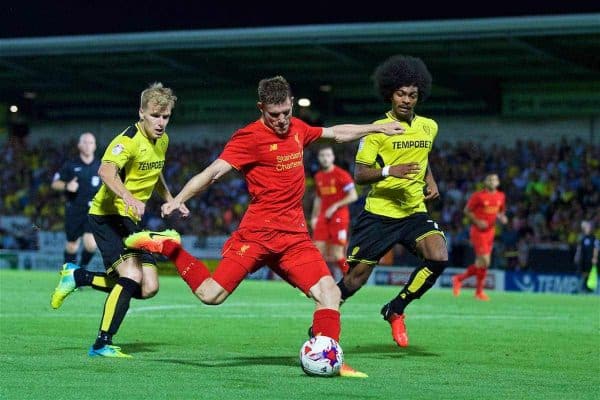 Following Liverpool’s 5-0 League Cup thrashing of Burton Albion, we take a look at how the local and national reporters assessed an enjoyable night for the Reds.

Jurgen Klopp’s side made light work of the Championship outfit at the Pirelli Stadium to book their place in round three of the competition.

First-half strikes from Divock Origi and Roberto Firmino put the Reds in total control, and Klopp’s men made sure their dominance counted for something after the break, with an own-goal from Tom Naylor and clinical brace from Daniel Sturridge sealing a comprehensive win.

Though against second-tier opposition, the Reds produced the perfect response to bounce back from Saturday’s bitterly disappointing loss at Burnley, and the victory will provide a welcome confidence boost ahead of Saturday’s trip to Tottenham.

Here is what the media made of an enjoyable evening of football.

Though a result that won’t fully prove Liverpool have learned lessons from the woeful Burnley display, reporters praised the Reds’ strong response to ensure they bounced back immediately.

Stuart James of the Guardian wrote:

It will take more than an emphatic victory over Burton Albion to provide evidence that Liverpool are back on the right path after Saturday’s sobering defeat at Burnley but Jürgen Klopp’s side did all that was asked of them on an evening when the chasm in class was every bit as wide as the scoreline suggests.

This was the perfect tonic as all the negativity generated by that tame league defeat to Burnley was swatted aside.

This was a test of attitude and application in modest surroundings and Liverpool passed it with flying colours.

Everything that was absent at Turf Moor on the weekend was there in abundance in east Staffordshire on Tuesday night.

ESPN’s colleague Steven Kelly felt it was a productive response on a night the Reds rediscovered their goal-scoring touch:

One or two injury worries aside, this was a good workout for a team that needed to rediscover its shooting boots after a dismal league defeat at Burnley on Saturday.

Certain reporters focussed on an improvement in Liverpool’s attacking speed and movement, which, though coming against second-tier opponents, was certainly much better.

Liverpool kept a cool head against Nigel Clough’s side. Again they had the overwhelming majority of possession, but this time they used their lengthy time on the ball to great effect.

Here was the Liverpool which triumphed at the Emirates on the opening weekend as they attacked with both verve and invention.

Just like at Turf Moor three days earlier, Liverpool dominated both possession and territory. But this time there was a much greater tempo and purpose to their work in the final third.

Their foot was soon placed on Burton’s throat and wasn’t released until the final whistle.

Goal’s Melissa Reddy noted the improved speed and decisiveness in the forward play, aided by willingness from midfield to contribute:

Liverpool had their hosts chasing shadows for much of the game, spilling forward en masse at every opportunity.

The amount of support in the box for both goals will please Klopp. The second had Henderson, Lallana and Origi all waiting to attack Clyne’s delivery. Had Origi not converted the opener, Firmino, Lallana and Emre Can were ready to profit from Mane’s fine work.

Pearce also felt the Reds were better balanced with Emre Can back in the team:

The balance of the team looked so much better with Emre Can back in the holding midfield role.

Can provided the platform for Liverpool to wreak havoc as he protected the back four and kept his side on the front foot.

David Maddock of the Mirror agreed:

Emre Can made his first start of the campaign, and offered Liverpool a sounder midfield platform to pass and build from, with his calm control in the middle.

Henderson benefited from playing alongside Emre Can, the kind of “hard midfielder” of which Klopp lamented the absence at Turf Moor.

He is far from at his best, that’s true. But Henderson has enough credit in the bank – and the stature as skipper – to be given the opportunity to play himself back into form in a position that makes the most of his undoubted attributes.

Turning in a man-of-the-match display on his return from injury, reporters heaped praise on Sadio Mane who shone in an influential performance.

The Senegal international, who sat out the loss at Burnley to nurse a minor muscle injury in his shoulder, was back in the starting XI at the Pirelli Stadium – and the difference he made was indisputable.

His ability to annihilate his marker from a standing start, his desire to drive his team on to the front foot and his appetite to be a nuisance in the box all contributed to Liverpool’s opener.

Mane clearly makes a big difference to this Liverpool side, providing not just pace and strength on the right, but also an elusive predictability that was painfully lacking at Burnley, where the Reds couldn’t break down massed ranks of defenders.

The Senegal striker may sometimes be infuriating, but he can be impossible to mark, and that will be important for the Reds when they face lesser sides this season.

Sadio Mane is already proving he can be the main man for Liverpool.

The £30million summer signing was influential throughout this canter and already appears indispensable, after missing Saturday’s 2-0 defeat at Burnley with a shoulder injury.

Another excellent performance, which offered a grim reminder of the pace and cunning Liverpool lacked at Burnley. Brilliantly created the opening goal and probably should have a penalty, his superb wing play also helped Sturridge to his second and Liverpool’s fifth. Chasing and harassing opponents right to the final whistle, Mine is becoming a crowd favourite quickly and seems ideal for Klopp’s style.

Pearce labelled Mane the “star of the show”:

Yet the real star of the show was the returning Sadio Mane, who carried on where he had left off against Arsenal on the opening weekend.

How Liverpool missed the £30million attacker at Burnley. Mane had a hand in four of the five goals and tormented the Brewers’ overworked backline throughout.

On a balmy evening in Staffordshire, Sadio Mané was the pick of the bunch.

Returning to the starting lineup after missing the Burnley match with a shoulder injury, the Senegalese was a constant threat as he wreaked havoc with his searing pace. At times he was almost unplayable.

Reporters focussed on the battle for Liverpool’s first-choice striking role, with Divock Origi and Daniel Sturridge both scoring in the win.

It is Divock Origi most likely to provide it, with the Belgian looking much sharper than his rival, and more prepared to offer the pressing game around the opposition box the manager not just desires, but demands.

Origi is still a little raw, but he provides a real focal point to this side, and he could stay in it for a while.

Origi has the talent and grace that is needed for a striker to thrive in the penalty area. His finish for Liverpool’s first goal may have looked simple, but it required quick-thinking and fast reactions from the 21-year-old to deftly backheel Mane’s pass, which was behind him.

Sturridge himself got on the scoresheet late on, but the starting job up top appears to be Origi’s for now.

Two goals from Daniel Sturridge hold out some hope that he can make a lasting contribution to Liverpool’s league form this season.