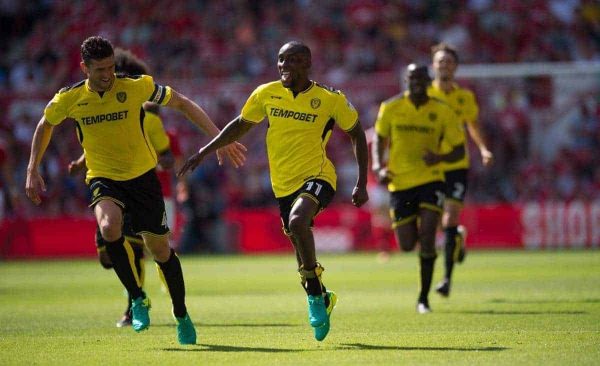 Liverpool’s League Cup campaign kicks off on Tuesday evening as they travel to the Pirelli Stadium to face newly promoted Championship side, Burton Albion.

Burton secured promotion to the Championship last season after a strong campaign in League One.

They beat Walsall to snatch the second automatic spot and Nigel Clough’s side look set to make a firm challenge in the English second tier this season.

Whilst Liverpool come into the competition at the second round as runners-up, Burton Albion defeated Bury 3-2 in extra-time to make it through the first round.

This will be the first clash between the two sides, leaving the Brewers something of an unknown quantity ahead of Tuesday night.

We caught up with one of their supporters, David Turner (@dturner1997), to get the lowdown on Burton.

Firstly, how do you think Burton Albion will do this season?

It’s hard to judge where we will finish with the Championship being such a tough league and anyone can beat anyone, but I think we will be able to avoid relegation and spend a second season in the Championship.

How did you rate your pre-season campaign and how well do you feel prepared for the new season?

I think our pre-season campaign was successful in many ways, registering two positive results against Queens Park Rangers and Stoke City as well as building the chemistry in the team.

I feel the friendlies we played have prepared us well for the season.

What are your realistic expectations for Burton this season?

Realistically, even to finish out of the relegation zone on goal difference would be good enough for me!

But as long as the team give it a good go all season, I don’t mind where we finish.

Who are your star men and who do Liverpool need to be wary of?

I think it could depend on who we play. We have a threat in Tom Naylor, who plays in midfield and has scored three goals already this season.

Lloyd Dyer on the left side could trouble you with his pace and Jackson Irvine has height and great heading ability.

What are your team’s strengths and what should Liverpool expect?

We have scored 12 goals in our five competitive games so far this season, and we have been one of the most creative forces in the league so far.

What do you think about your manager, Nigel Clough?

I think Nigel has done a fantastic job since he came in, finishing off Jimmy Floyd Hasselbaink’s job.

He has brought entertaining football back to Burton Albion and it’s exciting to see.

How do you rate Liverpool’s squad this season?

I think Liverpool have a very strong squad and will do well this season. The additions Jurgen Klopp has made really show intent to be a top-four side this season.

What is your opinion on Jurgen Klopp?

He’s a really entertaining manager but is also very knowledgeable tactically—there’s not many better in management.

Where do you think Liverpool will finish in the Premier League this season?

I think Liverpool will definitely be top six, maybe top four, depending on if players such as Roberto Firmino and Philippe Coutinho stay fit.

What are your predictions for the game?

I predict a lot of goals, hopefully it will be a two-sided game, but depending on who Liverpool play, we could grab a win out of the game.

Finally, what would a win on Tuesday mean for Burton?

It would be an absolute dream to beat a team of Liverpool’s quality and to progress through to the next round.