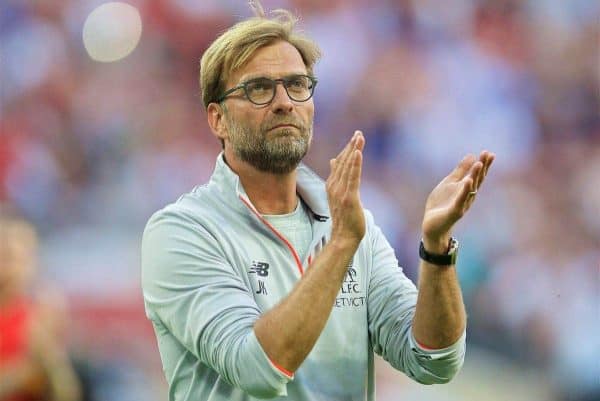 Jurgen Klopp: “I cannot give everyone the opportunity to play”

Liverpool manager Jurgen Klopp has warned some players to expect to be disappointed as he does not intend to use cup competitions to give fringe players a run out.

With no European football this season there is less pressure on the squad than there was during the 63 matches they were involved in during their run to the Capital One Cup and Europa League finals in the previous campaign.

Klopp is keen to establish some rhythm having seen his side fire blanks in losing at Burnley just a week after beating Arsenal at the Emirates Stadium, but wants his players to fight for their places.

It means changes will be kept to a minimum for Tuesday’s EFL Cup at Sky Bet Championship side Burton, leaving some players frustrated.

“We will make changes but not big changes, it is not really likely we change seven or eight positions,” he said.

“Of course we respect the opponent but it is not the moment to rest someone but we have a few players who are now in a good shape and they have two weeks’ more pre-season, if you like, more to train.

“I cannot give all players together the opportunity to play. Sometimes we have to work longer to change the situation.

“Of course each week in which they can’t or didn’t play it is not too good for a player but that is how it is in football, you accept this when you start playing the game.

“The only thing a player can do is work as hard as possible, to perform in each session and then the manger has to make a decision.”

“There was not enough desire in the last third. We had so many moments around the box where we could have made better decisions,” added the German, who is likely to give Belgium striker Divock Origi and new centre-back Joel Matip their first starts of the season.

“We could have done much better. When we were ready for crossing we had no-one in the box and that makes 0.0 percent sense.

“That is what I mean when I speak about desire. We had so many shots from outside [the box] and sometimes you have to try but it looked too early and kind of desperate.

“To create something like a real mentality you need time. The first game [against Arsenal] was very good, the second game not, so what’s the truth now?

“There is no pressure in this moment, it is more a chance to bring the Liverpool train in the right direction and that is what we want to do.”