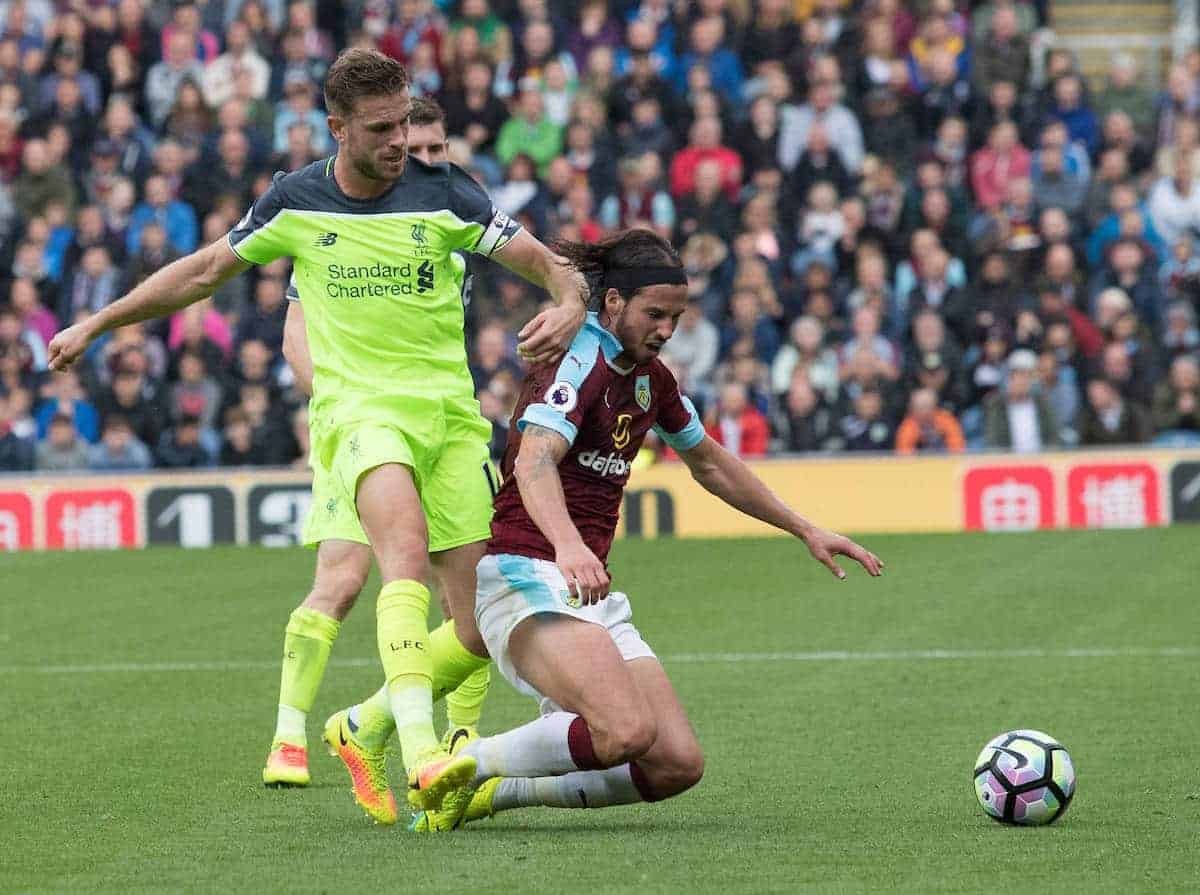 Liverpool’s second game of the season ended in defeat as the Reds’ poor performance led to a 2-0 loss against Burnley at Turf Moor.

Daniel Sturridge and James Milner returned to the starting line-up but failed to make an impact whilst Sadio Mane, who was kept out of the squad due to a shoulder injury, was missed.

After a week of heavy criticism, it came as no surprise to see Alberto Moreno dropped to the bench but Liverpool’s defensive woes continued as Burnley scored within the opening two minutes of the game.

A misplaced pass from Nathaniel Clyne saw Sam Vokes fire into the top of the net to score the Clarets’ first goal against Liverpool in the Premier League era.

Burnley sat back and allowed Liverpool to press forward but the Reds were unable to break down their defence and the home side continued to cause problems on the counter-attack.

Andre Gray grabbed Burnley‘s second after Sturridge lost the ball in the attacking half and the Clarets took advantage of one of many successful counter-attacks.

The result mirrored the score in March 2015 when the two sides last met, with Liverpool coming away as 2-0 victors. Instead, Liverpool fans were left pondering whether their defence will ever strengthen up and if they’re in for another inconsistent season.

If we've bought Wijnaldum to be this deep, it's going to be a massive waste of money.

Inexcusable. Klopp or not. No LFC team should be loosing 2-0 to Burnley. Home or Away

Oh Liverpool, you really are painful to support.

charliewah on the This Is Anfield live blog

Conceded 5 in two games, what are they doing in training?

Beating Arsenal then losing to Burnley is typical Liverpool, and until we eradicate this inconsistency, we'll go no where in the league.

Left-backs Liverpool could target before August 31…?

Hau5fly on the This Is Anfield live blog

This pattern needs to be broken, one good win followed by one poor loss is going to get us nowhere, well actually about 8th. So no change then

Interesting that we've conceded 2 goals without the so called defensive weak link playing. Almost like our defence as a whole isn't good..

Dunno what's a bigger eyesore, those kits or the performance? #LFC

Again, it goes to show how important it is to have a strong defence. Attacking talent is nothing if you can't stop the other team scoring.

Over £60m spent but this looks like the same team as last season. Spineless & struggling against lesser clubs. #LFC pic.twitter.com/fQuYCe9MEt

Whatsinaname? in the comments section

Spineless, gutless performance. No leadership in the centre. 10 more days to make some signings and fix this mess. Strip Hendo of the captaincy to start with.

#LFC have had the right idea, but have just not been patient or surgical enough in their execution, leading to frustration and costly errors

Onero on the live forum

LFC – most consistently inconsistent team in the EPL.

Easy to write games like this off as a bad day at office – but if you want to succeed you get something out of bad days. We rarely do. #LFC.

Rubbish performance, no guile, no tempo, no patience, no shape defensively in transitions. Better learn fast from that, Klopp & players.