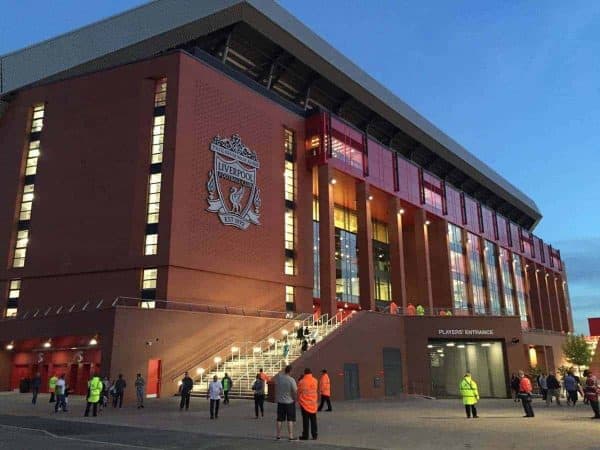 Anfield was officially unveiled to the public at a test event on Friday evening, following extensive redevelopment work this summer.

Liverpool owners Fenway Sports Group implemented long-standing plans to expand Anfield’s Main Stand this summer, along with improving areas both inside and outside the stadium for 2016/17.

This work brings Anfield’s capacity up to 54,167, providing the Reds with an excellent base to challenge in the future.

The club opened the stadium doors to 5,000 supporters on Friday evening, in an event for the test safety certificate requirements, with 10,000 more due at a second event on Monday.

While still a work in progress, outside presents a significant improvement on Anfield’s previous exterior, particularly with the development of Paisley Square and 96 Avenue.

This is home to the Hillsborough memorial garden and a number of trees from Jurgen Klopp‘s homeland of the Black Forest.

There is also a new player’s entrance, providing a much more suitable way into the ground for Klopp and his squad.

Concerns over potential restricted views from within Liverpool’s new Main Stand have been allayed, with supporters not set to miss anything from the Upper Tier.

Meanwhile inside, the supporter facilities have been upgraded hugely, providing a much more enjoyable experience for matchdays.

Meanwhile, looking out there are stunning views across the city of Liverpool, and the surrounding area of Anfield.

Liverpool received special dispensation to reverse their Premier League clashes with Burnley this season to ensure work is complete.

Therefore Jurgen Klopp‘s Reds will first take to Anfield for a competitive fixture when they welcome champions Leicester City to Merseyside on September 10.

This promises to be an emphatic evening of football, with a phenomenal backing expected at the redeveloped Anfield.