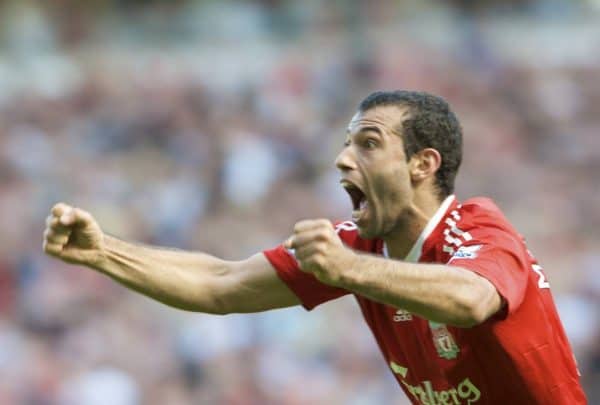 Javier Mascherano has returned to the Barcelona squad following his summer holiday, and along with Luis Suarez, could face former club Liverpool at Wembley on Saturday.

The 32-year-old has enjoyed an extended break, following his summer exploits with Argentina at Copa America Centenario, and is now set to meet up with his Barcelona teammates.

The Blaugrana are currently on a pre-season tour of Europe, and having beaten Celtic 3-1 on Saturday, they face Premier League champions Leicester City in Stockholm on Wednesday evening.

The final game of their tour comes against Liverpool this weekend, which should mean Mascherano takes to the field against his former employers.

The midfielder became a fans’ favourite during his time at Anfield between 2007 and 2010, enhancing his reputation as one of the world’s best defensive midfielders.

He has since gone on to enjoy extraordinary success with Barcelona, winning four La Liga title and two Champions Leagues and being a key component of one of the greatest club sides in history.

Used primarily as a centre-back during his time at Camp Nou, Mascherano has shone in the role, and looks set to continue there, having signed a new deal last month.

Also facing Liverpool will be Suarez, who is sure to receive a rapturous reception from the Wembley crowd, after his incredible exploits as a Reds player.

It will be the first time El Pistolero has come up against the Merseysiders since leaving the club two years ago, in a monstrous £70million deal.

The Wembley showdown will be the biggest test of Jurgen Klopp‘s men so far this summer, and is the penultimate game of their nine-match pre-season schedule.

Liverpool take on Klopp’s former club Mainz just 24 hours after the Barcelona match, so it will be interesting to see how their starting line-up looks on both occasions.