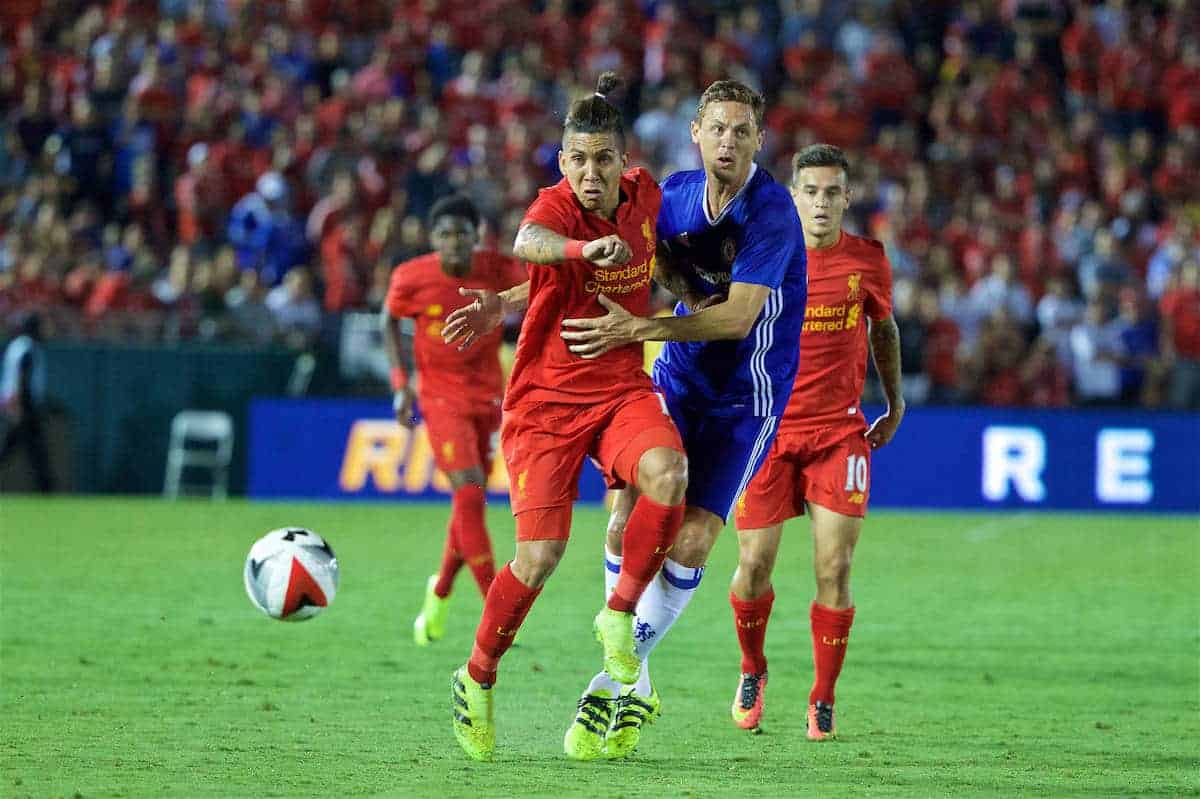 Liverpool face Chelsea at Stamford Bridge on Friday night, with Jurgen Klopp‘s side looking to build on last weekend’s 4-1 thrashing of Leicester City.

It was a stunning start to life at a new and improved Anfield last Saturday, as the Reds dispatched of the champions with consummate ease.

Goals from Roberto Firmino, Sadio Mane and Adam Lallana saw Liverpool easy to victory, and not even Lucas Leiva‘s calamitous error to gift Jamie Vardy a goal could dampen the spirits of Reds supporters.

Seven points from their opening four Premier League matches is a solid return from Klopp’s men, especially when you consider the difficult start they have had.

The tough games keep on coming and attention now turns to Friday’s crucial match-up with Chelsea in west London – where Liverpool enjoyed their first win under Klopp’s reign last season. Antonio Conte has come in and made an immediate impact for the Blues, with three wins and draw representing a very strong start to the campaign.

Chelsea have sealed victories against West Ham, Watford and Burnley, and their 2-2 draw away to Swansea City on Sunday should really have been another three points.

Watching the differing but similarly passionate styles of Klopp and Conte should make for fascinating viewing on Friday, both in terms of their respective team’s performance and their touchline antics.

A win for either side would be a real statement of intent, particularly Liverpool, who will be on cloud nine if they can get another positive result away to a rival.

The bragging rights are on offer, in a rivalry that only really ignited during the days of Rafa Benitez and Jose Mourinho in the mid 2000s.

We got the thoughts of Chelsea fan and Stamford Bridge regular Richard Long ahead of Friday’s game.

What do you make of Chelsea‘s start? And which player has impressed most?

I’m delighted with the start. We are creating lots of chances and there is already a noticeable change in mindset of the players compared to last season. You can see the hunger has returned.

Diego Costa has been our best player. He’s in brilliant physical shape compared to last season and has already got four goals this season.

You must love Antonio Conte, given his charismatic nature and winning mentality?

Yes, it was obviously sad to see Mourinho get sacked but the fans have really taken to Conte. I love his passion but I think more importantly, Chelsea fans are just happy that people are focussing on our football rather than off-field antics concerning the club.

Which Liverpool players scare you ahead of the game?

I’m terrified of Daniel Sturridge. When fit he’s one of the best strikers in the league and he could cause David Luiz real problems. Philippe Coutinho is the other main worry – he can be brilliant when he wants to be!

Hit us with your prediction. How will the game pan out?

I’m very confident given our start to the season. Going for a comfortable 3-1 and a miserable train journey home for the Liverpool supporters.

I think it will be fast-paced and very open. I just can’t see Liverpool’s defence dealing with our front-three. They had gone an unfathomable 86 home matches unbeaten in the Premier League, with Jose Mourinho, Avram Grant, and to a lesser extent Luiz Felipe Scolari, all making it a fortress.

Benitez’s Reds produced one of the great away performances of the last 10 years, however, on an afternoon that proved they were genuine title contenders.

The game’s only goal came in the 10th minute, with Xabi Alonso’s left-footed strike deflecting off Jose Bosingwa and past Petr Cech.

From that point on, Liverpool never looked remotely in trouble, and their discipline, intelligence and quality of football all stood out.

Alonso was unfortunate not to get a second, with his second-half free-kick cannoning off the post, and Chelsea barely threatened at the other end.

The travelling Reds supporters went wild at the final whistle, and there was a feeling that something special was potentially on the horizon.

There have been more emphatic, memorable away triumphs from Liverpool down the years, but to end such an astonishing record was testament to how great that 2008/09 side was.

Away fans’ pub: The Hollywood Arms and The Imperial (to drink); El Metro and Aglio Olio (to eat)

Advice: Try get the overground from Clapham Junction to West Brompton or Imperial Wharf and walk if you can, it’s easier than the underground. Those who drive should maybe look to park near the Chelsea harbour in Imperial Wharf; reasonable rates and only 10 minutes walk. Klopp’s squad is looking far more healthy than it did at times last season, with the majority of key players available and fitness levels high.

It will be interesting to see if the Liverpool manager makes any changes to the starting line-up that brushed aside Leicester with such ease, particularly in attack.

Philippe Coutinho only appeared as a second-half substitute, and with Mane, Firmino and Daniel Sturridge all playing so well in tandem, there is no guarantee that he will start.

Using Klopp’s past line-ups against top sides as a gauge, however, it would not be a surprise to see Coutinho replace Sturridge, with Firmino leading the line.

Dejan Lovren is available, having recovered from a severe black eye, and the Croatian should replace Lucas at centre-back.

Emre Can is back in full training following an ankle injury, but the manager says he needs more time before he can be considered.

The same applies to Loris Karius, who despite now being fully fit, will probably not make his Reds debut until next Tuesday’s League Cup third round clash at Derby.

Joe Gomez is still absent, although Klopp has been boosted by the news that the young defender will return next month.

For Chelsea, their only major piece of injury news is that captain John Terry will miss the game with a foot problem, having spent the final seconds of the draw with Swansea in considerable pain.

That means David Luiz will make his first appearance for the Blues since re-signing from Paris Saint-Germain in the summer, which promises to make for very interesting viewing.

Klopp believes experience is the one thing Chelsea have over his Liverpool side:

“Experience, when you use it right, makes you stronger and that’s their only real advantage: they are more experienced.

“But we are the challenger and we want to go there and create real problems for them. That’s how it is. We want to be strong in our kind [of play] and get a result.”

One to Watch: David Luiz With Luiz set to make his second debut for Chelsea, all eyes will be on the Brazilian to see how he performs.

Somewhere inside him lies a very talented footballer, and if he put his mind to it more consistently, he could be world-class.

Too often, however, the 29-year-old is a defensive shambles, and his unpredictable antics can have a damaging effect on his team.

That said, he possesses great set-piece taking ability – he has scored some spectacular strikes over the years – and he has a winning mentality that can sometimes be invaluable.

It seems impossible not to see Luiz being heavily involved on Friday, one way or another.

Chelsea are the favourites to leave west London with all three points, with the bookies offering odds of 5/4 for a home win.

Liverpool are 21/10 to win at Stamford Bridge in the Premier League for just the sixth time, while the draw is 12/5.

The match is live on Sky Sports 1, with coverage getting underway at 6:30pm (BST) with kick off at 8pm.