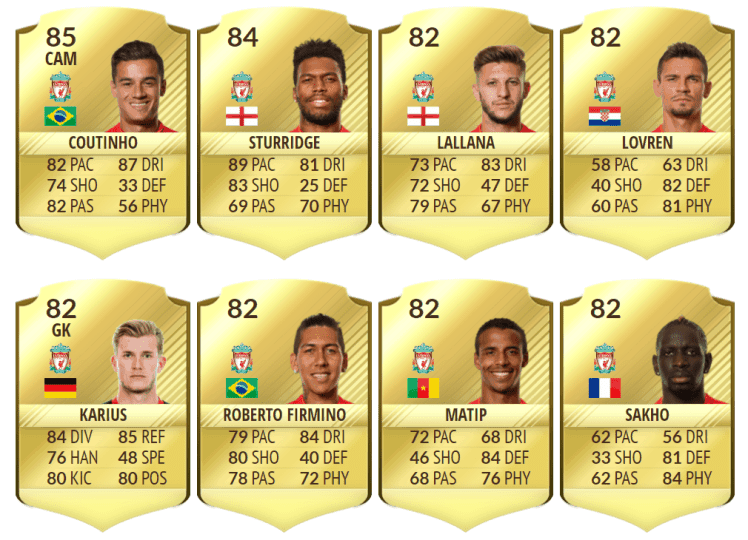 With the hotly-anticipated release of FIFA 17 edging closer, the ratings for Liverpool’s players have been revealed.

The new game is released in the UK on September 29, as football fans get to enjoy the new-look 2016/17 Reds squad in all its video-gaming glory.

There is always much debate as to who the highest-rated Liverpool player will be when the annual FIFA game is released, and perhaps unsurprisingly, Philippe Coutinho comes out on top this time around.

The Brazilian has an overall rating of 85, including 87 for dribbling, while a number of his attacking teammates are not far behind.

Daniel Sturridge is 84, although his pace rating of 89 is slightly questionable, and in-form Roberto Firmino is given 82.

Adam Lallana‘s 82 suggests he is now almost at the same level as Coutinho and Sturridge, and on a par with Firmino, following an excellent 11 months under Jurgen Klopp.

Liverpool’s most consistent player, Nathaniel Clyne, is fairly rated as 81 after a highly impressive first year at Anfield, while James Milner is the same. Divisive fellow full-back Alberto Moreno is 77.

Loris Karius (82) is comfortably better than Simon Mignolet (78) as the Reds’ highest-rated goalkeeper.

Joel Matip, Mamadou Sakho and the vastly improved Dejan Lovren are also given an 82, while Ragnar Klavan is 78. It suggests that there is now far more quality and depth at centre-back at Anfield.

In midfield, captain Jordan Henderson (80) just squeezes into the 80s, while Georginio Wijnaldum (81) is seen as narrowly superior to the Reds’ skipper.

Emre Can is rated at 80, having been criminally underrated on the new Pro Evolution Soccer game, while brilliant new signing Sadio Mane gets a rather low 79.